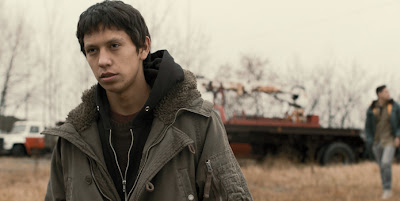 Based on the novel by Richard Van Camp, The Lesser Blessed is an important portrait of youth in Northern Canada. Told through the eyes of Larry Sole (played by newcomer Joel Nathan Evans), a teenage boy from the Ticho tribe in the Northwest Territories, The Lesser Blessed gives an unflinching portrayal of the problems affecting members of Canada's aboriginal communities, particularly the youth. As indicated by the burns that cover Larry’s back, which are shown in close-up in the film’s opening sequence, he grows up in life marked by scars of violence.

Larry spends most of the time trying to fit in with the other students in his class at the aptly named R.V. Camp High. Tensions abound between the indigenous students and the white kids, especially between Larry and the local jock whom he dubs “Moose Dick.” When he’s not hiding from Moose Dick, Larry pines for Moose Dick’s girlfriend, Juliet (Chloe Rose). In addition, when racial tensions aren’t dividing the kids or preventing them from falling in love, all the students at R. V. Camp High like to comingle and rowdily guzzle cheap booze and smoke some drugs.

Whether it’s simply the monotony of the grey northern landscape or a burgeoning trend in the recklessness of youth, the kids of RVCH desperately need care. Particularly so are kids like Larry, who are tormented by violence and intimidation, both from their peers and from their own family. As Larry copes with drugs and finds himself in a tailspin, writer/director Anita Doran crosscuts to flashbacks that show him as a victim of abuse at the hands of his father. Larry’s past reveals the lateral violence rippling through families and Native communities. Rooted in the legacy of Canada’s residence school system, this history of violence has crippled a group of students who were born into a generation struggling to heal their wounds.

The Lesser Blessed intertwines myth and folkloric imagery into Larry’s reawakening, and the crows and wolves to which the film cuts have considerable resonance. The film also feels firmly rooted in realism (to steal a phrase from Ms. Monk), and The Lesser Blessed fills its cast with newcomers in addition to strong veterans such as Tamara Podemski and a notable Benjamin Bratt. The Lesser Blessed might be a bit heavy in its realization of such weighty subject matter and the drama itself might not be as rich as its message, for the film asks Evans to carry a bit too much of the weight for a first time performer. Nevertheless, The Lesser Blessed makes an invaluable step forward in terms of onscreen representation needed to aid the healing process.


The Lesser Blessed opens in Toronto on May 31 at Cineplex Yonge and Dundas.
It opens in Ottawa June 7 at Empire Kanata.