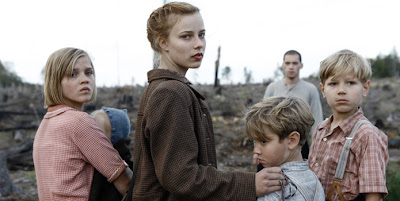 Lore is a brave, beautiful film. As Australia’s official submission for Best Foreign Language Film at this year’s Academy Awards, Lore is surely going places. The film marks the long awaited return of director Cate Shortland after her astounding 2004 breakthrough debut Somersault. As strong as Somersault was, though, Lore is a massive leap forward for Shortland.

The film is a haunting look at the aftermath of the Second World War for the citizens of Nazi Germany. The film looks at war from a perspective that is rarely seen or considered on film. It's surprising that few have tackled the subject of the youth of Nazi Germany, but Lore could easily remain the definitive work on the subject. The kids in Lore are certainly not hooligans of the Hitler youth, but they clearly could have been had the war gone in a different direction.

Lore, played a most impressive Saskia Rosendahl, is the eldest daughter of a Nazi officer. Lore's father and mother raised their five children to have unwavering devotion to the Führer, so Lore and her siblings are blind to the actual goings on of the Holocaust. Even as Lore’s mother, Mutti (Ursina Lardi), packs up the family’s valuables, burns countless stacks of paper, and teaches the kids how to barter for survival, Lore and the other children still believe in the strength of their leader.

The German officers are under siege and some are coming out of hiding with plans to surrender. Mutti eventually concedes defeat and packs up to join her husband at a camp, leaving Lore to tend to her four brothers and sisters, one of whom is a baby. Under Mutti’s advice, Lore takes the children across the Black Forest to their Omi’s house in Hamburg. It’s a long, arduous journey for their kids. They have no transportation, save for a carriage, and trains have long since stopped running, as Lore soon learns from travellers they meet along the way.

They have no food, either, and they must do as they must to ensure their survival. The baby proves as much an asset as it is a liability. Even though it cries throughout the night, passersby take extra notice at a screaming infant and are more apt to sympathize and offer food.

The central question of Lore is daringly complex. Namely, how does an innocent make sense of the world when everything she has been taught is a lie? Raised on patriotic songs and (presumably) the films of Leni Riefenstahl, the kids salute and cry “Heil Hitler” as naturally as they breathe.

Much like Komona’s retrospective account in Rebelle, the real horror of Lore’s journey is discovering how greatly she was duped by her parents and teachers. As Lore treks across the war-torn land and seeks shelter, she discovers signs the reveal to her the truth of her parents, her nation, and herself. Photos abound of Nazi atrocities and the reality of the image gives proof of the Nazis’ true actions, yet many of the adults Lore encounters deny the photos. They are simply staged by Hollywood, they say. However, Lore must confront her perception of the “filthy Jews” when the greatest ally on her journey becomes a young man who escaped the camps (Kai Malina). When few of her blonde-haired and blue-eyed countrymen offer help to Lore and her siblings, they are forced to rely on a man they were taught to hate.

Lore takes its depiction of Nazi faith even further when Lore comes to the end of her journey and faces her elders’ unwavering devotion to the Führer once again. Lore shows how easily Lore’s generation could have slipped back into the beliefs it was taught; however, as Lore performs in a defiant act of vengeance against one of her mother’s prized possessions, Shortland offers an evocative symbol that shatters hope of Nazi reprisal.

Thanks to the fearless approach of Shortland’s direction, not to mention her hand at haunting composition, Lore is a powerful and thought-provoking film. It’s a sumptuous thing of beauty, too, thanks to the gorgeous efforts by cinematographer Adam Arkapaw, composer Max Richter, and, above all, young Rosendahl in the title role. Lore doubtlessly stands among the most beautiful, intelligent, and praiseworthy films of the year.

Update: Lore opens in Toronto at TIFF Bell Lightbox on May 31