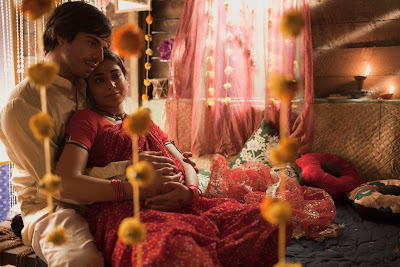 Saleem Sinai was born at the stroke of midnight on August 15, 1947. His birth coincided with the exact moment that the clock signalled the independence of India from Great Britain. A new child, a symbol of hope for the future of all of the new India, Saleem Sinai is a special boy indeed.

Midnight’s Children finally brings to the screen the acclaimed Booker Prize winning novel by Salman Rushdie. It’s a remarkable feat to see Rushdie’s novel transcribed to the screen. Not simply because of the size and scope of Rushdie’s novel (it’s a big ’un), but Midnight’s Children is an ineffably dexterous novel that enmeshes the history of India within a magical allegory. Rushdie’s voice is quite unique, so it must have been intimidating for any filmmaker to try to capture the tale of Saleem Sinai and his brethren of “Midnight’s Children,” the children who, like Saleem, were born into an India of home and promise but then grew up in a land of seemingly insurmountable class divides and political unrest.

Luckily, though, Midnight’s Children (the novel) finds a worthy counterpart in Canadian director Deepa Mehta. Best known for her elemental trilogy of Earth, Fire, and the Oscar-nominated Water, Deepa Mehta is no stranger to tackling bold and controversial stories that air the dirty laundry in order to tell the truth. Mehta’s bravery – evident in the fact that she ever agreed to the project in the first place – is only one factor that makes her a good fit to bring Sir Rushdie’s novel to the screen. Like Rushdie, Mehta also has a flare for mysticism and for blending fantasy and reality into a seamless cinematic tapestry. When Rushdie’s words meet Mehta’s eye, Midnight’s Children becomes a magical piece of cinema.

Fans of the novel will surely appreciate the care that Rushdie and Mehta take in adapting Midnight’s Children. Rushdie wrote the screenplay himself, so the adaptation shows clearly a refined retooling of the novel that peels straight to the pith. The film shifts the chronology of the novel and tells the life of Saleem Sinai from birth until the 30th anniversary India’s independence. (The novel skips all over the place as Saleem tells his tale.) Gone, too, is the voluptuous Padma – the most fun and loveable Padma! – who serves as the ear for the narration as Saleem talks in the framing device and embedded narrative of the book. The loss of Padma is one of the adaptations better strokes, for Saleem’s narration is read by Rushdie himself; however, instead of delivering the playful voice-over to the ample-bosomed Padma, Rushdie speaks to the audience directly and his singsong voice intimately enlightens the audience on the story of the Midnight’s Children.

The Midnight’s Children, or children of midnight, are a mystic clan that Saleem (played in his adult years Satya Bhabha) conjures up with his big runny nose. All the children born that night were endowed with magical powers – symbolic of the dangerous hope and independence enlivened in citizens of the new India – and Saleem assembles them during his moments of solitude. Within the Midnight’s Children is Saleem’s nemesis Shiva (played by Siddarth), who is very much the Veronica to Saleem’s Betty.

Shiva was born at midnight in the same hospital as Saleem. While Saleem was born into a family of lowly beggars, Shiva was the spawn of the upper caste. However, the dawn of independence worked its magic on Mary (a superb Seem Biswas), the nurse on shift at the hospital that night. Wanting to turn the promises of the new India into a reality, Mary decides to let the poor become rich and the rich become poor. In a gesture for equality, Mary swaps the babies and gives Saleem a chance at a better life.

In spite of his false noble birth, Saleem is jinxed for life. A clumsy boy with a big honking nose that runs like a tap, Saleem is an outcast among the wealthy. As such, he relies on the Midnight’s Children to grow strong and brave. He can lead amongst this new order of Indians.

Midnight’s Children spans the years of Saleem/India’s tumultuous history in its new beginning. The film packs in a wealth of detail and nuance from the novel, yet it nary has to explain the specificities of Indian history. The context always remains clear though, since the symbolism peppered throughout the film is rich and vibrant. Midnight’s Children remains wholly faithful to Rushdie’s dreamlike account of India’s history, yet it is a wholly cinematic envisioning, too.

Mehta creates a world like no other. Midnight’s Children seems set in an ethereal India. It might be the cadence of Rushdie’s narration or the playful tone of the actors (the ensemble as a whole is excellent, particularly Biswas and leading man Satya Bhabha), but Midnight’s Children is a glowing trip through allergoryland that will enlighten the most discerning of viewers. The film is meticulously crafted, too, with the lovely costumes by Dolly Ahluwalia being particularly eye-catching and the melodic score by Nitin Sawhney blessedly euphoric.

A magical, enchanting epic, Midnight’s Children is as powerful a reimagining of India’s history as Rushdie’s epic novel is. Riding high on the expectations that made it one of the hottest tickets at this year’s Toronto International Film Festival, Midnight’s Children doesn’t disappoint. Congratulations Deepa, Salman, et al: your film is tickety-boo.


Midnight's Children opens in select cities on November 2nd.
It opens in Ottawa on November 9th at The ByTowne and Empire Kanata.