TIFF Review: 'On the Road' 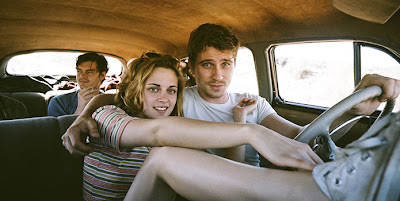 On the Road is an admirable effort to bring the great American novel – perhaps the greatest American novel – to the screen. Unfortunately, though, this effort by director Walter Salles and screenwriter Diego Rivera, the team behind The Motorcycle Diaries, veers into adaptation hell from the first minute that it translates the work by Jack Kerouac for the screen. On the Road is by no means a bad film, but it reveals the danger in bringing such a canonical work to the screen.

The main problem with On the Road is that it treats its material too reverentially. The script seems at pains to cite as many of the colourful characters whom Sal Paradise (Sam Riley) meets during his proverbial odyssey across America while on the road. The film essentially assumes that viewers have read the Kerouac novel (and judging by the crowd at the Bloor Hot Docs Cinema during the film’s screening at TIFF, many have), so those who haven’t read the novel will be as lost as Dean Moriarty. Fans who cherish their well-worn copy of the book may enjoy seeing as much of Kerouac’s work crammed into the screen as a decent runtime allows, but there are too many brief episodes in On the Road and only a few of them have any substance. Naturally, though, the filmmakers keep all the sex. (There’s lots of that!)

At the core of the story is aspiring writer Sal Paradise, who is working on a novel as he travels around America to experience the world and perform first hand research with his own eyes. Throughout Sal’s journey, he meets up with his best friend Dean Moriarty (played by Garrett Hedlund from Tron and Country Strong, who easily gives the standout performance of the ensemble). Dean is a drifter, both in the literal and figurative sense. The trip around America shows the directionlessness of young Americans in the post-war era. Driving around with nowhere to go and nowhere to be, the journey of Sal and Dean provides a symbol for Americans looking for change at a time when change was needed.

That sense of urgency is probably what made the novel speak to generation when it was published in 1957. It still connects with readers today because Sal’s poetic ramblings contain an anger and vividness that rings true no matter the era in which they are spoken. This film, however, just doesn’t seem to have much to say, or it simply can’t find the words to say it.

The style of the film is rather inconsistent. Sal offers some of the novels most memorable lines in sporadic voiceover narration, which might have helped the film dispense with some of the narrative babble and remain coherent had Rivera/Salles used it throughout. Some of the finer moments, however, are simply the languid shots of the friends driving across the road with frequent intercuts to the landscape or the expanse of the asphalt road continuing into the horizon. At the best of times, the film channels the jazzy beat of the era and literary movement Kerouac launched by telling the story in a quick tempo that is matched to a lively score: the trip to the Mexican whorehouse stands out as a notable sequence, no matter how brief it is. When the film uses the elements of cinema, rather than Kerouac’s own tongue, it finds its own voice in moments that allow viewers to experience the energy and vitality of Sal and Dean’s journey. The emotional sensations of these scenes connect with viewers regardless of whether they have read the novel.

The importance of On the Road is evident in the high roster of stars attached to the film, as is the film’s reluctance to cut Kerouac’s work. Viggo Mortensen, Amy Adams, Elisabeth Moss, Steve Buscemi, Alice Braga, and Terrence Howard are just some of the talents that make a cameo appearance along the road trip, but the film never leaves much of a chance for viewers to see how these characters illuminate a sense of America circa 1950. Even major characters, such as Dean’s on-and-off wife Marylou (played by Kristen Stewart), receive very little to do. Stewart is fine in the few scenes that afford Marylou any drama, but she is reduced to background noise for much of the film. Kirsten Dunst receives an ample part as Dean’s other wife, Camille, and creates some of the strongest scenes in the film. The ensemble is good overall, though, with Hedlund excelling and Riley doing okay in the limited lead role, for Sal Paradise is mostly an observer in the film.

On the Road has moments of greatness, but it never really jives on the whole. It looks great and sounds great, so it certainly has the feel of the era. However, it doesn’t say much about the era, so it all comes off as aimless drifting. Not a whole lot happens in Kerouac’s novel, but one would hardly say it’s about nothing.