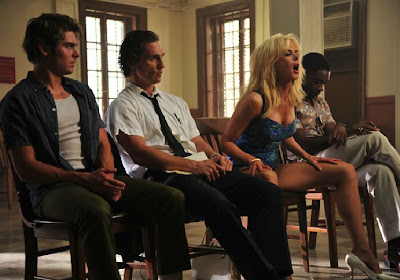 Dirty, violent, sexy, and sweaty, The Paperboy is 107 minutes of B-movie goodness. Like the sinful act of picking a pair of dirty undies off the floor and putting them on without a care in the world, The Paperboy is comfortable in its own filth. This is a film that is trash and knows it.

Lee Daniels, adapting the novel by Pete Dexter, takes viewers far from the hard life in the ghettos of Precious down to the honky-tonk American south circa 1969. (The choice of ’69 surely has nothing to do with politics.) The Paperboy takes place in the bayous of Florida, a land of vicious gators and racist white boys. As the film’s narrator, Anita (Macy Gray), explains, she witnessed the events in the film during her days as the housekeeper for a family of white folks. She is asked to give her version of the events that were described in a book by one of the implicated parties. Anita’s report of the events is a bit of a McGuffin, though, since her interview that prompts the return to the summer of ’69 never reappears, nor does it see any outcome. Additionally, the rules of the hillbilly racism prevent Anita from participating in the action. Consequently, most of what surmises onscreen is an account from someone who was not actually present for the event..

Anita certainly has a flair for imagination. There might be some truth in her story, which tells of the boy of her household (Zac Efron) and his involvement in a seedy ordeal to overturn a murder charge against a convicted killer (a slimy John Cusack). The boy, Jack, helps his brother Ward (Matthew McConaughey) cover the story for the city newspaper. Accompanying Ward on the investigation is his fellow journalist Yardley (David Oyelowo), a black Briton whose appearance in the country town is greeted by cusses and hostility from the local rednecks.

Also joining Jack’s strange band of renegade crime solvers is a white trash floozy named Charlotte Bless (Nicole Kidman). Charlotte is the pen pal/fiancé of Hillary, the felon they’re trying to set free. Charlotte is a saucy as a dish of southern fried cooking. Charlotte is a hussy through and through, a bleached-blonde hustler born and bred in the trailer park. This “over-sexed Barbie doll,” as Anita calls her, oozes sex appeal and knows how to flaunt it. Like The Paperboy itself, Charlotte is foul, vulgar, and downright nasty.

Jack is smitten with Charlotte on first sight. She’s the perfect object for his horny fantasies. Charlotte is also the lust-puppet for Hillary, so Jack is forced to watch his prized woman shamefully shed herself of her virtue whenever they visit the jail. In spite of all the watching, however, Daniels doesn’t beat around the bush when it comes to the carnal relations of these sex-crazed southerners. A true “wham, bam, thank you ma’am,” The Paperboy likes it rough and dirty. Daniels pushes the actors into provocative scenes – the violent sex scenes between Kidman and Cusack are especially incendiary – and he knows how to frame the contours and shiny sweatiness of their bodies with exploitative goodness.

Daniels seems especially fond of his leading man Zac Efron, who spends a good chunk of the movie dancing around the set in his tighty whities. (He even does a little romp in the rain.) Efron is far from the Disney days of High School Musical and he holds his own among the other actors in the camp. Macy Gray is also a hoot as Efron’s sassy housekeeper, who is a surely no descendent of Mammy. However, it’s Nicole Kidman who steals the show in her fearlessly unflattering performance as the renegade woman of loose morals. Charlotte gives Kidman the chance to return to the vampy seductiveness of her To Die For days, but she amps the camp value up the wazoo as she slinks her booty, mashes her gum, and pees on Zac Efron. (The golden shower scene truly lives up to the hype.)

A B-movie to the core, The Paperboy is a tasty slice of pulp fiction. The film marks a complete 360º for Daniels and his representation of race in Precious. The racism in The Paperboy is hyperbolic, with the portrayal of the white crackers deliciously so. The Paperboy never takes itself too seriously and neither should you. Viewers willing to go along for the ride will love the tawdry debauchery of The Paperboy. Bring fried chicken: The Paperboy is finger-lickin' good.

The Paperboy will be released in Canadian theatres on October 19th from D Films.