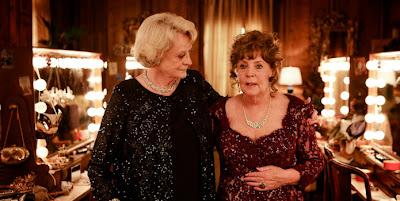 “Growing old ain't for sissies.” The proverbial Bette Davis line arises frequently during Quartet, which tells of a retirement home for aged artists. Beecham House is a bit like the Best Exotic Marigold Hotel, except that it offers group opera sessions instead of bed bugs and cricket. Like Marigold Hotel, Quartet is a fine tale of finding fulfillment during the golden years of life, as it marks the directorial debut of Dustin Hoffman, who jumps into the director's chair for the first time at the tender age of 74. Quartet is a strong project for Hoffman to make his debut, as it is truly an actor's virtuoso piece. With Quartet, Hoffman shows that an old dog is never too old to learn new tricks.

Based on the play by Ronald Harwood and scripted by the playwright himself, Quartet is a crowd-pleasing tale of some golden oldies. Life at Beecham is much like a geriatric commune of artistic Bohemia. Between early morning breakfast and beddy-by at sundown, the seniors at Beecham spend the day sharing their passion for the arts. Singers and musicians abound, but it's the group of opera stars that enchants Quartet with its endless sea of librettos and Arias. (This is no shaky church choir.)

When Quartet begins, the opera singers are preparing for their annual gala. Their star singer is sick, which tends to happen more frequently with old age, but the curmudgeonly old coot who chairs the opera (Michael Gambon) says 'on with the show.' The loss gives little reason for worry, though, since the opera features the members of a once-acclaimed quartet.

Rules of etiquette say ladies first, so the one female member of the quartet at the residence is Cissy (played by Pauline Collins). Cissy is a bubbly soprano suffering from Alzheimer's, but she remembers the good old days and carries the quartet's finest recording on a portable CD player, which keeps her mind sharp. The two male members of the quartet both live at the residence: Wilf (Billy Connolly) tends to his libretto and libido both, and he does his best to charm the elderly ladies whose husbands have long since expired. His dirty old man tricks land him nary a kiss, but they do land him apricot jam. (It's the little things that one learns to cherish near the end.) Reggie (Tom Courtenay), however, detests apricot jam, but he loves the opera with all his heart and is keen to inspire a future generation of fans. This is best shown by his lecture to a group of young adults to whom he likens the opera to rap music in an effort to show that the opera, too, began as the voice of the common people. As played by Courtenay's rapport with the young actors, Reggie would probably have been a great father if he'd had the chance. The regret of living dying alone pains him visibly.

Quartet takes away the opera's tone of elitism, and makes for a fun escape, much like a night enjoying the arts should be. The uppity opera is knocked from its pedestal when the fourth member of the quartet finally packs up and moves into Beecham. Jean (Maggie Smith) is the quartet's leading lady. She knows it, too, and enters the home feeling as if she's a step above the rest. Jean’s arrival causes quite a stir at the home, chiefly because the old folks enjoy the novelty of seeing a reigning diva join their ranks. Everybody dies, but few accept the fact gracefully. Cissy aptly reminds her friends about Bette Davis’s old adage and it's clear that, in spite of her airs, Jean is a bit of a sissy.

Jean’s move-in causes more excitement among the members of the quartet. Jean, as it happens, is Reggie's old flame. She hurt him badly thirty years ago. Their divorce lead to the break-up of the quartet, so Wilf and Cissy must do their best to play peacemakers. Jean wants to make amends; Reg, on the other hand, refuses to be in the same room as Jean. Some wounds just don't heal.

In spite of the drama that Jean’s appearance provides, she also proves a godsend to the opera singers. Her celebrity offers just the ticket the gala performance needs, especially if it means the quartet's first reunion performance in the decades. Jean, unfortunately, refuses, as she deems the thought of four broken old cronies trilling the scales with their weathered vocal chords a bit absurd. Jean holds on to the memory of her wonder years like a true a diva. She doesn't sing anymore; she only listens to old recordings of herself in secret.

Through Jean’s insecurity and Reggie's fear of burned love, Quartet offers a lovely and intimate tale of growing up when growing old. The film gives a fair, even-handed look at the elderly years of life. Quartet celebrates undying passions, such as love and opera. Hoffman's approach to the difficulties one faces during the aging process, like broken bones and egos, are handled respectfully and with a hearty hint of humor. Much like this year’s sleeper hit The Best Exotic Marigold Hotel, Quartet is a hilarious and poignant film that should speak to viewers of all ages.

Like Marigold, Quartet is most praiseworthy for its winning cast. There is a quartet of award-calibre performances in this ensemble. (A four-category sweep, if you will.) Maggie Smith proves herself an actress still very much in her prime as Jean. Smith is on a roll with Marigold Hotel and her work on Downton Abbey, and her feisty performance as the diva of Quartet gives her those acerbic lines that she delivers with expert dryness and timing. It also grants her some especially heartfelt moments with Tom Courtenay, who matches her every move with his subtle and dignified turn as Reggie. Likewise, Courtenay has indelible rapport with Connolly, who offers wonderful comedic relief as the old hound dog Wilf. Cusses and dirty lines spew forth from Connolly’s mouth, as will chortles from the audience. (However, it’s funniest when Maggie Smith drops an F-bomb.) Last but not least, Pauline Collins is truly endearing as Cissy. Like Connolly, Collins has a spirited comedic role; however, she also has the task of handling the slippages of Cissy’s memory. Collins knows when to play Cissy's flubs for laughs and when to play them straight, so her performance is particularly good in furthering the film’s frank portrayal of aging. All four veterans deserve several curtain calls for Quartet, as do the roster of retired opera singers who fill the minor roles.

Dustin Hoffman should take a bow for getting such strong synergy from his actors. Hoffman smartly makes Quartet a minimalist affair, for one hardly needs the added flair of the camera when the script and actors are this strong. Yet it should be noted that there is no moment when Quartet feels like a filmed play: Hoffman simply keeps this an intimate affair. A small-scale miracle of film, Quartet ranks atop the most pleasant surprises of this year’s Toronto International Film Festival. It's winning, irresistible, and without a false note. It could very well be the Best Exotic Marigold Hotel of the holiday season.


Quartet screens at The Mayfair April 19-24.