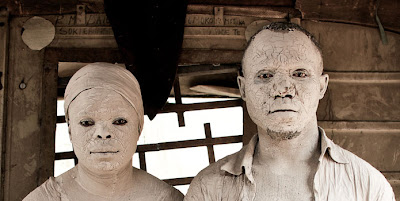 Rebelle is an underdog Canadian film that has been winning hearts since it premiered in Berlin earlier this year. It’s the affecting portrait of a Komona, a fourteen-year-old Congolese girl who has just given birth. So that her new baby can understand how it came into this world, Komona tells it the story of how she became a soldier in the rebel army.

Ripped from her home and forced to kill her parents at the age of twelve, Komona was abducted by the rebel army and put through a rigorous indoctrination process. Writer/director Kim Nguyen smartly shows the techniques of brainwashing and manipulation that transform these kids into fighters. From Jean-Claude Van Damme movies to addictive drugs (a form of ‘magic milk’ they extract from the trees), the rebels use piecemeal tools to transform the children.

Amidst the horror, though, Komona finds love with her fellow soldier, Magician (Serge Kanyinda). Komona and Magician escape the army together and try to reclaim the life they once had. Life will never be the same for Komona, however, for she is continually haunted by her past. Strange, ghost-like figures appear throughout Rebelle. They’re the ghosts of past victims of guerrilla violence that follow Komona wherever she goes. The pale figures add a tone to Greek tragedy to the film – one can see the influence of Incendies all over Rebelle – and an evocative visual equivalent for the horror that Komona struggles to express in her shy, aching voiceover.

Mwanza doesn’t speak Komona’s thoughts herself (the narration is voiced Diane Uwamahoro), but she gives a gently captivating performance as the young war witch. (She won the Silver Bear for Best Actress at Berlin.) It is impressive work from such a young untrained actor, and Mwanza’s force gives ample credit to Nguyen’s vision as a director. Nguyen handles the difficult subject matter with a steady hand. This tale of children compelled into violence is distressing, but much of the action is depicted with care. It’s visceral, but not unbearable. Through Komona’s touching and hopeful story, however, Rebelle ends on a high note. For all the bloodshed, viewers won’t feel terrible about themselves when they exit Rebelle.