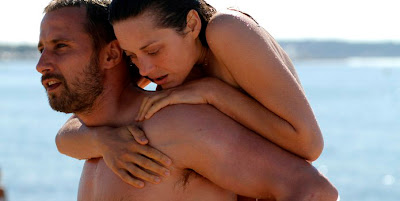 Heat. Sweat. Skin. Pain. Pleasure. Pride. Glory. Life. Death. In Rust & Bone, the drive for success meets with a loss. One person’s victory has a price for someone else. The film is the story of two fighters, Ali (Matthias Schoenaerts) and Stéphanie (Marion Cotillard), both of whom are star performers and athletes who thrive on the thrill of the game. It’s not wealth or the status they seek in their endeavours; rather, it’s the overwhelming sense of being alive that offers the greatest reward. Like all the characters in the collection of short stories by Canadian author Craig Davidson, though, Ali and Stéphanie are knocked from the podium just when they feel themselves rising to the top. Rust & Bone is a searing drama about two wounded souls picking themselves up and moving forward, and learning new ways to return to the peak of their power. It’s one of the best films of the year.

Rust & Bone find the perfect cinematic counterpart under the direction of Jacques Audiard (A Prophet). Davidson’s collection of hard-boiled Can Lit, as I described previously, reads as if the author brought a gun to a knife fight with Alice Munro. These are gritty, unflinching stories that punch hard and deep to the gut. The film hits with the same impact, if not even more so, thanks to the raw, visceral approach taken by Audiard and his two lead actors.

Rust & Bone is a very loose adaptation of Davidson’s prose – in the narrative sense, at least – but this film is an exceptionally powerful tale of two down-and-out survivors. The film mainly takes the themes of the stories, as well as the odd reference to some, such as Ali’s comment that his wife was using his son in order to smuggle drugs. The story “Rocket Ride” provides the inciting event for Stéphanie’s story. Stéphanie is a whale trainer at Marineland, who guides the orcas with confidence and agility before a crowded audience. Stéphanie excels in her performance until she is the victim of freak accident at the park. She awakens in the hospital and finds that her legs have been amputated at the knee. This loss leads Stéphanie to believe that she can no longer walk, swim, or stand before the crowd, and she slides into a deep state of hopelessness and despair.

Even though she can no longer swim with the whales, she finds her life preserver, so to speak, in Ali. Stéphanie meets Ali prior to the accident. Ali, new to the city and on the run from his previous life, is working as a bouncer at a nightclub so that he can provide for his son, Sam (Armand Verdure). (Sam’s mother is no longer in the picture.) Ali comes to Stéphanie’s aid when she visits the club one night and is the victim of an overaggressive pursuer. As Stéphanie later reveals to Ali, the thrill of being watched is her greatest turn on. She gets off by the power afforded by being the object of attention and desire. One can see why the accident at Marineland poses such a loss. Stéphanie, however, never takes the act beyond seduction, no matter what Ali perceives from her provocative dress. Ali, on the other hand, escapes through one-night stands of meaningless sex. All he needs is friction, if you’ll allow me to steal a line from another of Davidson’s stories.

Stéphanie regains her confidence and agency through her friendship with Ali. Even though Ali is a negligent father to Sam, for he always leaves the boy with his sister (played by an impressive Corinne Masiero), he nurtures Stéphanie so that she gradually begins to feel comfortable and confident in her new body. Some of this affection comes through simple companionship, while some of it comes through sex, which eventually poses some problems because the sexual appetites of the two differ so greatly.

As Stéphanie goes through a process of healing, Ali backslides. Even though he witnesses and is obviously affected by the physical scars on Stéphanie body, Ali resumes his career as a bare-knuckle kick boxer to earn some extra money. Stéphanie must therefore watch from the sidelines as this powerful man submits his body to wilful deterioration. The cyclical sense of the relationship between Stéphanie and Ali gives Rust & Bone much of its power. This is a story of grief and reconciliation, except for that the characters always seem to be robbed of their sense of release. Every reward has a cost for Stéphanie and Ali.
Newer Post Older Post Home