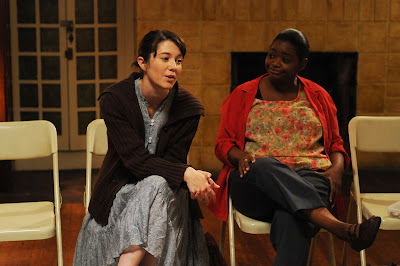 Smashed is the one film that absolutely blindsided me at this year’s Toronto International Film Festival. I'll admit that I knew nothing about the film going in. I just wanted a picture of Minny Jackson (aka Academy Award winner Octavia Spencer). Spencer is great in her supporting role, but the real reason to see Smashed is for its outstanding breakthrough performance by lead actress Mary Elizabeth Winstead as a vibrant alcoholic trying to go sober.

Winstead's Kate enjoys a booze-fueled marriage to Charlie (Aaron Paul). They spend their nights getting smashed together, and then Kate refuels before heading off to work in the morning. (Charlie is a trust fund baby and can therefore spend the dayshift nursing a hangover.) Kate loves drinking, and drinking lets Kate convince herself that her drinking is good. Much like dorm during frosh week, Kate is all liquored up 24/7. She realizes that she had a problem, though, when she goes to work hung over one day and barfs in front of a room full of students. The first graders don’t know a drunk when they see one, so they just assume that Kate is pregnant.

As the habits of most addicts go, Kate lies about her situation and pretends to be with child. Her principal (Megan Mullally) is ecstatic, as she can’t have babies herself and is happy to see her friend ready to become a mother. However, the vice-principal, Dave (Nick Offerman), spied Kate guzzling whisky from her flask before the morning bell, and he offers to help set her straight. (He’s in AA himself.)

Kate’s next slip-up is a scary one. It comes in one of those extreme cases of progressive binge drinking where a casual beer leads to another, which leads to shots, which leads to drunk driving, which leads to smoking crack with a random stranger, which leads to waking up in an industrial park on the other side of town. The scary blackout gives Kate a necessary wake-up call, as do her frequent bed-wettings and her make-believe baby. She realizes that she needs to get her shit together because Keith Richards himself might OD on her lifestyle.

Kate’s recovery is a struggle. In AA, she learns about the slow, itchy process of quitting the bottle. Dave is a strong supporter, as is Kate’s sassy sponsor Jenny (Spencer), who advises her to replace one addiction with a harmless placebo. (Baking, in Jenny’s case.) Kate makes quite a go by quitting cold turkey, but Charlie won’t give the stuff up. He loves his wild partying ways, and his lifestyle allows it. Consequently, Kate is faced with daily temptation by her main friend and ally.

Smashed might be the best onscreen depiction of alcoholism since Leaving Las Vegas. Kate’s strides and slips along the twelve-step ladder make for a harrowing journey. Smashed digs into the repulsive destructiveness that alcoholism wreaks on one’s life as friends and family are often sold out for the bottle. Writer/director James Ponsoldt creates moments of explosive drama, but he chases them with tangible shots of sobriety. Kate’s step into AA succinctly reveals the arduous process of kicking the bottle, and Smashed gives a frank, non-judgemental portrait of those who can quit and those who can’t.

The biggest smash of the film is Mary Elizabeth Winstead’s award-worthy turn as Kate. Winstead (best known for Scott Pilgrim vs. the World) gives an unflinchingly raw performance as the film’s virulent alcoholic. Like the film, though, Winstead gives a deeply sympathetic portrait of the addiction, and one that shows an understanding of the symptoms and side effects alcoholism. What makes Smashed so effective is Winstead’s ability to let Kate’s virtues slip through the slurs and swaggers that erupt during her toxic nights of getting tanked. Kate isn’t a monster; it’s simply the drinking that is.

Thanks to Winstead’s layered performance, a strong supporting cast, and Ponsoldt’s sober approach, Smashed is a compelling character study of alcoholism and recovery. It’s especially good that Smashed makes its point in a quick 85 minutes, since the film allows the audience to come up for air during their difficult journey. Smashed might be a tough film, but it’s neither depressing nor bleak. There is hope at the end of this journey and Smashed shows the power that resides in all of us if, like Kate, we’re willing to take the first step and break down our most comfortable layer.


Smashed opens in Ottawa at The Bytowne in November