TIFF Review: 'Something in the Air' 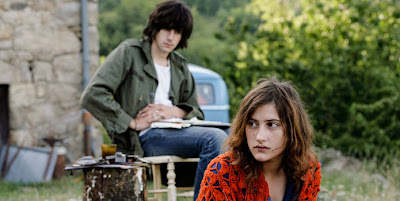 There's something in the air in the summer of 1971. It's been three years since the events of May 1968 and the French youth are itching for an uprising. The youth movement explodes in the spectacular opening sequence of Olivier Assayas's Something in the Air, which sees a student protest beat down by the excessive force of the French police. Peace signs and good vibes can't hold their own against Billy bats and tear gas, so violence begets further violence until the police go too far and beat an apolitical young bystander to a bloody pulp.

There's a hint of Do the Right Thing in Assayas’s provocative realization of a blow for blow encounter between the public and the law. Like the pointless death of Radio Rahim in the Spike Lee joint, the boy becomes a martyr for the youth movement and the students retaliate. They fight back with Molotov cocktails and graffiti, and make the city take notice of their plight.


What the students are fighting for, however, never really becomes clear. The ensemble of students -- a choral protagonist, really -- embodies that period of life where youth feel ridden with angst as if life is tearing them apart. They're rebels looking for a cause, taking up a fight that isn't really their own.

The main fighter through whom we see the battle is Gilles (Clement Metayer), a shaggy haired boy rapt in the excitement of youth. In the summer of '71, Gilles's attention is divided between getting his comrades mobilized and getting himself laid. Like most idealistic boys his age, Gilles knows little about the machinery of the world and knows even less about how to affect change through political radicalism. Gilles is one of those dream-headed teens who gets all his ideas from Proust and Truffaut. That's fine, for books and films provide a wealth of knowledge and are essential tools that shape one's identity. However, if all one knows is literature and cinema, it's best to stick with that. Gilles knows a little about the ways of love, too, but he's as inexperienced a lover as he is a revolutionary. The same goes for the group of emerging Bohemians with whom Gilles spends the summer hours, yet they're all in the process of shaping something even if it isn't radical change.

Something in the Air is supposedly the most autobiographical film to date from writer/director Olivier Assayas, the French auteur behind films such as Carlos and Summer Hours. A beautiful epic, Something in the Air has the scope of Carlos, even if it tells a far more intimate story. The film also moves at the languid pace of Summer Hours and employs Assayas's assured observational approach to the lives and legacies of his countrymen. Assayas has a remarkable ability to pull a collective struggle out of an individual experience.

With Something in the Air, Assayas shows how one can be politically active through means other than agitprop and protests. Gilles and his comrades all undergo a revolution as artists, and the best of them learn how to channel their anger into the artistic process. Instead of becoming ruffians on the street, Gilles et al start a revolution by aligning themselves with Proust, Truffaut, and others whose work nurtured their coming into being as artists. The film has a striking endnote on Assayas's entry into film, for Gilles begins as a painter, but he then goes to work on film sets and learns the tools of the trade before ultimately walking away from the derivative shit of the studios to find his own voice.

The unique voice that Assayas displays in full force in Something in the Air is what one character refers to as the 'revolutionary syntax' of the cinema. After films like Carlos, Summer Hours, and Something in the Air, Assayas has clearly mastered a niche from which to articulate the anger that began in the summer of '71. Personal, provocative, and beautifully shot, Something in the Air is a wake-up call for intelligent, radical cinema. If only it spanned the six-hour runtime of Carlos!


Something in the Air screens in Toronto at TIFF Bell Lightbox beginning May 24.
It opens in Ottawa at The ByTowne July 5.