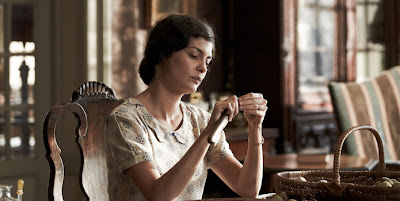 Thérèse Desqueyroux marks the final film by the late French director Claude Miller (Un secret), which arrived at the Toronto International Film Festival after serving as the closing night selection at Cannes earlier this year. Miller’s last film is a gorgeous, stately affair. Thérèse Desqueyroux, based on the novel by François Mauriac, is an elaborate character study with a tour-de-force performance from French superstar Audrey Tautou (Amélie) in the title role.

I’m not familiar with the Mauriac novel, but Miller’s Thérèse Desqueyroux is a slow, introspective tale of a provincial housewife named Thérèse Desqueyroux. Thérèse marries a wealthy(ish) landowner named Bernard with the comically unpronounceable family name of Desqueyroux, played by a fun Gilles Lellouche (Little White Lies). Bernard is a dull simple man and Thérèse leads a dull simple life with him. Cabbages and sausages abound, but Thérèse finds that her palate for provincial living soon wears thin.

Thérèse longs for the days when she and her sister could frolic in the fields as young girls. Now that she has grown into adulthood, however, Thérèse sees the artifice of her patriarchal society. It leaves a sour taste in her mouth when she sees Bernard and her other family members force their relations into suffocating little moulds.

Much like Anna Karenina, Thérèse needs an escape. Thanks to Tautou’s quietly commanding exploration of Thérèse’s inner torment, this slow, languid film burns of the psychological hell of its leading lady. Thérèse’s depressive inferno manifests itself in a raging fire, which in turn leads to a surprising duplicity and a Madame Bovary-ish desire to escape. As Little Children’s Sarah Pierce might say in her assessment of the banality of suburban living, the ill-fated Miss Bovary was motivated by a hunger for an alternative and a refusal to accept a life of unhappiness. However, where death means an escape for the other tragic heroines of the literary canon, the fate that greets Thérèse is the cruelest form of death one can imagine.

Much like the title heroine, Thérèse Desqueyroux is a cold, mild-mannered film. The slow, episodic structure with which Miller tells the story feels wholly indebted to the revolution of literary modernism. While the adaptation of this 1927 book feels rather novelistic, it is highly cinematic, too. Rather than tell the story through words, Miller evokes styles and techniques of the silent era by relying primarily on the facial expressions of his actors and by using complex compositions of light and shadow to create a sense of Thérèse Desqueyroux’s psychology. Tautou’s face is the best special effect of all, and the camera frames it in shots that express more than words could say.

Thérèse Desqueyroux opens in Ottawa at The ByTowne on March 29.