TIFF Review: 'To the Wonder' 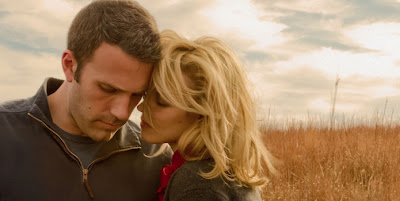 It seems that there really are two ways through film: the way of Malick fans and the way of others. To the Wonder will surely test which side you are on, for it marks Malick's most demanding--if not taxing--film to date. This difficulty says a lot about To the Wonder if one compares it to the director’s previous film The Tree of Life and Tree emerges as the more accessible of the two. That may simply be because Tree is undoubtedly the better film – for all its infuriating madness, The Tree of Life is an exceptionally rich cinematic experience. To the Wonder might come nowhere near the scope and power of Malick's previous films (it's the lesser film he's done so far), but second rate Malick is still better than most films. It might not make new converts to the Church of Malick, and anyone who disliked The Tree of Life shouldn’t touch To the Wonder with a forty-nine-and-half-foot pole.

To the Wonder contains even less of a plot than The Tree of Life did. It's a dense meditation on love and loss as told mainly through the eyes of Marina (Olga Kurylenko), who travels back and forth between Paris and suburban America during her tumultuous marriages to Neil (Ben Affleck). Somewhere in between their first and second marriage–one can hardly say where given the fleeting elliptical style of the film–Neil falls for his high school sweetheart Jane (Rachel McAdams). There is also the love story between a Hispanic priest (Javier Bardem) and his devotion to God, which is put to the test when he undergoes a crisis in faith after witnessing the poverty and misery of his parishioners. Alternatively, that's my semblance of the story at least, and one could give an entirely different account depending on how one pieces this fragmentary film together.

To the Wonder is Malick in his most abbreviated, episodic form. The film might simply be too cerebral for its own good, as even the most active of viewers could throw in the towel. To the Wonder, like Tree of Life, is also told is an endless assemblage of voiceover, twirls, and swish pans, so viewers might feel unusually dizzy piecing this one together.

In spite of the potential nausea, To the Wonder looks as beautiful as anything Malick has ever filmed. He reunites with cinematographer Emmanuel Lubezki once again, so To the Wonder is an epic visual feast. The scenes at the seaside oasis of the wonder, the proverbial trip which frames the film, is particularly gorgeous, as are the twilight scenes on Jane's ranch, which recall Malick's Days of Heaven.

The most sensuous moments of To the Wonder are more likely to evoke memories of superior experiences iin Malick's other films. While To the Wonder looks as good as the director's best work does, this view of Malickland feels flat. One could accuse Malick of making pretty wallpaper instead of a film. To the Wonder just doesn't have the same emotional pull as his others films do, and that might explain the lack of a hook that the film needs to take viewers to cinematic heaven.  For a film that relies so heavily on its actors to work silent wonders, the leads simply don't have the strength to carry the load of silent moments in which Malick demands them to tell the story with their eyes. Unlike Jessica Chastain and Brad Pitt, these actors don't have as strong a flare for raw emotion. One could fault Malick twice on this point if one considers how many strong actors were cut from the film. (Affleck has much more screentime than reported, though.)

To the Wonder might not exit TIFF with the same level of excitement with which it entered, but there is no denying that the film might still be the talk of the festival. No other film at TIFF caused quite as much debate as To the Wonder did. This film is probably best enjoyed as a conversation piece rather than as viewing experience. Malick obviously made a film that was intended to be contemplated ad nauseam. It would therefore be unfair to call To the Wonder a failure: for all its shortcomings, the film seems to have achieved its purpose.


To the Wonder opens in theatres and is available on VOD April 12.
It opens in Ottawa at The ByTowne on April 26.