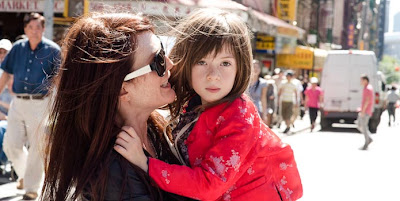 I realize that the past three TIFF reviews I have posted have all approached their films from the angle of adaptation. What Maisie Knew is another example of the journey from page to screen, so please permit me another, since adaptation is one of my greater interests when it comes to discussing films. What Maisie Knew deserves to be reviewed in light of its source material, too, since it is based on the classic novel by Henry James. It’s especially noteworthy because What Maisie Knew is a good case where the film outdoes the novel.

Maisie benefits from its contemporary New York setting, as opposed to London circa 1897. Like the James novel, What Maisie Knew paints a biting critique of a damaged society by using the story of a young girl caught between her parents in a bitter divorce. Maisie (played by newcomer Onata Aprile) is subjected to constant yelling and bickering between her parents, Susanna and Beale (played by Julianne Moore and Steve Coogan). Once the parents finally split – they’re not actually married, which is a detail that helps the story gain a greater sense of timeliness – Maisie becomes a pawn in a nasty custody battle as each parent tries to gain sole custody of the girl so that they can one-up the other party.

Susanna and Beale are both terrible parents. They have no concept of how to care for Maisie, and they are both too self-absorbed and narcissistic to give her the attention she needs. Thankfully, though, Maisie has the care of her nanny, Margo (Joanna Vanderham). Maisie, however, learns that Margo’s role might go beyond that of the nanny, as Maisie discovers that Margo has now moved into her father’s new apartment. Margo was Maisie’s greatest ally once, but she becomes part of the mudslinging pack once Susanna learns of Margo’s relationship with Beale and gets a whiff of her love for Maisie.

Not wanting to seem like the loser in the bunch, Susanna gains the lead over Beale and shows that she, too, can marry some hot young thing. Maisie’s new stepfather is Lincoln (Alexander Skarsgard) a friend/groupie in Susanna’s entourage. Susanna needs Lincoln as a babysitter as well, since she’s about to embark on another concert tour and can’t be saddled with a child during all those custody hours for which she fought.

As Susanna and Beale go off and do their own thing, Maisie gradually becomes aware of her parents’ negligence and comes to view Margo and Lincoln as the people who truly love her. Maisie is a smart young girl. She is clever and observational. She is also cute as a button, but she’s not one of those precocious/annoying buckets of angst and adorability that one sees in the movies. Maisie is an innocent child, especially as played by newcomer Onata Aprile, who gives a strong performance and carries the film quite well for an actress who was only six years old at the time of filming. Maisie is far more believable onscreen versus on paper. In the book, Maisie, like all James characters, talks in those grammatically flawless and complexly structured sentences that one sees only in the work of Henry James. It’s remarkable how well James conveys Maisie’s rise in consciousness, but the stiff craftsmanship of the novel frequently betrays its authenticity. Thanks to the retooling by screenwriters Carrol Cartwright and Nancy Doyne, and directors Scott McGehee and David Siegel, this version of What Maisie Knew feels true to life.
Newer Post Older Post Home