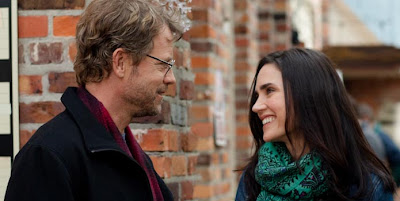 Writers is one of those quirky little indie films that suffers from first feature syndrome. It's a cute little multi-generational story about a family of writers and their joint lesson in learning that life and fiction are not the same. The film is a decent first effort by writer/director Josh Boone, for Writers is driven by characters and their love for words, and to some extent each other. Writers is a talky film and a bit too wordy for its own good. For a film about three art of the writing process, however, it just feels so... written.

The main wordsmith is Bill Borgens, played by Greg Kinnear, a has-been writer who coasts by on the accolades of his first book. Bill can't seem to write anything new, so he drafts life through his children, Sam and Rusty, played by Lily Collins and Nat Wolff, respectively. The kids seem to have a knack for fiction, but it's clear that Bill never let them play a game of choose your own adventure.

His failed marriage is much like a rough draft of his relationship with his children since he pushed away his ex-wife, Erica (played by Jennifer Connelly), because he treated her more like one of his characters than his wife. Much like Bill's life, Writers is far too constructed. Aside from a few key performances (i.e. Connelly), the lives of the Borgens play out forced and contrived. The characters aren't particularly likeable either, with Sam coming off as an especially repugnant bitch. She’s one of those haughty, self-righteous ice queens to whom everyone seems to gravitate. There's simply no one to root for in Writers, and every good novel needs an intriguing protagonist no matter how bad or banal that person may be.

A roster of unsympathetic characters works on occasion, but not when they're presented as self-consciously as they are here. Every quirk and idiosyncrasy seems tacked on. Bill advises his kids that real writing emerges in the details, but he forgets to remind them to make it feel real. The real art resides in capturing life, and Boone seems ready to take the next step. There are some moments of honesty and heart in Writers, but they are few and far between. The film too often gets caught up in its own self-awareness, from the onscreen text that introduces the characters to the on-the-nose indie soundtrack that seems more concerned with celebrating its own eclecticism than in drawing out the emotions of each scene. There's much promise in Writers and the film could find a decent life on home vid and on demand. It's nothing to write home about, but Writers could be at home with some viewers in search of light indie fare.
Rating: ★★½ (out of ★★★★★)