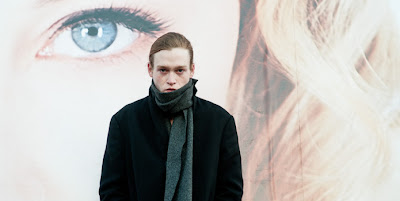 Celebrities have everything. The lifestyles of the rich and famous are as exciting and intoxicating as a tall glass of champagne. In reality, though, our cultural infatuation with the big names of the world is about as healthy as a glass of Baby Duck. Celebrity culture is dumbing society down. Concerns of body image have led to face-lifts and boob-jobs, but now the allure of instant fame—made accessible by the constant wave of flashbulbs and familiar faces on little screens—is taking brain drain to a completely new level. The disease of celebrity has spread from the body to the mind and there doesn’t seem to be a cure in sight.

Antiviral is a good example of the power of a recognizable name. The name Cronenberg is synonymous with body horror, the genre in which David Cronenberg firmly established himself as Canada’s Baron of Blood. Cronenberg’s gene for head-exploding/mind-boggling horror has been passed on to his son, Brandon, who makes his feature debut as writer and director of Antiviral. It’s impossible not to discuss the one Cronenberg without mentioning the other, since Antiviral suggests that Brandon grew up in a household of cinephilia, with the passion continuing from one generation to another. The Cronenberg name might have gotten Antiviral easily noticed, for no fan can resist seeing the new generation of Cronenberg. Cronenberg, Jr. won’t have to bank on his father’s name at all, though, since his debut is just as good as his father’s early work. Like father, like son, so Brandon’s film deserves to be seen on merit. 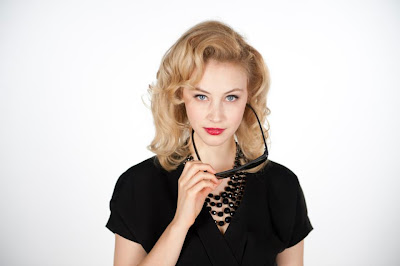 Brandon Cronenberg makes a smart debut with Antiviral. Celebrity obsession is at the core of the film and the director takes the cultural fixation with fame and beauty beyond the superficial. The mania exists in its most allegorical form in The Lucas Clinic, a unique private practice that knows that beauty is more than skin deep. The clinic’s founder, Dr. Dorian Lucas (Nicholas Campbell) runs a perverse business that feeds off fandom. Devoted followers can connect with their favourite celebrity by having a part of the A-lister injected into his or her own body. Forget bringing a photo to the salon and asking the hairdresser to make you look like Pamela Anderson: The Lucas Clinic can infect you with the Hep C she got from Tommy Lee.

Celebrity is so contagious that it infects even the doctors who work in the clinic. Syd March, for example, is hooked on celebrity, as he sneaks some prized samples from the clinic by injecting them into his bloodstream. Syd, played by Caleb Landry Jones (Byzantium), unfortunately succumbs to the pathogen and the germ morphs into a deadly disease. Brought down by fame and fortune (but more privately than the fall of Lindsay Lohan), Syd gets fatally ill when he samples a mysterious disease from the clinic’s star client, Hannah Geist (played by Sarah Gadon, a bug that has thankfully been transmitted from father to son).

Hannah has made a name selling her body in the anonymous setting of Antiviral. Syd frequently administers her top-selling maladies at The Lucas Clinic—her herpes is a popular option—and the walls of the clinic are adorned with enormous profiles of her China doll face, which is the epitome of movie star perfection. One deli in town even sells Hannah Geist steaks. Thanks to her glitz and glamour, Hannah is a one-woman meat market. 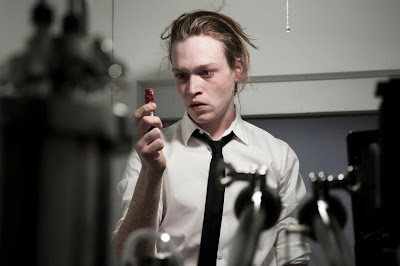 Her latest sample, however, is something that one might find at XL foods. After taste testing the malady, Syd comes down with something vicious. He has terrible hallucinations and they’re the horror kind of body-morphing that could come only from the mind of a Cronenberg.

Brandon Cronenberg makes a notable directorial debut by keeping the horror sparse and simple. The director draws good work from his cast, especially Jones (in a mostly physical performance) and Gadon, in her second Cronenberg film after this year’s Cosmopolis. Like David Cronenberg, Brandon makes a crafty play on the divide of body and mind, and he uses some strange, elaborate effects to unnerve the viewer. (No heads explode in Antiviral, but the last shot of the film is just as gloriously disgusting.) Unlike some newbies, Cronenberg reigns in the flair and uses the familiarity of genre to offer a sly take upon our mania for movie stars. By preying upon viewers’ insecurity with their bodies, he makes an unsettling, skin-crawling story. The white, aseptic world of Antiviral exploits the ever-burgeoning phobia of germs and uncleanliness that move through society little a little contagion. Dirt and sickness are the only things worse than banality, so Antiviral’s take on body-horror will have any Purell squirting moviegoer feeling creeped out.

Antiviral is currently playing in theatres across Canada.
It screens in Ottawa at the World Exchange Empire 7 and Silver City Gloucester.