But It Did Happen

How can so many people be so stupid? Compliance tells a squeamishly riveting tale about employees at a fast food restaurant that were duped by a prank caller and led to engage in all sorts of strange sordid behaviour. Compliance strains credibility just as thinly as McDonald’s stretches its ground beef, for there comes a point in the film that one simply cannot accept that a group of people could be so crazy. The pickle of it all, however, is that this tale of fast food foolishness comes sandwiched between two necessary buns of factual disclaimers. “Inspired by true events,” reads the top bun while the bottom of the half reports approximately 70 similar cases across America. Compliance is unbelievable and disgusting, but it happened.

Writer director Craig Zobel takes as his inspiration for the film a bizarre incident that happened at a McDonald’s in Kentucky in April 2004. Set in a fictional fast food joint named ChickWich, Compliance similarly looks at the warped deviant behaviour that power can bring. The reigning authority at ChickWich is a manager named Sandra (played by Ann Dowd). Sandra’s clout is undermined at the beginning of the film when Compliance opens with the dowdy middle-aged manager receiving some unnecessary finger-waving from the franchise deliveryman. One of Sandra’s employees neglected to shut the refrigerator at the end of the night shift, which resulted in a loss of nearly $1500 worth of food. Sandra smiles to the disgruntled deliveryman and says that they’ll just have to make do with less pickles and bacon than normal. Not one to miss the last word, the driver chides Sandra’s personality and leaves in a huff.

Following a spirited pep talk with her young crew, Sandra regains control of the situation and reminds her team how much they need bring their game to a busy Friday night. All goes well on the shift, with chickwiches flowing smoothly and customers seeming happy. Sandra then receives a phone call from a man identifying himself as a police officer. The caller, Officer Daniels, says that a customer claims to have been robbed while visiting Sandra’s store that night. The officer accuses one of Sandra’s cashiers, a young blonde named Becky (Dreama Walker), and describes her perfectly. He notes that he has Sandra’s regional supervisor on the other line and that they have surveillance footage of Becky’s theft, so Sandra can resolve the situation diligently and quietly by dealing with it herself. 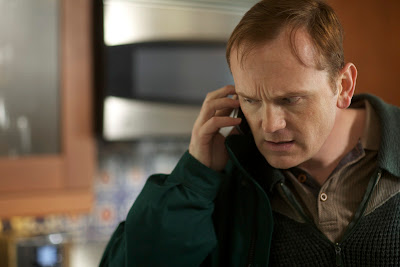 Once Sandra has Becky in a room, Officer Daniels takes her through the procedure. Sandra and Becky comply with the simple requests, since they want as little conflict as possible. Daniels’ instructions become increasingly unconventional, but the women follow their orders, since he’s a police officer and neither one wants any trouble.

The behaviour of Sandra and Becky is initially fascinating. Thrown into a perverted game of Follow the Leader, the employees at the Chickwich do what most ordinary people might do. Politeness and the fear of reprimand lead to simplified obedience.

Pared down and character-driven, Compliance relies on the psychology of its characters to move the film forward. Any viewer in the room would, presumably, like to think that he or she would have better sense than the characters do, but Sandra and Becky are similarly credible characters, which makes it all the more uncomfortable to see them self-destruct onscreen. (Perhaps the perceived thinness of the fiction simply results from the film’s closeness to life.) Especially helpful in conveying the film’s warped view of human behaviour is Dowd’s fascinating performance as the most film’s most compliant party, Sandra.

Looking much like the perky and driven managers who make the McWheels turn in the fast food business, Dowd is wholly believable as the professional worker who simply thinks she is doing her job. Awkward with the exchange of authority itself, Sandra seemed resigned to a life of service; she’s afraid to say ‘no’ because the customer is always right. By the end, Sandra is both a victim and a perpetrator of the mitigating/aggravating factors of the complicated turn of events. Much like Richard Gere does in this season’s other character-driven indie Arbitrage, Dowd’s performance takes the film beyond the mere workings of its premise. Similarly, the final shot of film leaves much to ponder, as Compliance puts the onus back on its central sheep.

There comes a point in Compliance, however, when everyone involved—Sandra, Becky, their co-workers, and even Zobel—crosses the line of acceptable behavior. Common sense goes out the drive-thru window and it’s hard to accept what surmises on screen. Compliance draws similar parallels to in this year’s excellent documentary The Imposter with how much it sucks one into the depths of human stupidity. That so many people can be so sheepish and so gullible notes a sad day for human existence. The Imposter, though, executes a masterful feat of the truth/fiction divide by presenting its strange-but-true tale in documentary form. One can emerge from The Imposter much like I did, for example, and say that one wouldn’t believe it if the film wasn’t a documentary. Archival footage and personal testimony of the participants lend the film a unique ability to straddle one’s perceptions of the truth and of the limits of depraved human behaviour. Compliance is less believable with its dramatized tale, though, for, as Mr. Scott notes in the final line in the scene from Storytelling mentioned above, “once you start writing, it all becomes fiction.”