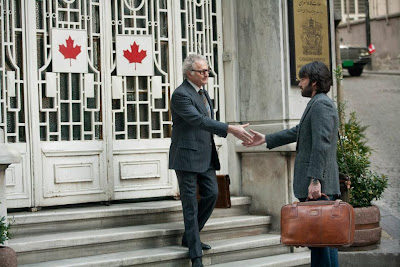 Leave it to an American to tell a story of Canadians pride. The so-called “Canadian Caper” of 1980 saw six Americans take refuge in the Canadian embassy in Tehran when the American embassy went under siege during the Iranian revolution in 1979. The six escapees were then sprung from Iran in a joint effort by the Canadian and American governments. The story was brought to the screen only once before as the 1981 made-for-TV-movie Escape from Iran: The Canadian Caper, an appropriately Canadian/American co-production starring Gordon Pinsent as Ken Taylor, the Canadian ambassador who took the Americans under his wing and got the ball rolling on their extraction. “The Canadian Caper” gets a new spin as a Hollywood production, which seems fitting as the cover story for the escape involved a film crew shooting in Iran. Argo, similarly, is a most American film about an American story, so it’s simply unfair to chide director Ben Affleck for his rendition of this piece of history that makes both nations proud. Ben Affleck’s Argo is a wildly entertaining and solidly produced piece of conventional Hollywood cinema. It’s a great political caper that connects our love for movies within a ripped-from-the-headlines story that resonates with events going on in the world today. Argo playfully explores the story about the drama made by CIA “exfiltration expert” Tony Mendez, who devised a clever smokescreen to smuggle the Americans out of Iran. Mendez (played by Affleck) proposed to enter Iran as a film producer, on location to shot a crappy sci-fi movie in the exotic streets of Tehran. The markets and snake charmers of the city seem like a stereotypical allure for this producer, supposedly a Canadian filmmaker making the kind of Z-grade schlock that defined our national cinema in the 80s. (Porky’s 2 probably wouldn’t have made it past the Iranian censors.) Likewise, the glitz and spectacle of a big film crew enables convenient confusion to get these Americans in and out of the country.

I wish that the film had more fun with the angle of Canadian film production and delved a little into the flood of Quota Quickies that were made in the 1980s, as Canadian films at the time were mostly low-grade crap or French-Canadian soft-core porn. However, the fact that Argo chooses to focus more on the extraction mission reveals that inevitable choices that Affleck and screenwriter Chris Terrio had to make whilst working these tense months of history into one two-hour film: not everything can make the final cut, and it’s better to tell one story well than to cover all the angles with a thin spreading of political correctness.

Argo’s story—about the CIA film cover—makes for great cinema. It’s a smart Wag the Dog-esque episode about Mendez’s recruitment of Hollywood make-up artist John Chambers (John Goodman), who provided prosthetics for Mendez’s other missions during gaps between Planet of the Apes movies. Also among Mendez’s team is Hollywood has-been Lester Siegel (Alan Arkin) as producer, who amplifies the project with Selznickian magnitude in order to create the perfect disguise. Goodman and Arkin provide fun, larger-than-life characters that characterize Argo with an escapist charm that makes it easy to forgive the liberties taken with the story. 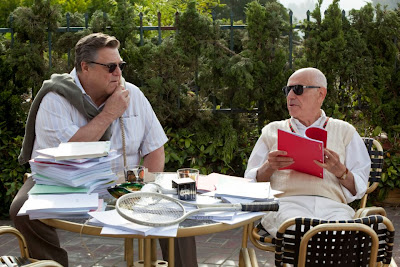 As the Hollywood moguls have fun with Mendez’s fake movie—the best worst fake movie Hollywood ever made, they say—Argo friskily highlights the craft of the moviemaking process as an art akin to espionage. “You can teach a monkey to direct,” the hotshots tell Mendez (with actor-turned-director Affleck providing a tongue-in-cheek reaction shot) but the suits at the CIA aren’t much smarter, either, as their best plan was to send the escapees home bicycles and tell them to ride like the wind out of Tehran.

Argo is arguably Affleck’s best work to date as a director. As with his previous efforts Gone Baby, Gone and The Town, Argo is taut, stylish entertainment. It’s a much tighter and sophisticated film than the other two are, though, since it never takes itself too seriously all the while chronicling a sensitive political episode.

As with any film that dramatizes real life events, however, Argo is sure to spark some criticism. In the midst of the film’s festival run in Toronto (pronounced “Toron’o”, as the American escapees are advised for their Canadian cover stories), criticism of Argo was incited by Maclean’s editor Brian D. Johnson who wrote a somewhat unfair piece of flag-waving, which says that Argo “rewrites history at Canada’s expense”. Similarly, critics, such as The Ottawa Citizen’s Jay Stone, have greeted the film with backhanded praise by saying the film glorifies America’s involvement and puts Ken Taylor in a supporting role. (Victor Garber, a Canadian, portrays Taylor in the film.)

It’s true that Taylor has a supporting role in the film, if one speaks categorically in terms of the screen time he shares. Argo, however, does not overlook Taylor’s involvement. The film shows the enormous risk that Taylor and other staffers at the Canadian embassy took in sheltering these six Americans when they needed help. One line of dialogue, for example, notes how Taylor and his wife could be tried as spies and could receive the death penalty if the Iranians discover where the Americans are hiding. Additionally, the final montage of the film notes how Taylor was—and is—considered a hero for his valiant effort. 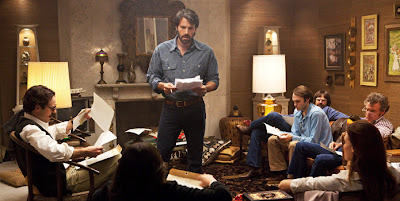 Argo might play with the facts, but, lest we forget, Argo is a movie. The opening credits note that the film is “Based on a True Story”; it never claims to tell the whole truth and nothing but the truth, although this is one case where Affleck et al might have opted for the easy safeguard of the phrase “Inspired by a True Story.” Truth is stranger than fiction, though, and Argo is so much the better as a film experience for taking the sexier route.

It might be called the Canadian Caper, but Argo tells a story that is, at its core, an American one. The six escapees are American, the Embassy hostages are American, and the CIA is American. More relevant, though, the filmmaker is American. Canadians have had the chance to celebrate the heroic efforts of the Canadian Caper, and Argo does not take away something of which Canadians should be proud. Instead, Affleck dramatizes a perspective that has been classified for the better part of its history. We have had our version of the story, and now the Americans can tell it their own way. Neither version of the Canadian Caper is mutually exclusive: one can only do so much justice to history in two hours, and Argo covers admirable terrain for a film that chronicles an exciting and substantial story, and all the while delivering great entertainment.

If Canadians feel slighted by their portrayal in the film—I personally think that Argo gave a fair portrayal of Taylor and our fellow Canadians—then perhaps they should become more vocal on for the Canadian government to invest more money in telling Canadian stories. If Denys Arcand opts to team up with the NFB and make an incendiary documentary on Taylor’s efforts, then I’ll gladly buy a ticket. I hope the naysayers do, too, but I doubt they will, given the scant number of bodies in the room with me when I pay to see a Canadian film.