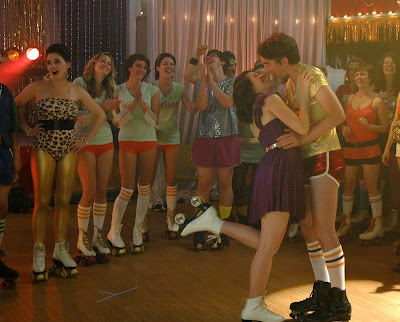 “Disco didn’t die. It was murdered.” Roller Town is pure B-movie buffoonery. Thanks to the hilarious antics of the Halifax-based comedy troupe Picnicface, made famous by their online sensation Powerthirst, Roller Town is a laugh-out-loud farce about the glory days of disco. Thanks to its charmingly comedic camp, Roller Town is the Jesus Christ Vampire Hunter of cheap Canadian roller disco movies.

The Jesus of the roller rink is Leo (Mark Little), a natural born skater who grew up in the back rooms of roller discos. Leo witnessed the death of his father at the hands of some mean goons during his childhood years. His uncle Marty, who manages the popular roller disco club Roller Town, has since raised him to be a good little roller boy.

Life at Roller Town has made Leo dream of being a star skater. He wants to join the ranks of a prestigious roller academy so that he can prove himself with eight little wheels and a pair of hot pants. The academy doesn’t seem to want a poor little orphan boy, though, but Leo gets another chance to spin and he shows that he’s the real star skater in town when the goons from his past reappear and threaten to fill Roller Town with—gasp!—quarter-guzzling video games! 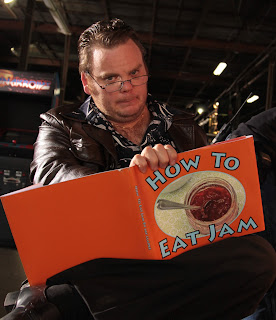 Leo proves that he has bigger disco balls than every man in town by taking on the inept thugs, plus some sweater-wearing disco haters, with his sweet moves and good vibes. He even gets the girl, Julia (Kayla Lorette), a disco debutante from the roller academy whose parents—gasp!—refuse to let her visit Roller Town lest she end up with a shame baby.

Roller Town moves briskly through its nonsensical plot in a Saturday Night Fever-ish circus of flared pants and big hair. It's seventy-six minutes of pure silliness with the ridiculous disco tracks drawing as many laughs from the crowd as do the potty humour and Family Guy-level randomness. The shameless goofiness of Roller Town works since the whole film looks like it was shot for twenty bucks, with everyone in the cast and crew having a complete riot. The crowd at the Mayfair seemed to having a wild time too, as Roller Town earned constant ripples of laughter from the audience from beginning to end. From the scene-stealing disco duck to the mindless musical numbers, Roller Town is a crowd-pleasing comedy. Hats off to the Picnicfacers: Roller Town is sure to become a Canadian cult classic.

Roller Town screened in Ottawa at The Mayfair on October 25.
It is released in Canada from D Films.