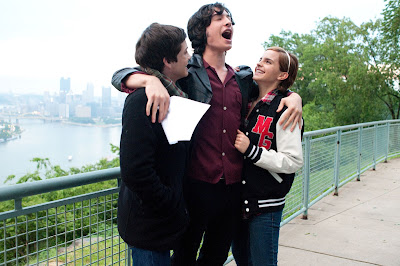 “Right now we are alive and in this moment I swear we are infinite,” says Charlie (Logan Lerman) in the final sequence of The Perks of Being a Wallflower. Charlie’s moment of bliss is inspired by a particular song that he and his friends hear on the radio while taking a freeing joyride along the highway. The mystery of the song provides a tread about the shared experiences that define us throughout our lives. (It also serves as a fine moment to situate the period for the film, as Perks shows how difficult life was for kids before Shazam.) Perks, based on the beloved best-seller, sees author Stephen Chbosky bring his own work to the screen. I haven’t read the novel, but the words with which Charlie closes the film are sure to have fans and fellow moviegoers in a state of bliss. 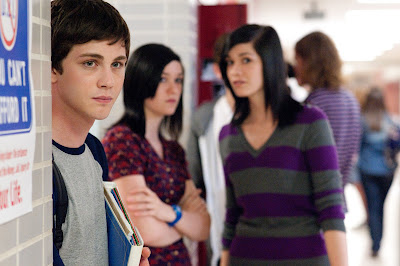 The Perks of Being a Wallflower is bound to touch a nerve with anyone who found high school to be among the less enjoyable years of his or her life. The film also celebrates the outsiders, though, so it’s bound to connect in a way similar to how people discovered a part of themselves in the book. Charlie, for example, is an introverted misfit who dreads the first day of his freshman year. Charlie’s nervousness will bring anyone who was shy to walk the halls back to their high school years. Perks takes them though a heartfelt coming-of-age story about the highs and lows of being an outsider.

High school isn’t all that bad, though, once Charlie makes the first move towards making a friend. He sees a fellow loner in Patrick (Ezra Miller), a flamboyant senior whom his classmates (and teachers) mock with the name “Nothing”. Patrick is hardly one to make someone feel worthless, though, and he reciprocates Charlie’s friendship.

Charlie forms a band a misfits with Patrick and Patrick’s stepsister, Sam (Emma Watson). With Patrick and Sam, Charlie gradually learns that the world isn’t such a scary place and he gets used to having a social life. He even discovers how to love a girl, as he inevitably falls in love with Sam during their hangouts together.

The Perks of Being a Wallflower doesn’t shy away from engaging with many of the life lessons that shape one’s identity during adolescent years. Before learning the annoying bliss of young love, Charlie first struggles with death and trauma. Plagued by memories of his deceased aunt Helen (Melanie Lynskey), who provided fond childhood memories, Charlie is plagued by recurrent nightmares and crippling self-doubts, and his constant insecurity grants an underlying roadblock to him achieving his full potential. Likewise, The Perks of Being a Wallflower extends the three-dimensionality to its supporting characters, especially Sam and Patrick.

Sam, much like Charlie’s aunt Helen, has a history of being a magnet to lousy boyfriends. Part of Charlie’s attraction to Sam is to make the repairs he couldn’t offer to Aunt Helen. Charlie helps Sam prepare for her university years by prepping her for the SATs and by appreciating her regardless of her past, much like she and Patrick do for him. Patrick, on the other hand, seems the most confident character of the group. One of the first openly gay students at the school, Patrick is a pariah amongst his peers, but he takes pride in himself and sees beyond the trivial whisperings of the school corridors. The Perks of Being a Wallflower succeeds best in its portrayal of Patrick’s relationship with both himself and others because Patrick is defined not by sexuality, but by the openness and vibrancy of his character. Patrick’s not a Degrassi-type character, either, even though he laments to Charlie that his life is an after school special, and his sexuality is simply another aspect of his personality. 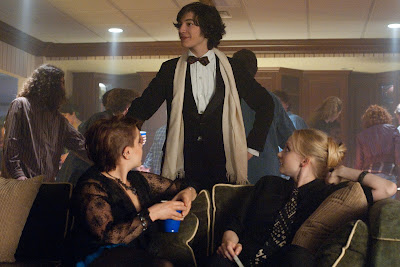 It helps, too, that Patrick is played by Ezra Miller. The actor showed audiences a surprising depth of character in the title role of last year’s We Need to Talk About Kevin. Whether Patrick is strutting his stuff in drag in a hilarious live performance of The Rocky Horror Picture Show or standing up to his closeted lover, Miller seems even more natural and self-assured as Patrick than he did as Kevin, which says a lot, since few actors can hold their own against Tilda Swinton. Miller’s work in Perks makes a good case for him being the best young actor working in the movies today. Emma Watson also shows an impressive dramatic range as Sam, as does Lerman (Writers). All three actors give strong work and provide worthy role models for any young viewers in the audience.

The Perks of Being a Wallflower might seem like it’s geared for the middle-school crowd. While it brings to the screen a novel that speaks to a younger generation of readers and stars a roster of young up-and-coming actors, it would be too dismissive to recommend the film for just the teen crowd. Perks is far more than a teen movie; rather, it’s a dramedy about teens and the troubles they have in those awkward years when they must learn quickly to become adults. Shot in a straightforward and conventional, if stylistically flat, fashion, Perks keeps its hearty tale accessible for the younger audience and discerning viewers alike. This endlessly likable story speaks to the heart and takes viewers back to a time when they were young.

There’s a feel to Perks of Being a Wallflower that’s much like the sentiment Charlie expresses at the end of the film. Perks feels infinite thanks to the timelessness and agelessness of its morale. (And to some extent its overlength.) The film is just as honest and substantial as anything John Hughes ever made, so moviegoers can enjoy a film that seems tailored to one generation, but actually speaks to many. Regardless of age, The Perks of Being a Wallflower will leave moviegoers with a high school high.

The Perks of Being a Wallflower is currently playing in Ottawa at Empire Kanata and World Exchange Empire 7.