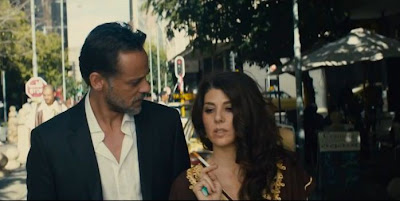 Ruba Nadda became quite popular here in Canada in 2009 with the release of Cairo Time, which played well with critics and audiences following its premiere at TIFF where it was named the best Canadian film of the festival. Nadda had been established before with films such as 2005’s Sabah to her credit, but the slow, sensual, and refreshingly mature Cairo Time was a notably distinguished romance. Nadda’s return to the Middle East in Inescapable, then, is something of a disappointment. A thriller, this new foray into genre might not have been the best follow-up to a poignant and well-rounded love story. There is nothing especially bad about Inescapable, but it never quite delivers on the strength of its potential.

Inescapable certainly begins as a fast-paced thrill ride, with Adib (played by Cairo Time’s Alexander Siddig) discovering within the first minute that his daughter, Muna, took a secret trip to Syria and has been missing for six days. As the quick development of the film explains – Inescapable might have actually benefited from a bit more exposition – Adib formerly worked as a spy in Syria. His children know nothing of his past; his immigration to Canada is a mystery to them. Muna therefore makes the stop in Syria (she was travelling in Greece) to learn more about her roots. 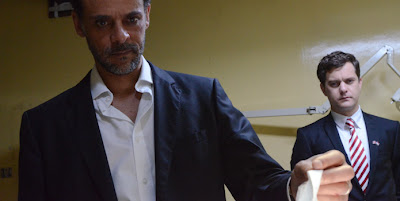 Adib, still showing his knack for espionage, works his remaining connections in Syria and gains easy access into the politically volatile country. His chief aid is Fatima (played by Marisa Tomei, who quickly dispels preconceptions about being miscast), his ally and fiancé whom he abandoned in Syria when he fled twenty years ago. Adib’s name still carries some notoriety, as he was accused of treason and sentenced to death during his exile in Canada. With Fatima’s help, though, Adib tracks down key contacts in Syria’s murky legal system.

It seems that Adib cannot escape his past since the officials he meets seem to both know and not know of his daughter’s presence in the country. Especially strange in the tangled bureaucratic quagmire is Adib’s chief Canadian liaison, a stuffy suit named Paul Ridge (Joshua Jackson). Adib’s contact with Ridge, along with his investigation with Fatima and his other past allies, asks him to confront his presence in Syria and his life back in Canada with his wife and daughters. The importance of his family is cued by a recurrent and Atom Egoyan-ish video image of Muna, which arises frequently throughout the film and forces Adib to look forward rather than back.

Inescapable is a timely portrait of the family in the era of globalization, but the film is often marred by the flat procedural development of the missing person’s case. The film moves too systematically as a thriller, for much of the drama unfolds as routine formula. The action is a bit one-note, which is disappointing since the jumpstart of the film makes Inescapable seem like it’s going to be a rollercoaster ride through the desert. 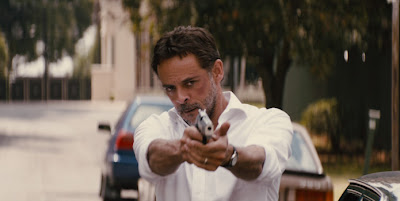 Nadda nevertheless displays a hand at intimate character work once again, for Inescapable provides an interesting play on the convention of cross-cultural discovery. Similar to how Patricia Clarkson’s Juliette gained a new outlook during her trip to the pyramids in Cairo Time, Adib’s journey reshapes his perspective on life in Canada. As Adib, Siddig seems a bit ill at ease in the role of the action hero, but he performs better in the more low-key and intimate moments, especially when paired with co-star Marisa Tomei. The old flame between Adib and Fatima provides the richest thread of Inescapable, thanks primarily to the strength of Tomei’s performance. The rapport between Adib and Fatima, who speaks in English because she mastered the language in hopes that her lover would eventually summon her to join him in Canada, is a nice romantic subplot that should please fans in search of the mature drama of Cairo Time.

It’s too bad that Nadda does not focus more on the story of Adib and Fatima, since Inescapable moves most comfortably when it centres on them. Nadda does assemble a handsome looking thriller, though, especially on a tight budget of $6 000 000, so her foray into genre isn’t much of a misstep. She seems to work best in the slower, more substantial side of filmmaking, however, and sometimes the path on which one establishes oneself is simply inescapable.

Inescapable is currently playing in Ottawa at the World Exchange Empire 7.