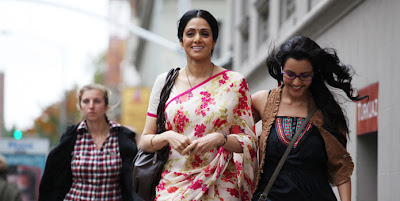 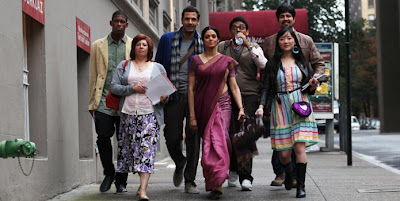 An irresistibly heartwarming piece of Bollywood bliss, English Vinglish is sure to have viewers dancing in the aisles as they exit the cinema. That the film deserves to be a mega-hit is almost a no-brainer since it marks the return of Bollywood star Sridevi, who gives the kind of comeback performance that often works itself into Hollywood folklore, but is usually only dreamed of by A-level talent.

Back to the screen after a long hiatus, Sridevi stars as Stashi, a traditional Indian wife and mother caught in the role of dutiful caregiver. Her husband (Adil Hussain) barely pays her any notice. All he thinks Stashi is good for is to stay at home to cook for him. His lack of respect puts an unfortunate stain on Stashi’s one true passion: making ladoos, a sweet, simple dessert that enchants every tooth it touches.

Stashi’s children are similarly ungrateful. They like the sweetness of their mother’s ladoos, but they know not how the little golden balls are sugary symbols of their cultural heritage. Silly and spoiled, Stashi’s son and daughter gobble up their mother’s ladoos but they grant her zero respect. The daughter is especially harsh on her mother, given how little Stashi seems to be with the language of the youth.

This new language, of course, is English. Stashi has a poor grasp of the Anglophone tongue, but this shiny new thing is sweeping across the land and exciting her family. Stashi’s family is a generation of a new India that is greatly influenced by Western culture and customs. Her kids are more likely to take a lesson from Mickey Mouse than from Mother India. Stashi, however, grew up with the belief that marriage is a duty and that familial devotion is a mother’s most important role.

Stashi’s traditional role gets a cross-cultural spin when she is thrust into the epicentre of English enchantment. When she learns that her niece is to be married, Stashi goes to visit her sister’s adopted homeland of New York. Stashi takes a juicy bite out of the Big Apple, and its flavour tickles her tongue.
Once she arrives in the global city of New York, Stashi is overwhelmed by a cacophony of new noises and sounds. All this English babble wafts through her ears, so Stashi’s sister and nieces do their best to translate things into Hindi so that their auntie can feel less lost in the hubbub of miscommunication. After one disastrous encounter with a mean-tempered, ill-mannered Anglophone, though, Stashi’s feelings of shame return. She decides to master the art of the English language before her daughter et al come for the wedding that is to be held in four upcoming weeks. 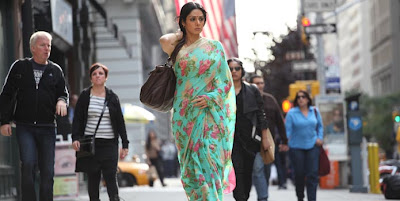 Stashi therefore enlists in a four-week intensive English class. She joins a school of other citizens who came to America in search of greater opportunity, but were bogged down by their loose grasp of Yankee dialect. If Julia Child can teach Americans to master the art of French cooking, then learning the dos and don’ts of English communication should be a breeze, right?

The fun language sessions of English Vinglish extend Stashi’s heartfelt fish-out-of-water story into a school of Babelfish in search of a common connection. The group helps one another and learns to cut cultural ties as they negotiate the verbal borders between them. Thanks in part, too, to a sweet love story between Stashi and a hunky Frenchman (Mehdi Nebbou), whose kindness and respect tempt Stashi from her familial duties, the lessons teach Stashi how to regain her self-respect. The more she perfects her grasp of English, the firmer hold she has on her sense of self. English Vinglish deserves comparison to The King’s Speech for its inspiring morale of self-confidence and self-worth.

English Vinglish is especially moving thanks to the excellent lead performance by Sridevi. Her big brown eyes are expressive vessels both for Stashi’s excitement and for Stashi’s shame. The heroine of English Vinglish is a shy, modest woman, but a wily and powerful one, too. Most of all, Sridevi makes English Vinglish fun and dynamic entertainment. The supporting cast is enjoyable as well, especially the English class ensemble and Amitabh Bachchan, who makes a hilarious cameo as Sridevi’s kind, movie-loving companion on the plane ride to America.

Viewers less familiar with Bollywood staples like Bachchan, however, might miss some of the film’s charm. Likewise, those unversed in the history of Bollywood convention might be a bit put off by the conservative turn of events in the film’s final act. On the other hand, this film by writer/director Gauri Shinde (making her feature debut) is smart and accessible through its down-to-earth story and straightforward symbolism. The tale of English Vinglish is universal, but the collective morale is peppered with signature Bollywood tunes that give it a unique flavour. Best among the lively soundtrack is the title track “English Vinglish”, which underscores the culture clash with a lively tempo and makes English Vinglish family-friendly fun.

After a successful premiere at TIFF last month, English Vinglish landed in theatres October 4 in an impressive worldwide rollout. The return of Sridevi is a noteworthy event for Bollywood fans, but after this impressive performance, the actress could be a star in North America. English Vinglish deserves to be a cross-cultural hit.