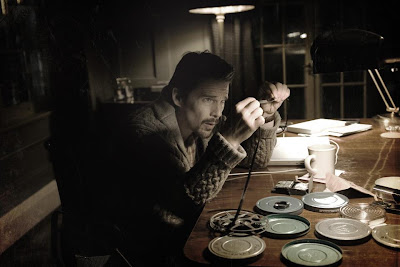 Sinister marks the second entry in the Hid Your Kids! Hide Your Wife! programme for the 2012 Ethan Hawke Film Festival. Hawke first played a tormented novelist in The Woman in the Fifth, which saw him terrorized by the turtlenecked diva played by Kristin Scott Thomas. Hawke now plays a tormented writer in Sinister, which sees him terrorized by the Boogieman and some ugly kids in bad make-up. The man has been typecast, but not for the worse since he’s in top form here.

Don’t let the above sarcasm fool you: Sinister does exciting new things with the horror genre. The chills begin in the opening frame when a reel grainy 8mm film depicts a family of four – two parents and two children – standing underneath a tree in their backyard. Their heads are covered with potato sacks and their necks are adorned with nooses. As a figure outside the frame gradually cuts through a sturdy branch, the family members are slowly strung up and they kick until they can’t kick no more. A typical family home movie this is not. 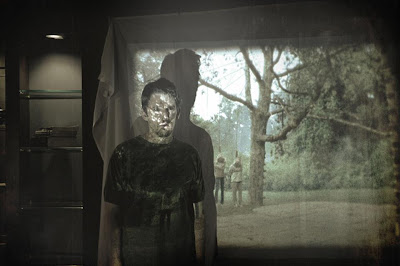 The murder of the four family members remains an unsettling mystery. Their third child, Stephanie, disappeared at the time of the murders and she has not been seen since. The case remains unsolved, which provides a juicy story for Hawke’s cardigan clad author, Ellison Osborne, a true crime novelist who moves his family into the town so he can immerse himself in the story. Ellison takes the true crime creepiness to the next level, however, by moving his family into the same house in which his subjects lived. Unbeknownst to his wife, the Osborne kids are playing under the same tree that held its previous owners like piñatas.

Ellison’s research then takes an exciting turn. He stumbles upon a carton of film reels whilst moving boxes into the attic. Thrilled at the chance to see some contextual footage of his ghosts, Ellison turns on the Super 8 projector and goes through the archive. The first reel is a bit of a doozy: it’s a family movie of a happy picnic under the sun, but it then cuts to the same footage that opens the film. Both fascinated and horrified, Ellison realizes the golden opportunity this film offers a true crime writer: first hand footage of the crime presumably shot by the killer himself. Intrigued by the offering, Ellison moves through the box and watches the home movies. One reel after another show roughly the same thing: a normal ordinary family, much like his, meets a grisly death through the lens of the Super 8 camera. There’s even a familial death at the hands of a runaway lawnmower. M. Night Shyamalan, eat your heart out.

The reels of Super 8 footage allow Sinister to make an interesting play on old staples of the horror genre. Sinister does something new by splicing the stale formula of the found footage film with the creepy convention of the killer cam. The result is surprisingly good. By taking the archival image as a point-of-view shot of the killer rather than as a shaky handheld image shot by a third party, Sinister confront the viewer’s fascination with grisly shock value and perverted violence. The result is mostly unpredictable, unlike most found footage films that signal their endpoint in their opening scene. 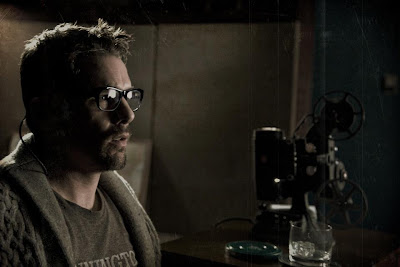 The scary bits come once Ellison makes a crucial discovery in the footage (if the gruesome murders of families/children aren’t creepy enough). Each reel contains a fleeting image of the same man – a demonic disfigured man who watches the murders from the sidelines. Someone else is clearly holding the camera, however, and performing the killings, so these murders – to the mind of a writer – hold a pattern of the occult.

Sinister has the makings for a great cold case film, but something gets muddled along the way when it adds a haunted house approach. There are almost too many angles at play in the film – one can only imagine what someone like David Fincher might have done with it – but Sinister favours the horror genre above the suspense/thriller and it will certainly satisfy fans who like things that go bump in the night. Brought to the screen by the producers of Insidious and Paranormal Activity, Sinister has a creepy atmosphere and moments of genuine terror. It’s too bad that much of the horror relies on pop-out surprises and a cheesy sound design (this is a film that includes many noises coming from the attic), although the use of the film projector as an aural cue for peril is pretty eerie.

The scariest stuff in Sinister, actually, is its play with the film image. Whereas some horror movies feature slow walking knife wielders who escape from the loony bin or arise from the lake, Sinister scares the audience with a villain that exists primarily within the mind of his victims. Mr. Boogie survives a bit like how Freddie lives in the nightmares of young folks: he resides in the image and once someone sees him, his presence is forever burned in his/her mind. This premise of Sinister will rattle moviegoers who like to scream in their seats, for Mr. Boogie sticks to you for life once one sees him. Sinister’s play with the afterimage is smart and scary since the most unsettling horror films are those that haunt the mind once the film is over. By combining the terror with the film form itself, Sinister is Halloween treat for movie buffs.