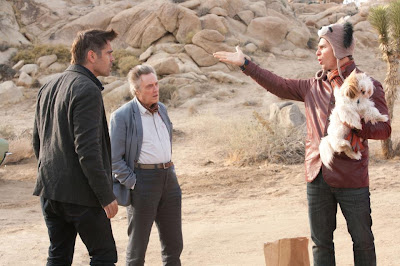 They say that the dog is man's best friend. Many a man will do crazy things for his prized pooch. He'll talk in baby voices, walk in the rain, or even shop for pink little bows. What happens, though, when the man who does such silly things also happens to be crazy? Like, really crazy? Seven Psychopaths takes one adorable pup and puts it the midst of an all-out bloodbath between a roster of crazy nuts. Seven psychopaths, actually, as the title suggests.

Seven Psychopaths also happens to be a work in progress. The movie within a movie is being written by Marty, a struggling screenwriter played by Colin Farrell (who has a lot of fun with the role). Marty isn't a psychopath, but he's a messed up alcoholic prone to foolish ideas. Marty has little going for his film, aside from a nifty title and a bottomless glass of chardonnay. He produces a decent idea for his first psychopath, a drawn-from-life serial killer that leaves a Jack of Diamonds calling card on his victims. Marty enlists help from his friend Billy (a manic Sam Rockwell) a deranged dognapper who has all the golden rules of cinematic bloodshed stored in his twisted mind, not to mention a keen penchant for psychopath psychology. Billy inadvertently writes the boys into Marty’s script when he kidnaps a Shih Tzu named Bonny. A cute little bitch, Bonny might not be this year’s Uggie, but she’s a scene-stealing mutt and a sure front-runner for this year’s Golden Collar Award. 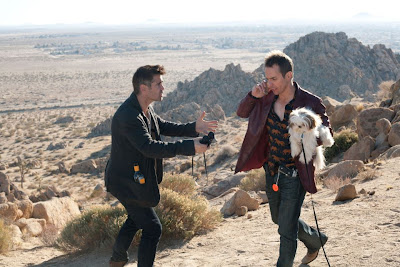 Bonny is owned by one of the seven psychopaths to grace the screen. Bonny's psychopath is Charlie (played by a hilarious Woody Harrelson), who is first introduced as a volatile, hotheaded dog lover. With his dog-walker, Sharice (Gabby Sidibe from Precious), handcuffed to a chair and answering questions on the receiving end of a shiny pistol, Charlie marks himself a true nutcase. By threatening/belittling/intimidating the blubbering Sharice, Charlie eventually learns that Bonny may be the victim of a dognapping scheme, which takes the film back to the script by Marty and Billy. (Seven Psychopaths brings all its threads together quickly.)

Charlie’s goons track the boys down when Billy holds an open casting call to invite all the crazy killers in Hollywood to sell their stories for the script. Joining the Jack of Diamonds among the septet of psychopaths is a vengeful Vietnamese monk, a vigilante Quaker and a strange bunny-toting man in black, played by Tom Waits, who is in search of his long lost wife with whom he shared a Dexter-ish life hunting serial killers. (The flashbacks of his romantic killing spree are among the film’s highlights.) 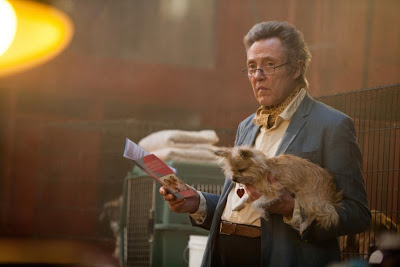 The best psychopath, though, is obviously the one played by Christopher Walken. In a spot-on bit of casting, Walken plays Rockwell's dognapping partner, a philosophizing, cravat-wearing, and peyote-tripping psychopath. Walken delivers all sorts of hilariously twisted proverbs and musings in his signature kooky dead pan. It’s his best role in about ten years and he almost steals the show from Bonny.

As the psychopaths converge in the desert for their inevitable showdown, which is riotously played out within the creative riffing for Marty's script, they unleash a furious bloodbath through the streets of Los Angeles. In an ultra-funny and ultra-violent ensemble piece, the wildly original Seven Psychopaths plays much like a hybrid crime-comedy by Quentin Tarantino, Guy Ritchie, and the Coen Brothers. Seven Psychopaths is written and directed by Martin McDonagh, the same crazy individual who made the 2008 crime-comedy hit In Bruges. Psychopaths is as hilarious as Bruges is, but it’s even more deranged. 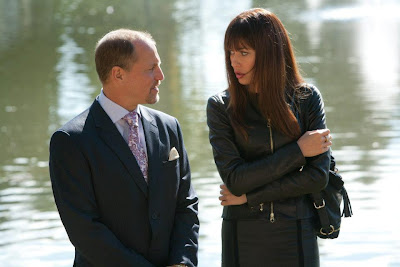 Like In Bruges, Seven Psychopaths is a man's movie. A proverbial sausage-fest of psychopaths, the film has a flagrant disregard for the female sex (and self-ironically so), as all the ladies of the film deliver a token line before they are shot, bumped off, or meet some form of foul death. Perhaps even in a wet T-shirt if viewers are lucky. The women of Seven Psychopaths are passive pieces of eye candy that are mere obstacles to the films true heroine, Bonny. Bitches.

Darkly funny and perversely violent, Seven Psychopaths takes splat-n-chuckle mayhem to the seventh degree. Bullets fly and bodies pile up in McDonagh's irreverent bloodbath, but Seven Psychopaths is no dumb action flick. It's a smart and self-aware spoof, a love letter to the Midnight Madness written, etched onto the back of a dead hooker, or something f*cked up and morbid like that. It's no wonder that a genre film as fun and as self-reflexive as Seven Psychopaths nabbed the People's Choice Award for the Midnight Madness Programme when it premiered at TIFF earlier this fall. Any film that features Christopher Walken enjoying a drug induced epiphany in the desert is worthy of a prize.