The Cult of Cinephilia 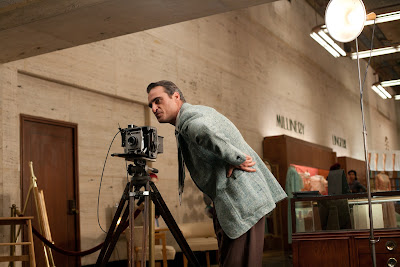 “Sometimes I look at people and I see nothing worth liking.”
-Daniel Plainview (Daniel Day-Lewis), There Will Be Blood

Paul Thomas Anderson’s The Master is a brilliantly unlikable film. Its protagonist, Freddie Quell (Joaquin Phoenix), is an angry, screwed-up, sex-crazed alcoholic. His saviour, Lancaster Dodd (Philip Seymour Hoffman), is a pompous, self-serving charlatan. The film itself is equally repugnant: it is slow, tedious, almost two-and-a-half hours long and yet, any description of the film requires a proverbial “however.” In spite of being a taxing, utterly beautiful mess, The Master is, however, a riveting and fascinating film. It’s much like the three-ring-circus going on in the states right now: one might hate the Republicans and all of their crazy shenanigans, but one cannot help but watch with amazement. 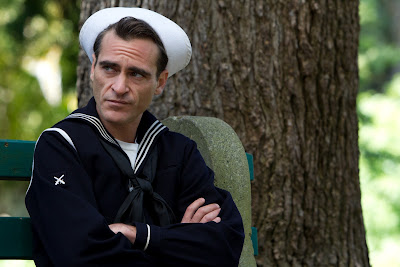 The Master finally opened in town after all the ballyhoo and fanfare of its run on the festival circuit. With its wacky preview screenings, its strange announcements of its festival premieres, and its glorified 70mm print (beautifully shot by DP Mihai Malaimare Jr), which pedestalled the film even more with the director's unorthodox act of manipulating a digital file to look like a film projection, The Master heavily announced itself as the enfant terrible of the year. The Master might be the victim of overhype and high expectations brought on by the self-consciously bizarre and erratic release of the film. If there was ever a film that confronts one’s self-perception as a film buff, The Master might therefore be it.

He struggles to manage by hitting the bottle. Freddie’s problem is so bad, actually, that his main fix is a secret cocktail of chemicals used for processing film at the department store where he works as a photographer. Like the stock on which it is shot, The Master fetishizes celluloid.

Freddie finds a new coping mechanism when he drunkenly stumbles aboard a liquor-filled party on a sailing yacht. On board, Freddie makes one of his potent potables (Jeopardy slang for cocktail) for the charismatic leader of the party, Lancaster Dodd. Freddie professes himself an able-bodied seaman during their drunken stupor and Dodd agrees to keep him on so long as he keeps the ‘liquor’ flowing. This new concoction includes turpentine and aspirin. 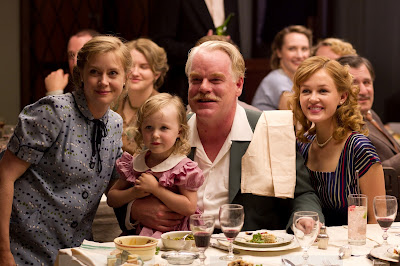 One need not worry, however, about the effect of the drink on Mr. Dodd’s head. Most folks would say that Dodd’s brain is long since fried. The man, who self-professes as The Master and requests that others call him by said name, is the leader of a school of thought called The Cause. The Cause is an organization (re: cult) that follows The Master’s teaching that one can recall past lives through thought processes and exercises. It’s much like Scientology and the loud, energetic, sermonizing Master seems a lot like the love child of Oprah Winfrey and Tom Cruise. His dramatic speeches can rally the troops like Oprah can, and like Tom Cruise, he is a bit nuts.

Also among the faithful of the cause is The Master’s wife, Peggy (Amy Adams), who has the thankless role of furthering her husband’s work as a sidekick. Peggy, visible pregnant for much of Freddie’s indoctrination throughout The Master, might be the most chilling believer among the cause since she professes her faith with the Disneyland singsong voice and friendly doe eyes of Amy Adams. She just seems so normal.

The Master changes gears once Freddie becomes the new favourite disciple of The Master. Rather than explore the ins-and-outs of the group’s workings, Anderson focuses squarely on the relationship between Freddie and his master. The film picks up in a spellbinding interview scene played out solely between Phoenix and Hoffman in which Freddie answers early questions for The Master. The Master insists that Freddie not blink his eyes or else the process starts again from the beginning. Similarly, The Master’s line of question becomes possessing.

The effect is mostly attributable to Phoenix and Hoffman. The Master marks a notable return for Phoenix since the eccentricity of I’m Still Here, even though this film is similarly debauched, and he gives a strange performance as the tormented Freddie. Talking out of the side of his mouth and walking with an awkward gait, Freddie is often a nonsensical character. He’s a mad man, but not quite as hyperbolic as Lancaster Dodd. Philip Seymour Hoffman offers a fine bit of gusto as The Master. Even though he is prone to embellishment and white-hot fury, Hoffman never takes Dodd beyond the realm of believability. If Oprah can inspire the masses, The Master surely can too.

The Master might be either Anderson’s most self-indulgent film to date or his most accomplished one. One could rightly argue either case, but the film might work best if one appreciates it as both. The Master is a cold, plodding, and seemingly pointless film upon initial viewing; however, it’s also one of the most hypnotic films of the year, thanks especially to the entrancing score by Jonny Greenwood. The Master simply burrows under the skin.

The frustrating ponderings one expends on The Master accumulate like tract marks on a junkie’s arm. The film has an addictive abstract quality, and the after effect of The Master might be greater than the initial film experience itself. While watching The Master, one senses that the Scientology angle is simply a ruse. The film dabbles in its analysis of the cult, but it doesn’t really confront it. The thick if the matter rarely goes hours beyond the Freddie and The Master himself. What, then, does Anderson seem to be trying to say with this long-winded story of repugnant individuals?

In spite of its infuriating elusiveness, The Master hooks the viewer in an undeniable way. The visuals are so arresting, the performances are so chilling, and the story is so beguiling that one cannot help but want to engage with it. Anderson undoubtedly shows his audience that film is a persuasive medium.

The Master is so painstakingly marked as film trying to assert itself as art that one almost goes to luxurious efforts trying to find value in its convoluted character study. Much like the scene in which Peggy helps brainwash Freddie, The Master evokes the exciting process of making a film be anything one wants it to be. As Peggy coaxes Freddie to change her eye colour from green to blue to black, one sees how one can manipulate a film to say anything provided that one has the proper examples and a little bit of elbow grease. 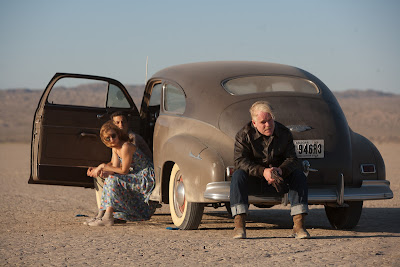 Anderson has inspired a cult of cinephilia with The Master. No film this year seems to have encouraged such a fervent profession of one’s knowledge of a cinematic oeuvre as The Master has. The internet has rarely been such a flurry of excitement with people trying to translate nothing into something. This strange review is a good example of that. Even though I caught myself looking at my watch numerous times throughout The Master, I more often caught myself trying to find references and bits of intertextuality. “Is the motorcycle scene inspired by The Misfits?” I thought as I tried to force traits of the John Huston/ Marilyn Monroe classic onto the desert sequence. “Is the scene where Freddie lays with the sand girl amongst the waves on the beach actually a perverted take on the wartime romance of From Here to Eternity?” The cinematic references are endless, but one also suspects that none of them is actually there.

The Master is a wild child delivered from one film geek to another. When approaches The Master with the pomp of its festival run, its 70mm print, and its filmified digital projection, the aura of the film might actually work to its advantage. Anderson himself seems like the new charismatic leader on the film scene. People seem willing to follow the man without question, but there are also those passionate believers, like Laura Dern’s character Helen, who seem shaken when they find themselves questioning The Cause. To dislike the film, however, is not the same as disliking the medium itself. Like Helen, some people see through the veil of empty rhetoric. Everyone else is just sheep.

The Master is currently playing in wide release.
It plays in Ottawa at Empire Kanata, World Exchange Empire 7, and Silver City Gloucester.