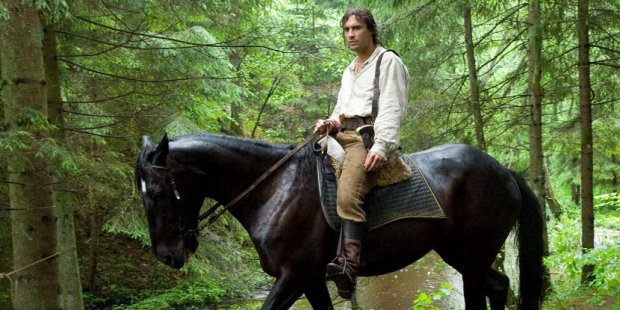 Film buffs who attended Monday night’s screening of Fireheart: The Legend of Tadas Blinda at the 2012 European Union Film Festival were treated to a rare sight. The Canadian Film Institute’s EUFF had its Lithuanian night on Monday, so moviegoers got a chance to see a film from a country that has a relatively small output here in North America. Fireheart: The Legend of Tadas Blinda is reportedly both the most expensive and most successful Lithuanian independent film ever produced, so the folks in Lithuania’s cultural sector certainly made a bid of “go broke or go home” to the audience at the CFI. Fireheart is certainly an entertaining film, and quite a pleasant surprise with its high production value. It has a good claim to be the best Lithuanian film I’ve ever seen, but it’s worth noting that it’s also the only Lithuanian film I’ve ever seen. However, I’m certainly intrigued to see future films that the country has to offer.

Fireheart is a folkloric tale of a fabled woodland hero named Tadas Binda (played by Mantas Jankavicius). A bit like Robin Hood, Tadas lives in the woods with a band of merry men. Set in the year 1861, Tadas Blinda frolics around the forest when Lithuania is still under the control of the Russian empire. During his romp one day, Tadas spies a comely maiden skipping along a rickety bridge above a swamp. She falls in, so Tadas, hero that he is, jumps in and saves her. That girl is Kristina (Agnia Ditkovskite) who also happens to be the daughter of the wealthy nobleman/landowner who presides over the surrounding area. It’s eventually against his army whom Tadas leads the local serfs in rebellion, due to some sinister forces working within the count’s order. (Fireheart also has echoes of Edward Zwick’s 2008 war drama Defiance with its tale of woodland heroes emerging from the trees to fight their oppressors.)

What ensues is a rousing adventure. Fireheart features some impressive battle scenes and spirited, crowd-pleasing action. The film might be overlong, a tad predictable, and contain a few messy subplots, but it’s an entertaining quest for sure. Fireheart is most notable for the impressive production value it brings to the EUFF, especially its striking cinematography, which features numerous sweeping shots of the beautiful Lithuanian hillsides.

The attractive scenery and folk tale charm of Fireheart might appeal to fans of adventures in Middle Earth, or other medieval actioners like The 13th Warrior or Game of Thrones. With its wide appeal and exciting production, Fireheart: The Legend of Tadas Blinda shows is another example of exciting films coming out of Eastern Europe.