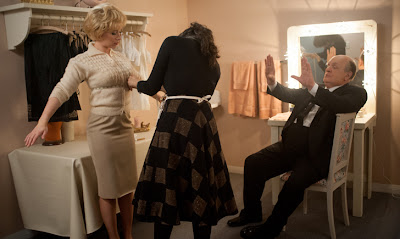 Hitchcock, thankfully, is not the Liz & Dick of great director biopics. This behind-the-scenes look at the master of suspense might not be in the league of something that Hitchcock would have made himself, although it might be a step above Waltzes from Vienna, but fans of Alfred Hitchcock will certainly enjoy the insider’s look at the making of Psycho, as well as Anthony Hopkins’ delightfully playful performance as the great director. Hitchcock, based on the book Alfred Hitchcock and the Making of Psycho by Stephen Rebello, uses this one period from Hitchcock’s career to explore all his features and foibles. It’s a love story of sorts, but unlike Liz & Dick’s one-note bastardization of a Hollywood icon, Hitchcock uses the relationship between Hitchcock and his wife Alma Reville (Helen Mirren) to explore the man’s creative process, inner demons, and unsung partner-in-crime.

The making of Psycho almost offers a rags-to-riches story for Alfred Hitchcock. Hitchcock opens as the director is coming off the success of North by Northwest, another spy thriller that was met with rave reviews along with a few quibbles that Hitch had churned out the same movie a few times before. Hitch echoes the sentiment himself, grumbling to Alma that the studios want him to make the same picture again and again. “Just give them a movie and be free,” Alma suggests when Hitch laments that he is locked into a contract with Paramount and owes them one film. Very much the woman-behind-the-man that so frequently appears in award season biopics, Alma seems to be the common sense behind the Hitchcock name. She is one half of the Hitchcock brain, at least, and the film gives Alma much credit that popular culture rarely offered her before.

It’s on his own whim, however, that Hitch chooses Psycho as his next project. The novel by Robert Bloch is currently being cut to pieces in the press for its grisly true-crime tale of a psychosexual murderer. Psycho presents something unexpected with the Hitchcock name, namely the master of suspense presenting a horror film. It seems beneath Hitchcock to tackle such sordid material, but the director is certain that critics and audiences will see the magic of the Hitchcock hand as it transforms crap into greatness. 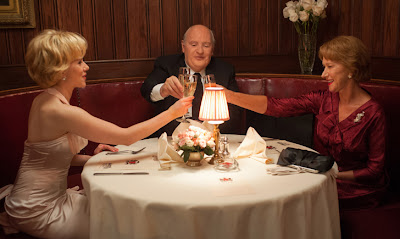 It also seems that Psycho is Hitchcock’s most personal film yet. A bit of a pervert himself—Hitchcock likes to peer through the blinds and leer at all the beauties on the Paramount lot—Hitchcock sees something in this story of a deranged voyeur that might bring his return to form. The stranger bits of Hitchcock feature the director conversing with Ed Gein (played by Michael Moriarty) the true-life counterpart of Psycho’s knife-wielding mamma’s boy, Norman Bates. In these surreal scenes, Hitchcock explores his dark side and all those strong urges he’s repressed over the years. A closeted ladies’ man, Hitchcock dreams of bedding the blondes that appear before his camera. The urges erupt thanks to the prodding of Mr. Ed Gein, with Hitchcock nearly knifing to shreds his leading lady Janet Leigh (played by a perfectly cast Scarlett Johansson) during the filming of Psycho’s pivotal “shower scene.”

Some of Hitch’s dirty doings add a nice little nuance to the film. In one scene, Hitchcock removes a covering on the wall and peers into the dressing of Vera Miles (Jessica Biel) just in time to see her unsnap her bra. The same device appears in the final cut of Psycho, as Norman Bates (James D’Arcy) enjoys a peephole to watch Marion Crane enter the shower.

Hitchcock’s dark side also adds an unflattering slant to this biopic—the necessary warts, if you will. For example, the screenplay by John J. McLaughlin (one of the writers of Black Swan) suggests that Hitchcock vindictively sandbagged Vera Miles and pulled the plug on a woman he once wanted to make a star. Miles and Hitchcock have a frosty relationship on the set of Psycho, and Hopkins’ Hitchcock harbours a sense of betrayal against Miles, as she cancelled her plans to work with the director on Vertigo because she became pregnant. The lack of affection that the portly Mr. Hitchcock receives from statuesque beauties is part of the Norman Bates complex that creates his psychology in the film.

However, Hitchcock is often equally cruel to Alma. Constantly attune to her husband’s interest in his leading ladies (such as ordering an extra pudding for Janet Leigh at dinner), Alma feels unappreciated and unattractive. Hitchcock’s lack of affection for Alma is tangibly offensive, since his wife enjoys the thankless role of devoting her life to furthering her husband’s work. Hitchcock almost gives more credit to Alma as an innovate filmmaker than to Hitchcock—it’s Alma who suggests some key casting choices for Psycho, as well as the radical idea of bumping off the A-list starlet after the first thirty minutes—but the film also looks more at Alma’s own personal inclinations than at her creativity. Much of the film centres on a tired love-triangle between Hitch, Alma, and Whitfield Cook (Danny Huston), a screenwriter who blatantly has an eye for Alma. Alma fails to reciprocate, until she tires of the role of the long-suffering wife and decides to pursue her own work and make Hitch jealous.

It’s interesting to see such an untold side of Alfred Hitchcock, but it’s also a bit unnerving to see the dirty laundry of one of the cinema’s greatest directors dragged out and hung to dry. The work that deservedly made Hitchcock such a pillar of the cinema didn’t seem to suffer as a result of his personal kinks either, so some die-hard fans of the director might not appreciate how this biopic favours the salacious side of Hitchcock over than the cinematic. It’s too bad that the film doesn’t show more of the filming of Psycho, since the behind the scenes snippets of the film are much richer—and far more unique—than the conventional story of the Svengali and the woman-behind-the-man. Much of the production of Psycho is underdeveloped in Hitchcock, such as the intriguing take on Anthony Perkins, who appears only in a scene or two, or the tension between Hitchcock and Miles, which illuminates Hitchcock’s hound-dog ego, but without deviating from the exciting scenes of cinematic history. 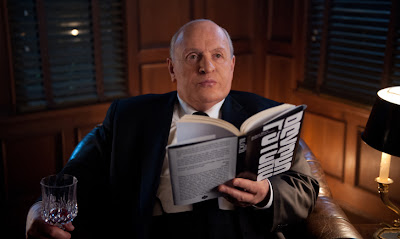 What the film does show of the filming of Psycho, however, is often quite good. Especially entertaining is the playful back-and-forth between Hitchcock and the censors as he tries to cut the shower scene as delicately yet sensationally as possible. It’s in scenes like these that best reveal the ingenuity of Hitchcock’s great mind.

The great director himself is given a worthy homage in the form of Anthony Hopkins’ lively performance. Under an impressive layer or latex and a fake nose worthy of Cloud Atlas, Hopkins is fat and jolly as Alfred Hitchcock. A mild-mannered, well-spoken portly fellow, Hopkins plays Hitchcock as a nuanced film geek man-child. Like the boys with a camera in Super 8, Hitchcock still believes in the magic of movies and his passion lives on in Hopkins’ commendable portrayal. Helen Mirren holds her own in the subtler, if slightly more limited, role of Alma, and brings a worthy blend of dignity and spark to elevate the character beyond the role of the wife. It’s a dynamic with which Alma seems to have struggled, and Reville’s stamp on the legacy of Psycho is done justice through Mirren and Hopkins’ layered take on the Hitchcock team.

Hopkins and Mirren are also much funnier than one expects for a film about a horror film. Hitchcock has an unexpectedly spot-on sense of comedic timing, which is used to a sprightly effect in the final act of the film as Hitchcock bumbles around the movie theatre during Psycho’s world premiere awaiting the audience’s reaction. The sequence is as suspenseful as the shower sequence itself. The biggest joke of Hitchcock, however, is how little faith much of Hollywood had in a film that turned out to be one of the greatest of all time. Hitchcock and Alma mortgaged their house to pay for Psycho themselves, and labored over the film together until the final cut. Unlike Liz and Dick, Hitch and Alma worked through their insecurities and perhaps used their differences to make Psycho a superior work. Liz & Dick might be a turkey, but Hitchcock certainly isn’t for the birds.

Hitchcock is currently playing in Ottawa at Empire Kanata and Empire World Exchange.