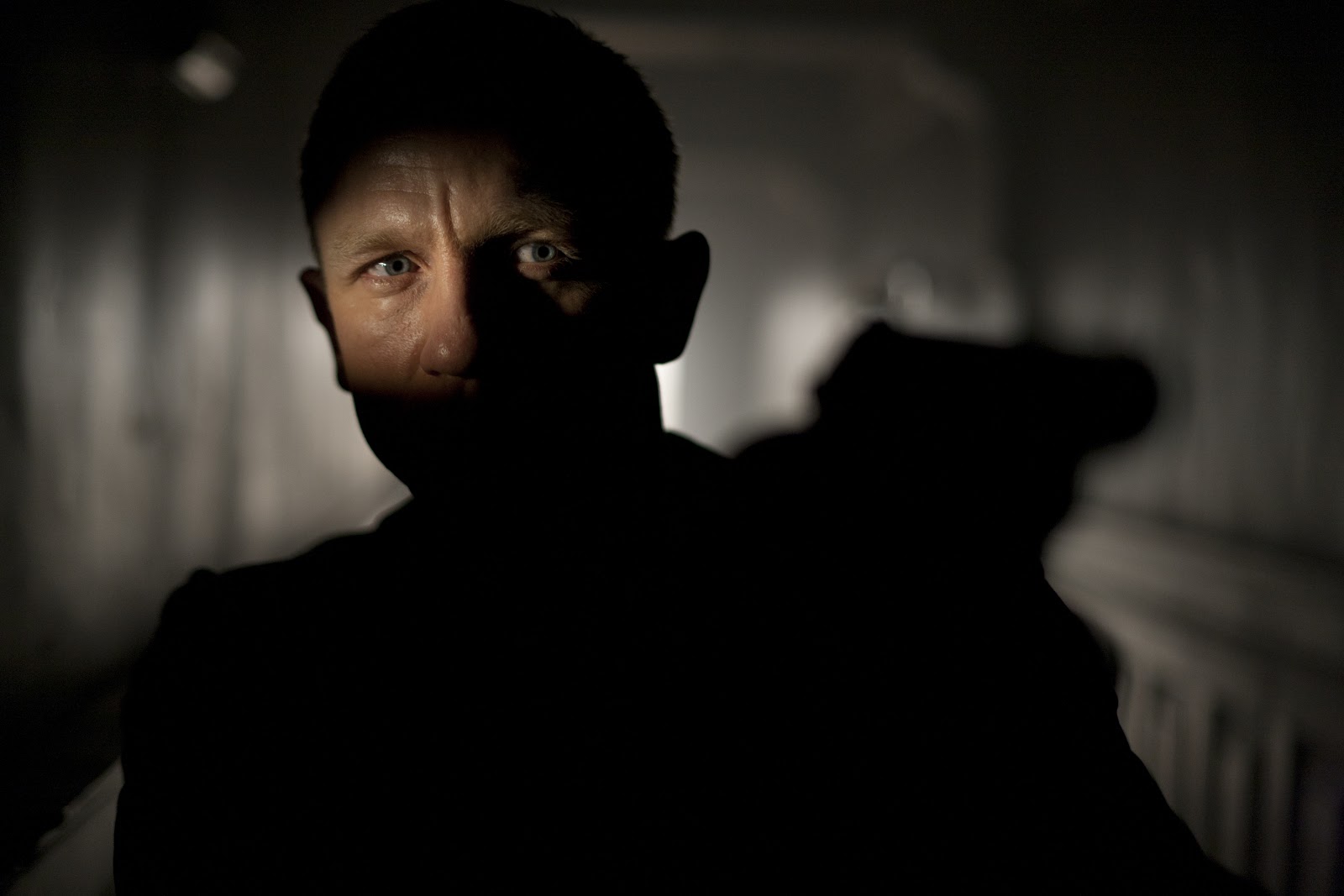 007 has returned and he puts the comic book franchise to shame. Skyfall, arguably the best major studio film I’ve seen so far this year, is a great example of how to reboot a franchise without scrapping all that’s gone before and starting from scratch (I’m looking at you, Spider-Man!). Skyfall outdoes the high bar set by 2006’s Casino Royale, a ball that was subsequently dropped by its unsightly follow-up Quantum of Solace, and brings Bond back to the bare boned hardness of the Ian Fleming novels. Taking a cue from the Dark Knight films (or perhaps the stage directions of Black Swan), Skyfall strips the Bondfranchise down to its core and makes it dark and visceral. It’s as if Skyfall achieves the goals to which the dark Timothy Dalton films aspired, but fell short of realizing. 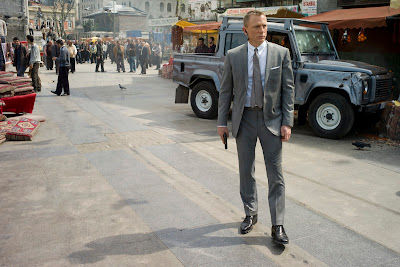 Skyfall begins by killing off the old James Bond, the silly one who went to space, fought Grace Jones, and crossed swords with Madonna. Thanks to a high-action opening sequence, Bond pulls a roster of ludicrous stunts that end with him driving a backhoe along a train, going after a baddie, and advertising a handsome new wristwatch. The sequence ends, however, with Bond taking a bullet when his fellow agent, Eve (Naomie Harris), takes a shot on M’s command and hits the wrong target. As Bond hits the water and the film fades into its signature title sequence, Bond is born again. The classically-tinged tune harkens back to the Shirley Bassey days of the franchise thanks to Adele’s sultry vocals. “Skyfall,” co-written by Adele and Paul Epworth, sets the stage for a return to form for cinema’s greatest spy. 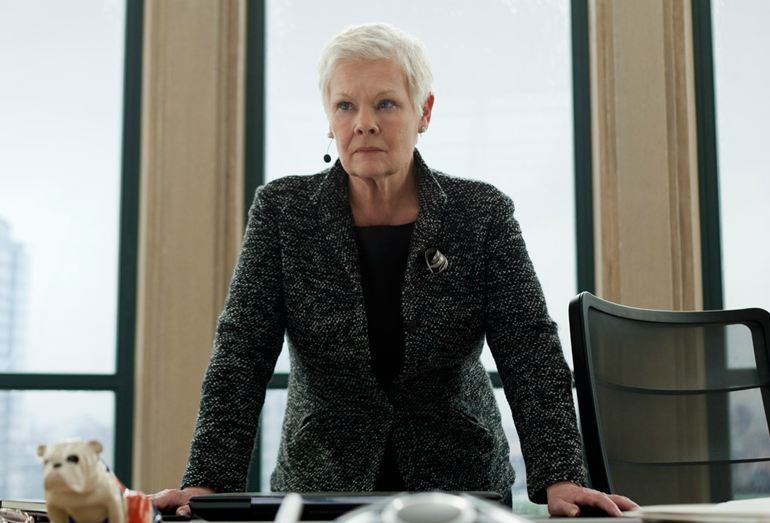 Bond comes back from the dead, however, when a serious threat is made against M’s life. M (Judi Dench) slighted 007 by showing him how much she thinks he’s expendable, but Bond’s loyalty to queen and country calls him back to service. The betrayal simply snuffs out more of the jovial silliness that remained in Daniel Craig’s Bond. It also adds more depth of character to this installment of the 007 franchise as it puts Bond’s origins story—his relationship with M—as the film’s central mission. Instead of making Bond’s assignment a blown-up affair, Skyfall scales it back and restricts the action to a small personal matter. Moreover, the more Skyfall reveals the details of the elaborate plot against M, the more the film creates a backstory that has been missing for all fifty years of Bond’s life.

It’s refreshing to see a film that does not restart completely in order to reboot a franchise, nor follow the formula of rinse and repeat. Skyfall acknowledges the legacy of its predecessors, but it intertwines a theme of new beginnings into Bond’s return so that Bond is always moving forward as he’s starting over. As both a continuation and a reboot, Skyfall’s emphasis on reigniting the franchise might seem redundant after the successful mission of Casino Royale, but it solidifies what we thought in 2006: Daniel Craig is taking the 007 back to his Sean Connery days.

Bond’s rebranding is noted sharply in the tools he uses to complete his mission. One might expect Skyfall to be the most tech-savvy 007 film since computers and gizmos have come a long way since Bond began. Bond could have live-tweeted his mission, or de-friended M from Facebook when she called a shot on him, but then Skyfall would risk treading into Roger Moore territory. Likewise, it would seem that Bond is in store for a whack of new toys since Skyfall marks the return of Q, played by a fun Ben Whishaw (Cloud Atlas), who provides a worthy follow-up to the late Desmond Llewelyn. (Apparently everyone wants to forget about John Cleese…) Instead, Skyfall emphasizes that it wants to do things the old-fashioned way. With a nod and a wink to the old tricks of the spy trade, Q provides Bond with little more than a Walther PPK and some thing called a radio. Bond even jumps into the seat on his old Aston Martin. Some things are better done the old way. 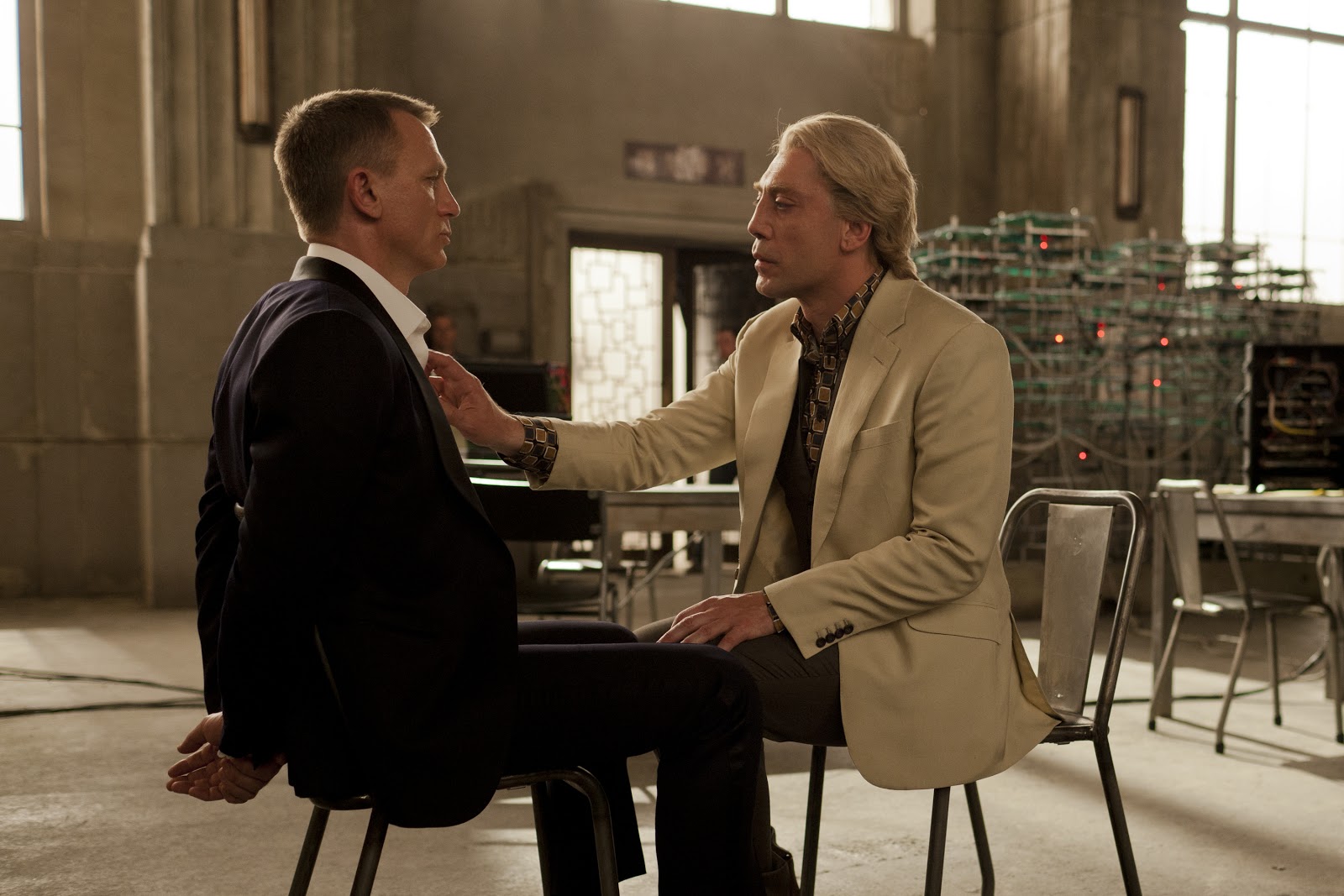 Bond also gets an old-school baddie thanks to Javier Bardem’s snaky turn as Silva, an effeminate blond rogue agent. Silva first appears in a menacing long take in which he strides slowly over to Bond while explaining his plans. Bardem has a knack for playing the scary stealthy foe thanks to his memorable turn as the cold-blooded killer Anton Chigurh in 2007’s No Country for Old Men and his villain is an equally worthy addition to the 007 series. Anton Chigurh seems like a more conventional Bond outlaw with his fateful coin toss, but Silva himself has more nuance than most Bond villains do. Instead of having Bond call the coin, Silva he ends his little speech about techno terrorism by sliding up close and giving Agent Friendo a touch of onscreen homoeroticism. Apparently it’s not Bond’s first time, though, as his adventures might not have been restricted to beauties on the beach. 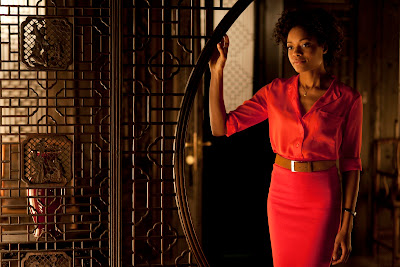 Skyfall also gives fans something new with its take on the usual “Bond girls” that come to 007’s aid. Skyfall features two memorable women in small roles: Naomie Harris as Eve, who resumes her assistance to Bond after his return, and Bérénice Marlohe as Sévérine, a woman who turned to Silva as her only escape from the sex trade. (Once again, there’s a bit more substance to the characters in Skyfall, even the minor ones.) However, Skyfall throws convention for a loop by pitting Judi Dench as Bond’s chief female ally. M is more than a desk fixture this time around. Both the target and a fighting force in the action, she’s the Bond girl herself.

Craig and Dench have excellent chemistry as Bond and M. They sell Skyfall’s old-school methodology just as quickly as Bond guzzles a vodka martini. Craig and Dench give their best performances since joining the franchise, but Craig is especially good, providing his most comfortable turn as Bond. His hardened, steely Bond trumps some of his predecessors since he gives the spy just the right bit of coldness, but keeps the charm that Sean Connery used to make the hero such a success.

Moreover, under the smart direction of Sam Mendes (American Beauty), Skyfall is the sleekest, most seamlessly assembled of the Bond films. It’s smartly paced even though it takes more time to build character than all its predecessors did combined. All the action furthers the plot as well, so Skyfall avoids the monotony of gratuitous/pointless sequences that were part of Quantum’s downfall. This 007 is more artfully composed, too, with DP Roger Deakins shooting the action against beautiful palettes of light and shadow. Forget Daniel Craig, Roger Deakins is the best 007 yet!

Just like The Dark Knight Rises takes Batman past the comic book franchise, Skyfall seems to bring Bond beyond the world of action movies and into the world of the cold-blooded espionage film. Put another way, Skyfall is more in the vein of Tinker Tailor Soldier Spy than of Austin Powers. Die-hard James Bond fans won’t be the least bit disappointed with Skyfall as it honours the roots of the franchise, but it gives Bond a flair and flavour he’s never had before. Skyfall easily ranks as one of 007’s most successful missions.