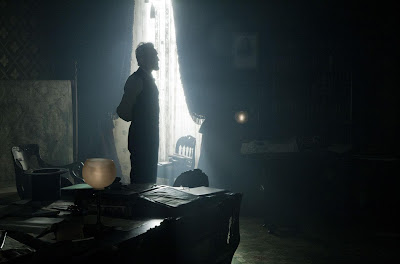 I bet Lincoln would make an incredible stage play. Star Daniel Day-Lewis gives a magnetic performance that could captivate an audience even better in close proximity. As the great storyteller Abraham Lincoln, Day-Lewis recites one speech after another. The screenplay by Tony Kusher, who wrote the Pulitzer Prize winning play Angels in America, contains an abundance of speeches. Lincoln is built not on dialogue, but on monologue. Each character of the ensemble enjoys a Shakespearean array of oration, which amounts to a great deal of talking, but also competitive acting and inadvertent theatricality. The commanding lectures of Lincoln have an inherent static drive, so the film might have been more imposing—and effective—if staged in an intimate setting instead of a sprawling, epic widescreen plain.

It’s disappointing that Lincoln doesn’t deliver more strongly since it’s directed by one of the cinema’s great eyes for large-scale art. Steven Spielberg certainly makes an admirable step up last year’s misfire War Horse, and his knack for storytelling hasn’t waned, but Lincoln doesn’t quite match the level of his dramatic works like Schindler’s List or The Color Purple. Spielberg might still be the man to tell this great American story, though, since he displays a great hand with his leading actor and he undeniably underscores the heart of Kushner’s text. 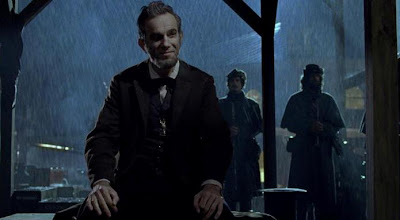 Reuniting with his Munich­-scribe Kushner, Spielberg avoids the usual “greatest hits” approach to the fall biopic and instead captures the life of Abraham Lincoln during the months following his second election win and leading up to the passage of the Thirteenth Amendment, which abolished slavery in America. Countless characters stress that Lincoln is a beloved man at this peak in his Presidency. He is a man with great power, they all say. Lincoln’s admirers and colleagues are therefore puzzled when he wants to use such influence to pass such controversial legislation. More difficult, the characters say, is how Lincoln aims to pass the bill when America is in the midst of several wars: the Civil War primarily, but also divisive partisanship, race wars, class feuds, and more.

It might seem challenging at first for viewers to follow the complicated politics of a slice of history with which they are unfamiliar. Fortunately, though, Lincoln features a steady peanut gallery of commentators (played by James Spader, John Hawkes, and Tim Blake Nelson) who summarize each member of the cast’s roster by noting their name, political affiliation, and place in history when they first appear. This trio of vote-riggers serves as a placebo for the audience, as they mostly sit in the cheap seats and observe the theatrics of the politicians as they debate the new bill.

The political circus in Lincoln is often quite funny. Intentional or not, the hammy charades of the supporting players save Lincoln from being a stiff sermon. For all the talking that goes on in the film, it’s often quite engaging.

Lincoln, however, might ultimately be too talky for its own good. Lincoln frequently invites the viewer to pull up a chair and listen to a story that illustrates his ideas. When one character throws his hands up in defeat and proclaims, “I can’t listen to another of your stories!” some viewers might agree that the films speaks in too many lengthy parables. It’s fortunate, then, that Spielberg has an actor as strong as Daniel Day-Lewis to rely upon as Lincoln delivers speech upon speech. I must tip my stovepipe hat to Daniel Day-Lewis for his immersive, yet surprisingly low-key performance as Abraham Lincoln.

However, while Daniel Day-Lewis seems like a true to life embodiment of the American president, his co-stars seem more like biopic send-ups to historical caricature. Tommy Lee Jones, for example, assumes the role of Lincoln’s fellow Republican Thaddeus Stevens, but his cartoonish and over-the-top performance more aptly nails the part of Krusty the Klown. Likewise, Sally Field plays Mary Todd Lincoln by way of Lady Macbeth. Field, like Day-Lewis, genuinely attempts to capture her real-life counterpart, but the histrionics of her performance are sure to divide audiences into two parties. The disparity in performance style between Day-Lewis and his colleagues illustrates the strangely disjointed feel of Spielberg’s Lincoln. The production seems more like a team of rivals with everyone trying to outperform one another for the best clip to show come Oscar night. 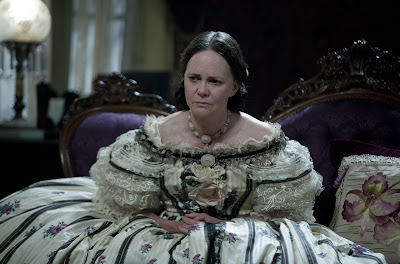 Similarly, some of Spielberg’s regular collaborators show off too much and overwhelm Lincoln with their artistic touches. Cinematographer Janusz Kaminski pulls breathtaking feats with his painterly renderings of natural light, but one often finds oneself marvelling at the specks of dust floating by the window or at the Mad Men-ish plumes of tobacco smoke that spiral across the frame. In one scene, for example, I found myself admiring how the light reveals the texture of a table, yet I paid no heed to the ongoing discussion between Lincoln and his rivals on The River Queen. Likewise, Day-Lewis portrays Lincoln as a humble, down-to-earth man, yet the gratingly exultant score by John Williams repeatedly trumpets Lincoln into the realm of hero-worshipping, with some added hillbilly twang for comic relief. The costumes by Joanna Johnston, however, are state of the art, as is the attention to detail by the team of production designers, art directors, and set decorators.

If one looks past the fireworks and bombast, however, it’s impossible to deny that Lincoln is a good film. Spielberg, Kushner, and Day-Lewis provide a compelling look at history, but they also bring out the relevancy of Lincoln’s tale. Based in part on the book Team of Rivals: The Political Genius of Abraham Lincoln by Doris Kearns Goodwin, Lincoln offers considerable reverberations with today’s American climate. The parallels to President Barack Obama are clear in the ongoing mentions of the President’s popularity and the ensuing power such popularity. The film also shows how, like Obama, Lincoln led significant progress for America by negotiating a very partisan system. Most significant are perhaps the unsaid implications of Lincoln’s endeavour, namely that the actions made by the passage of the 13th Amendment gave way to the great leader that America has today.