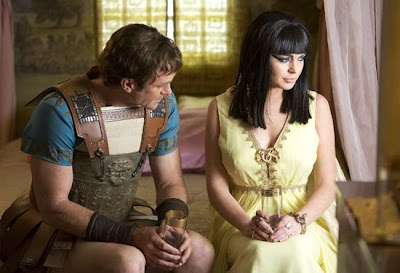 To quote Liz Taylor, “I'm bored, I'm so bored!” If Lindsay Lohan had any aspirations to make a comeback and prove herself a credible actress, then Liz & Dick was a terrible choice of project. The role of Elizabeth Taylor is a risky and challenging rule to be sure. The movie star of movie stars, Elizabeth Taylor was glitz and glamour, but she was also one hell of an actress. It’s the role of a lifetime, really, in the hands of a capable performer. (Lohan doesn't look a thing like Miss Taylor, either, but she could be a dead ringer for Sharon Stone.) It’s not that Lohan stumbles in doing justice to Taylor’s legacy—and rest assured, she does—it’s that the chance to play the great star unfortunately reveals what a terrible actress Lohan actually is.

As Lohan recreates some of Taylor’s most iconic moments, she does so without a hint of depth or drama. For example, in one scene of Who's Afraid of Virgins Woolf? featured in Liz & Dick, when Martha chastises George on his inability to afford good liquor, Lohan forgoes any of the acid-tongued heartache that infused Taylor’s performance and instead says the line as flatly and monotonously as one can imagine. It’s as she’s not even trying. It might be unfair to compare Lohan’s rendition against one of the cinema’s greatest performances of all time, but such assessments are inevitable when bringing to the screen a re-enactment of classic cinema. Kudos to Lohan for being brave enough to tackle the challenge of playing Elizabeth Taylor, but she almost seems too afraid (or limited) to get the job done.

There is simply no dramatic range to be found anywhere in Liz & Dick, even though Taylor's tumultuous life was as wide ranging as they came. This biopic is tragic, but not in the Shakespearean sense. Lohan’s flat performance is well matched by the shallow and sappy script, which says nothing of Taylor's achievements in humanitarian work nor does justice to her dramatic success, but instead focuses on diva histrionics via the love story between Taylor and Richard Burton. Grant Bowler isn’t terrible as Burton, but few actors could have improved the thin material. The film employs a bizarre mock-interview session that sees Liz and Dick gab and squabble about their affair in retrospect. Unflattering lighting and a cheesy generic score complement the poor drama, as do awkward transitions between hotel bedrooms and green screen renditions of exotic locales. Liz & Dick is so bad that the phrase 'Lifetime Movie of the Week' cannot be used as a simile to convey how low the film ranks on the biopic scale. Liz & Dick proves that the cable station’s TV flicks are indeed bad as we have ridiculed them to be, as Liz makes the pedestrian My Week with Marilyn look like a varnished masterpiece by comparison.

In fairness to Lohan, though, her turn as Liz is, in truth, her best dramatic work since 2007's I Know Who Killed Me. Lohan, moreover, is not completely miscast as Taylor since the tragic wreck of her own life echoes comically throughout Liz & Dick and greatly enhances the film experience. Liz & Dick encourages a peanut gallery of inappropriate jokes about alcoholism, celebrity scandal, public guffaws, and dramatic ineptitude. Each time Liz stumbles, film clubs should cheer and knock back a drink. If anything, Liz & Dick immortalizes Lohan in the annals of cult movie turkeys. It might even bring similarly deserved kudos if the Razzies decide to make a special exception and honor the 'berry worst’ in TV movies this year. What great star will Hollywood defile next?!