Snowy with a Chance of Zombies 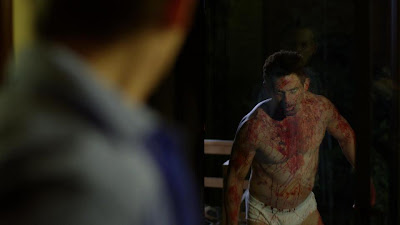 Fans of B-movie splat-n-chuckle mayhem will spill their brains over Eddie: The Sleepwalking Cannibal. A fun flick for the Midnight Madness crowd and for late-night zombies everywhere, Eddie is a silly spoof of (and addition to) the legacy of schlocky Canadian horror films. This Canadian/Danish co-pro, shot in the snowy hills of Ottawa, spills buckets of red syrup all over the winter landscape and the result is a bloody fun time.

Danish actor Thure Lindhardt (Flame & Citron) stars as a has-been artist named Lars Olaafsen who travels to the remote town of Koda, Canada. Koda is a quiet little town of ice-fishers and Tim Hortons donuts, but it explodes with a shock of violence the second that Lars rolls into town. Signalled by a run-in with an unfortunate deer, which he subsequently bashes over the head with a rock, Lars is put in Koda for the purpose of spewing red blood across the town’s little white canvas. 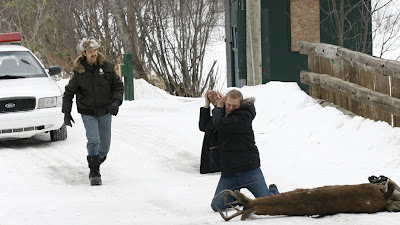 The mayhem continues when Lars is stuck in an awkward situation at school. A mentally-delayed student named Eddie (Dylan Scott Smith) loses his aunt and requires a guardian. The pickle of the matter, as the school’s principal (Alain Goulem) explains, is that Eddie’s wealthy aunt will entrust a fortune to the school so long as Eddie is looked after. Lars makes a good attempt at small-town niceties and agrees. As soon as Eddie moves in, however, Lars discovers that Eddie’s condition has some nasty side effects—namely, cannibalism.

Eddie’s midnight snacks trouble Lars at first, but they soon feed his own deranged madness. The crime scenes of Eddie’s cannibalism inspire Lars to start painting again, and his mad little spatter paintings, which we never see, become an instant success. Buoyed again by fame, not to mention the affection of his fellow teacher Lesley (played by Pontypool’s Georgina Reilly), Lars continues to cannibalize the townsfolk so that he can be stirred to produce more art. Lars’s fanaticism and his obsessive drive givs a surprising bit of braininess to this snowy gore-fest. The film makes little sense otherwise, but perhaps that’s the point.

Like the host on the radio says during the fateful drive that brings Lars to Koda, the artists in the region seem to be feeling a little uninspired. Quoting Jack London, the host advises listeners, “You can’t wait for inspiration; you have to go after it with a club.” The host bookends this blood-splattered little ditty, and by the film’s end it seems like Eddie has really heard the call of the wolf and has pummelled inspiration relentlessly. Eddie even nibbles on it a bit, as shown by the filmmakers’ fun approach to grindhouse horror.

Even though the premise of the sleepwalking cannibal stretches itself a bit thin, Eddie provides a good one-note joke that sustains itself surprisingly well for 83 minutes. Discerning viewers might dismiss Eddie: the Sleepwalking Cannibal as a disposable monster movie, but Eddie provides kitschy fun for anyone in the mood for a blood-soaked snowball fight.

Eddie: The Sleepwalking Cannibal is available to rent or own on DVD or iTunes.