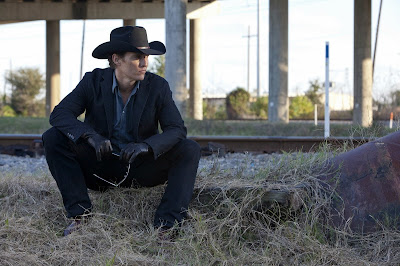 I felt like I had to go to church and atone after seeing Killer Joe. Sick, twisted, and in every sense depraved, Killer Joe is black-hearted to the bone. This ultra-violent piece of Kentucky Fried noir would make a great double-bill with Lee Daniels’ The Paperboy. Like The Paperboy, Killer Joe is a seedy, B-movie mess. Joe rejoices in all the sordid behaviour of The Paperboy, but it amps the depravity up to the NC-17. A guilty pleasure through and through, Killer Joe is a bloody god piece of southern gothic for anyone who can stomach it.

Killer Joe Cooper (Matthew McConaughey) is a Texas killing machine. A lawman, Joe is the perfect hired killer since he can get the job done and the clean up the crime scene so that the investigation, perhaps led by himself, doesn’t follow the right trail. Joe is the first choice for an assassin, then, when a Southern ruffian named Chris (Emile Hirsch) decides to have his mom whacked so that he can collect her life insurance and pay off the hired goons who aim to settle his account the hard way. There’s only one catch in the arrangement between Chris and Joe: Chris can’t afford the down payment since he needs the insurance payout first. Joe therefore proposes a non-monetary retainer: Chris’s jailbait sister Dottie (Juno Temple), who also happens to be beneficiary of her mother’s insurance plan. 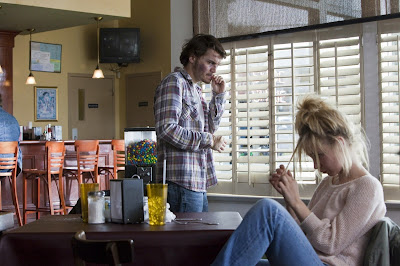 However, things go awry, as they always do in the Texas killing fields when there’s a bunch of hillbillies and gun-crazy white trash pulling the triggers. Killer Joe, however, keeps the madness right in the heart of Southern country living—the trailer park— with Chris’s family providing some mighty good trash-programming thanks to the addition of Thomas Haden Church and Gina Gershon as his father and stepmother, respectively.

The four walls of the trailer make Joe a quasi-family drama. Part noir, part horror, part ma-and-pa film, Killer Joe perverts expectations of genre and fires in all directions. The bullets always hit something, though, so while Killer Joe might be a bit of mess, it hits the bull’s-eye with its heart-pumping, skin crawling fun.

The small confines of the trailer also show Joe’s roots in the stage. Based on the 1993 play by Tracy Letts (who wrote the screenplay as well), Killer Joe marks the second adaptation of Letts’s work by the playwright and director William Friedkin. Letts and Friedkin first worked together on 2007’s eerie paranoia flick Bug, which saw Ashley Judd give a bravura performance as a twitchy junkie who envisioned herself the Insect Queen. Killer Joe might not be as psychologically riveting as Bug is, but it’s a more visceral, gut-level film experience thanks to Friedkin’s relentless hand at home-cooked violence and adult-content. 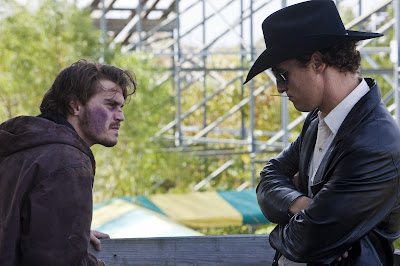 The carnage of Killer Joe culminates in an almost unbearable act of violence that sees a central character violated brutally by Joe. Fried chicken will never taste the same for many viewers, yet Friedkin pulls the scene off with his overbearing indulgence in the abhorrent action, and the actors’ bold participation is the grisly scene deserves a side of gravy. Matthew McConaughey is especially good as the hee-haw gang’s merchant of death, but all the members of the twisted family do a fine job roasting in the deep-fried deadpan of the film’s twisted humour.

Like Lee Daniels’ The Paperboy, Killer Joe is best served with a grain of salt and a taste for tongue-in-cheek humour. It simmers in pulp and offers a buffet of B-movie exploitation, so fans will likely find themselves cheering for all things warped and depraved by the time the film gets to the pumpkin pie. I’d hate to see the extra crispy cut.

Killer Joe screened in Ottawa at The Mayfair on Nov. 5th and 6th.
Killer Joe comes to home video on December 21st.