Win Tickets to 'The Impossible' in Ottawa! 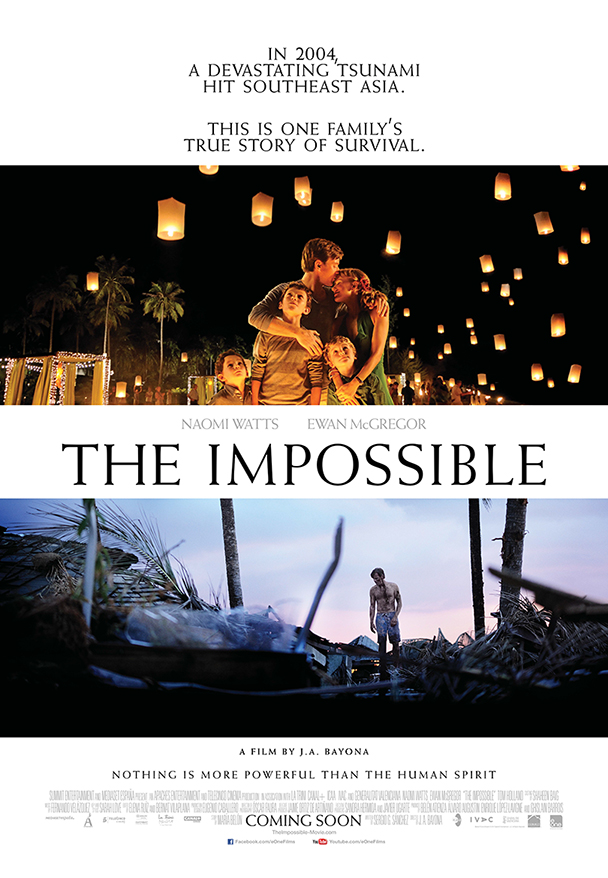 Get a head start on your holiday moviegoing by winning tickets to a sneak peek of the upcoming film The Impossible, courtesy of eOne Films! The Impossible premiered at TIFF, where it was greeted with critical acclaim and standing ovations from audiences. A powerful story based on one family’s survival of the 2004 Indian Ocean tsunami, The Impossible stars Noami Watts and Ewan McGregor and is directed by J.A. Bayona (The Orphanage).

Maria (Watts), Henry (McGregor) and their three sons begin their winter vacation in Thailand, looking forward to a few days in tropical paradise. But on the morning of December 26th, as the family relaxes around the pool after their Christmas festivities the night before, a terrifying roar rises up from the center of the earth. As Maria freezes in fear, a huge wall of black water races across the hotel grounds towards her.

Based on a true story, The Impossible is the unforgettable account of a family caught, with tens of thousands of strangers, in the mayhem of one of the worst natural catastrophes of our time. But the true-life terror is tempered by the unexpected displays of compassion, courage and simple kindness that Maria and her family encounter during the darkest hours of their lives. Both epic and intimate, devastating and uplifting, The Impossible is a journey to the core of the human heart.

Thanks to our friends at eOne Films we are giving away five (5) double passes to the Ottawa sneak peek of The Impossible on December 13th. All you have to do to enter is watch the trailer for The Impossible and then tell us the name of your favourite disaster movie. Email your answer along with your full name to contests@cinemablographer.com with the subject “The Impossible.” Bonus entries go to anyone who RTs this contest on Twitter or shares it on Facebook!
The contest closes December 12 at 9am, so I expect a wave of entries!
The Impossible opens in theatres in Toronto on December 21st and expands January 11th.