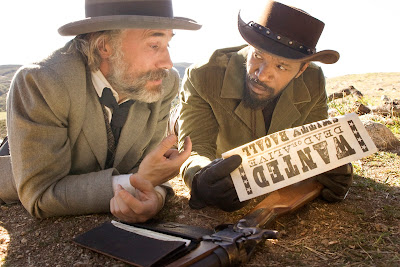 Nothing says “Happy Holidays” quite like a night of blood-splattered violence. Django Unchained, the new film by Quentin Tarantino (Pulp Fiction, Inglorious Basterds), is a fun escape from all the happy elves and candy canes of the holiday season. Django might be Tarantino’s most ultra-violent film yet, but it’s his most festive one, too, as it paints the town red with the blood of racist white folks in a bloody rampage of revenge and retribution.

Set in the South two years before the American Civil War, much like Inglorious Basterds begins with a title card that reads, “Once upon a time, in Nazi-occupied France,” Django Unchained is a film geek’s reimagining of times past. Whereas Basterds rewrote history by pumping Hitler full of lead, Django whips America’s racist past in the butt by unshackling a quiet, modest slave named Django (played by a subtle Jamie Foxx) and having him ride out into the sunset in a Blaxploitation Spaghetti Western.

Django is freed from the slave trade thanks to a bizarre deal made by an eccentric German dentist named Dr. Schultz. Schultz is played by Christoph Waltz, who makes his second collaboration with Tarantino after winning an Oscar for playing Col. Hans “The Jew Hunter” Landa in Inglorious Basterds. Schultz is every bit as gleefully deranged a character as Landa was, and Waltz is just as colourful and larger-than-life here as he was in Basterds.

Schultz, after blowing Django’s previous owners to smithereens, tells his new employee that he is actually a bounty hunter and that his next prize is a foe from Django’s past. Django agrees to help get the man, dead or alive, in return for his freedom. Django likes the taste of retribution, though, which lingers after he helps Schultz put a bullet into the man who wronged him. Payback feels good, even empowering, and Django graduates from accomplice to partner-in-crime as he helps Dr. Schultz move from town to town and claim bounty upon bounty. As the men traverse the dusty Wild West, they encounter a string of racist southern white folk who have a keen disdain for men like Django. The white people aren’t accustomed to seeing a black man ride a horse, nor are they in the habit of seeing one ride alongside a white man.

A series of episodes introduce a roster of Tarantino’s flavourful characters that trade gunfire with Django and Dr. Schultz. Among the detours of Django Unchained is a riotous interlude involving a bumbling troupe of Ku Klux Klansmen (led by Don Johnson), which lets Tarantino undermine the gun-totin’ rednecks that drove America’s long history of racism. The N-word hasn’t been spouted so frequently since Tarantino’s 1997 crime caper Jackie Brown, but Tarantino’s characters have a knack for accentuating the belittling offensiveness of the word. These are some repugnant white folks that Django and Schultz are hunting down.

The slimiest of the slave drivers, however, is the owner of the ironically named plantation Candyland. Monsieur Calvin Candie (who is not the least bit French) runs a mean business of man-to-man wrestling in which his slaves fight to the death in a bare-knuckle brawl. Candie is played by Leonardo DiCaprio, who gives a cartoonishly villainous turn and clearly has a lot of fun playing against type as the sleazy revolting baddie. In addition to the grisly blood sport, which serves as saloon entertainment, Candie owns a notorious cotton farm that houses Django’s long-lost wife, Broomhilda (played by Kerry Washington, Jamie Foxx’s onscreen wife in Ray). Django and Schultz converge on Candyland towards the midpoint of Django Unchained—the film has a bit too much exposition—and hatch a convoluted plot to procure Broomhilda from Monsieur Candie.

In spite of the slow start—Django Unchained almost feels like two different films fused together—the assault on Candyland is a magnificently tense act. The film explodes in a glorious showdown, which, in true Tarantino fashion, is a hyperbolic, if not operatic, throwback to the good old shootouts from the heyday of B-movie westerns. The climax of Django Unchained probably includes the most graphic onscreen violence that Tarantino has ever showed his audience, save perhaps for the showdown at the House of Blue Leaves in Kill Bill: Vol. 1. Like the blood-spattered Bride’s yakuza dance with the Crazy 88’s, Django’s standoff with the Candyland crackers is ultraviolent fun.

The film drags on a bit too long after the Candyland shootout, though, and the film’s running time becomes its main detractor. Django Unchained might have been an even greater film if Tarantino simply had Django and Broomhilda shoot everyone and eat the white cake before he cut to black. However, the final turn of the film brings some of its most entertaining moments (at least two shots brought applause from the audience), not to mention the strongest turn in which Django finally gets to act freely.

Some of the unevenness could be a by-product of the fact that Django is Tarantino’s first film that wasn’t cut by his long-time editor, the late Sally Menke. Fred Raskin puts the film together quite well, though, so Django is still a stylish affair even if it lacks the rhythm and pace of Menke’s work. Other tech credits are good too, especially the costumes by Sharen Davis and the production design by J. Michael Riva. Django also features the best soundtrack yet for a Tarantino film, which includes some original songs. The star of Tarantino’s film is, as always, the screenplay, and Django Unchained is another of Tarantino’s coarse and clever scripts, which is rife with an encyclopedia of film references and the often-unattainable life that seeps into a film when it’s penned by someone with such a passion for the art form.

It is, admittedly, a bit uncomfortable to watch Django Unchained without noting that Tarantino is using America’s history of slavery as bloodspot. The film does have a lot of fun subverting American mythology, though, and it gives the western genre its strongest African America gunslinger in some time. Likewise, the film delves into stereotypes with a knowing wink, which is captured best in Samuel L. Jackson’s scene-stealing turn as Candie’s now-you-see-me-now-you-don’t manservant Stephen, who is all smiles and “yes’suhs” in public, but then sipping brandy and calling the shots behind closed doors. (One can only imagine what greatness might have occurred had Tarantino adapted The Help.) Django feels a bit different than the Nazi-hunting of Inglorious Basterds, perhaps since it has a more obvious political element, but it’s all done with such a flagrant nod to cinephilia that one can’t help but cheer for the eccentricity of Django’s blood-soaked emancipation.