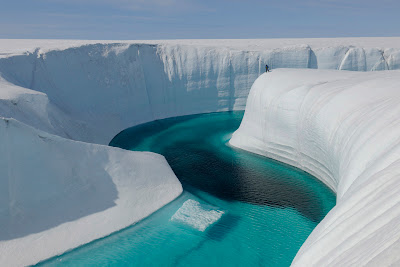 Convincing people of the reality of global warming is not a science. It’s an art. Chasing Ice makes the case for climate change in visually stunning layman’s terms through brilliant use of time-lapse photography to provide visual proof that the earth’s climate is rapidly changing. I would hate to be the politician who said, “I’ll believe it when I see it.”

Chasing Ice makes a convincing and compelling illustration on the need for the public to take a more proactive attitude towards curbing climate change. The film, which has already swayed enough viewers to scoop the Audience Award at the Hot Docs documentary film festival and enough voters to end up on the shortlist for Best Documentary at the Academy Awards, is a smart, straightforward persuasion piece. The film follows National Geographic photographer James Balog as he mounts an ambitious project called the Extreme Ice Survey to capture on camera the rapid erosion of Earth’s glaciers.

Balog explains to the camera that he pursued higher education in geology, but that he ultimately found that the science of it was not his forte. Balog instead pursued his artistic side and found that he could convey the same facts and arguments in photographs. Chasing Ice follows Balog’s philosophy and uses his captivating photographs to demonstrate how the Earth is indeed melting away because of global warming. By avoiding scientific jargon and by opting not to repeat the same statistics to which audiences have been subjected before, Chasing Ice puts aside scientific gobbledygook and allows viewers to observe for themselves the effects of global warming. 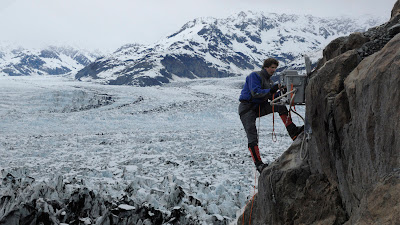 As lensed though Balog’s immaculate photography, the glaciers in Chasing Ice are a force of nature. They are natural wonders that demand preservation, if only for their beauty and history. The images of Chasing Ice return to the same frame year after year during the Extreme Ice Survey and show that the face of the earth is undergoing extreme weather patterns. It’s hard not to be swayed by Chasing Ice and feel affected by the beautiful landscapes that erode like sandcastles built too close to the waves.

At the same time that Chasing Ice builds an emotionally compelling argument through the photographic image, it offers occasional observations from several talking heads who note in common language the increasing number of ecological and economical shifts occurring because of global warming. The argument on the price effectiveness of oil, for example, seems out of balance when the ripple effects of melting ice caps are causing unusual flooding and storms that result in significant displacement of persons and billions of dollars in damage. The proof is all there, though, in the images that Balog and his team present in Chasing Ice.

The film also anticipates various counterarguments and debunks them quickly. Balog’s lectures, for example, explain to audiences how calving—the process in which chunks of glaciers fall away—is a normal occurrence that’s been happen forever; however, the film notes that it’s the rate of calving that’s the real problem, and the visual equivalent of the time lapse images underscores the effects of said rate change.

The visual evidence provides an extremely persuasive argument while offering a thrilling piece of cinema at the same time. The power of the imagery emphasizes the urgency of the line of reasoning that Chasing Ice presents in its visual essay on the consequences of climate change. Anyone who looks at these images and calls global warming a myth, quite frankly, is lying.

Chasing Ice screens in Ottawa at The ByTowne until Dec. 12th.