The Hobbit: An Unnecessary Journey


The Hobbit: An Unexpected Journey 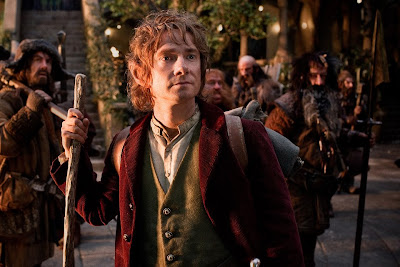 What is worse: 48 frames per second or literal fidelity? Neither one is desirable, yet Peter Jackson serves up a double-edged conundrum in his disappointing return to Middle Earth, The Hobbit. Jackson must have spent the past few years washing his hair in New Zealand, since his direction is essentially that which is offered by a bottle of shampoo: Rinse and repeat. Aside from the laborious lathering, Jackson offers two notable changes in his realization of J.R.R. Tolkien’s fantasy world: 3D special effect captured with an ultra-high frame rate and a script that follows Tolkien’s book down to the letter. Both additions are to the film’s detriment. The Hobbit ultimately betrays the first Lord of the Rings trilogy because it privileges the source text over the magic of cinema.

Lord of the Rings fans might relish revisiting the Shire and seeing Tolkien’s world recreated in painstaking detail, but The Hobbit is a redundant retread of familiar terrain. It offers a quest similar to that of bringing the fabled ring to Mount Doom, although the actually mission of The Hobbit never really seems clear. Much of the action and quaintness is the same, too, with familiar tones of Howard Shore’s score from the original trilogy slapped around the film in an odd cut-and-paste job. (The whimsical sailor tune brings back bad memories of the Oscar ceremony of 2004.) Unfortunately, though, The Hobbit fails to offer the same overwhelming awe as the original trilogy did through the visual recreation of Tolkien’s fantasy world because Jackson undercuts the efforts of his arts and crafts teams by shooting the film in a high frame rate of 48 frames per second. Conventional cinematography captures images at a rate of 24 frames per second, so there are twice as many pictures recorded in order to create a greater sense of motion.

The experiment backfires entirely because The Hobbit just looks weird in 48fps. Bilbo’s skin has never looked so porous, as if one is talking to him face to face, and the scenery looks spectacular when it’s captured in a static shot; however, any instance of motion—whether by a character or by the camera—utterly betrays the escapism of The Hobbit because it accentuates the rapid-fire rendering of the action. Bilbo moves like Sonic the Hedgehog and the camerawork has the jerky effect of a high school production. Even worse, though, is the overall aesthetic of the high-frame rate, which strips Middle Earth of a sense of artistry. The Hobbit looks cheap and artless even though it has a budget of almost twice that of The Lord of the Rings: The Fellowship of the Ring. (It has a price tag of an estimated $180 000 000 versus an estimated $90 000 000 for the first LotR film.) What is the point of going to such trouble to create an extravagant fantasy land only to remove the fine sheen that makes it look so sumptuous?

The first Lord of the Rings trilogy delivered three visually stunning films. Jackson and his team took special effects to a new level by combining astonishing visual work with top-notch production design and atmospheric cinematography. The booming success of the trilogy could largely be attributed to the team’s laudable success in taking the fantasy genre and turning it into art. There is a sense of enchantment to the early films, if not a glowing lustre to the heavenly folklore of the fable. The Hobbit, though, lacks the fantastical ether of the Lord of the Rings films since it emphasizes its reality through the high frame rate. It results in a comically detached effect as opposed to the thrill of escape. It’s like watching a bizarre Brechtian mash up of Tolkien and Coronation Street.

Jackson is by no means bound to remake his first trilogy with the Hobbit trilogy, but since so much else in the film follows its predecessors, it’s strange that the result is much a misfire. One might want to see the high frame rate out of interest—die-hard film geeks probably should—if only to end up on the ‘nay’ side of the debate. The mode of twenty-four frames per second has served the cinema well for decades: it isn’t broken, so why fix it?

The philosophy of “If it ain’t broke, don’t fix it” extends to the film’s true detriment: the script’s needless fidelity to Tolkien’s text. Regardless of the frame-rate in which viewers choose to see the film, they will probably feel taxed by the overstuffed and tedious narrative. The Hobbit: An Unexpected Journey offers only the first part of Tolkien’s book. The Hobbit has been split into three parts, presumably for the reason of cashing in on audience returns. The choice to make a trilogy can surely not be for the sake of enhancing the story, since one could easily enter The Hobbit’s journey in Part Two without missing any essential details.

An Unexpected Journey is essentially three hours of exposition. Aside from a few details about the ring and Gollum, which were covered in the first trilogy, this film offers nothing that is required viewing. It includes two musical sequences and an endless string of action sequences that should have been left on the cutting room floor. The film amounts to a string of team-building exercises for Bilbo and his troupe of dwarves, but it never connects narratively or emotionally. Whereas the films of the first trilogy ended with a sense of closure as well as a sense of continuity, The Hobbit: An Unexpected Journey offers nothing but an unnecessary prologue.

There is no good reason for The Hobbit to be as overdrawn as it is. If one compares it to, say, the Joe Wright/Tom Stoppard adaptation of Tolstoy’s Anna Karenina, one sees that filmmakers need not be so reverential to a text in order to do it justice. Anna, an 800-odd page behemoth, loses about three quarters of its prose in the unexpected journey from page to screen. Plot lines disappear, characters vanish, and chronology shifts, but the themes and lessons of Anna Karenina survive unscathed.There is no necessity for Joe Wright to make Anna Karenina 2 since all was said in one film. The Hobbit, on the other hand, seems to contain every character, detail, thread, and scene of the novel, yet it essentially says nothing. There is no morale, no lesson, or no point to An Unexpected Journey. Moreover, Anna refashions 800 pages of literature into a 129-minute film whereas The Hobbit transcribes 300 pages of literature into three feature length films, one of which is almost three hours long and the other two, given the director's oeuvre, are presumably are of similar length. If Peter Jackson had adapted Anna Karenina, it would have been split into four exhausting installments, one of which would have likely featured nothing but Levin shearing wheat for three hours.

The mind-numbing fidelity to the source text is The Hobbit’s fatal flaw. Seeing it in 48fps might add an extra distraction, but the film feels so redundant that one cannot recommend seeing it for all the impressive visuals and performances it contains. By spreading the story into three thin slices, Jackson does Tolkien a disservice because many viewers could likely be too exhausted by the end of Part One to feel bothered to continue with The Hobbit’s journey. I, for one, will not.


The Hobbit: An Unexpected Journey is now playing in wide release.