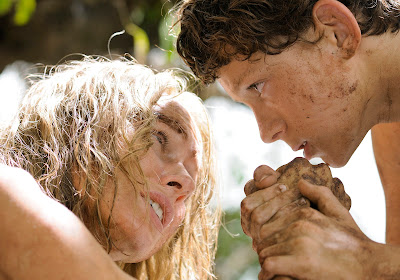 On December 26th, 2004, a colossal tsunami ripped through the Indian Ocean and devastated South East Asia. Over 300 000 people died, thousands more were declared missing, and an innumerable amount of people were affected by this natural disaster. The Impossible is the true story of one family that happened to be vacationing in Thailand for Christmas 2004. Their life-changing journey is a moving tale of hope, courage, and survival. We already know the outcome of their narrative before the film even begins, yet The Impossible is a gripping, suspenseful, and ultimately uplifting experience.

Christmas vacation begins like a typical family holiday for Maria, Henry, and their three sons. En route to Thailand, their eldest son, Lucas (Tom Holland) is being a bit stubborn. Like most boys his age (eleven-ish), Lucas just wants to be left alone and no longer wants to be coddled by his mother (Naomi Watts). When the family arrives at their beautiful resort in Thailand though, all the tension of the plane ride melts away in the sand and sun. All goes well, except for the ironic mix-up about the family’s room: They booked a suite on the third floor, but got the ground level instead. 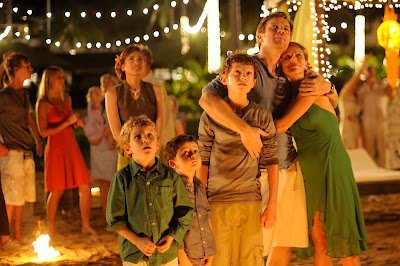 A few feet above water might not have made a significant difference, however, since virtually everyone in the resort seems to be lounging at the pool on the fateful sunny afternoon of December 26. Henry (Ewan McGregor) is tossing a ball in the water the boys while Maria catches some sun and reads a book. The giant wave arrives out of nowhere and is signalled only by an eerie rumbling silence interrupted by a swarm of fleeing birds.

The tsunami approaches the resort with rapid speed. Like the awesome opening sequence of Clint Eastwood’s Hereafter, a large wall of water gushes at Maria and her family in an almighty rampage. Director J.A. Bayona, however, cuts away from the money shot and escapes the spectacle just as soon as Maria blacks out.

Maria awakens in a spectacularly staged sequence in which she reconnects with Lucas within the rushing waters brought in by the flood. The riveting scene boasts some impressive visual work and choreography—it’s the kind of lifelike disaster that made James Cameron’s Titanic such a thrilling experience—and it provides an effective segue into the aftermath of the tsunami. 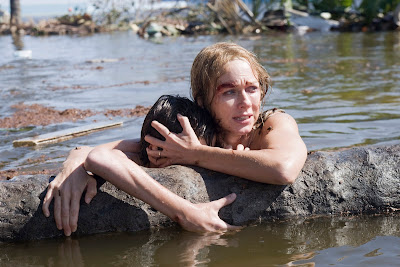 The Impossible opts for emotional realism rather than a special effects extravaganza: the thrill of the film comes not from seeing the family struggle to survive the storm, but from trying to reconnect in the wreckage. Bayona, who directed the chilling 2007 ghost story The Orphanage, shows that there is nothing more horrifying than a family torn apart. As Maria and Lucas cling to life together, they know nothing of the whereabouts or status of Henry, Thomas, or Simon. Driven primarily by the strength of the performances by Watts and Holland in the lead roles, The Impossible is an intense emotional experience. Watts, in a mostly physical performance, invests a near exhausting degree of pain and heartache into her character. McGregor is also excellent in the smaller role of Henry, who is perhaps the most optimistic searcher in the film. Finally, The Impossible boasts a trio of impressive performances by the three young actors, with Holland being a particular standout. Like Quvenzhané Wallis in Beasts of the Southern Wild, Holland shows that no actor is too young to tackle a role of mature dramatic heft. Thanks to the strong players in this character-driven adventure, The Impossible culminates with powerful catharsis. There isn’t a false note to the sentimentality of the family’s reunion.

Bayona also extends the plight beyond the family, often panning around and zooming out to show countless victims of the disaster, as well as the devastation the tsunami had upon the land. The film expands beyond the family particularly well in one poignant scene in which the kids encounter an elderly woman finding solace in a campfire. Played by the great Geraldine Chaplin, the woman is clearly not as fortunate as the family of tourists is. The woman, noticeably wrought with grief, tells the boys about the importance of finding hope in the face of such tragedy.

This inspiring tale could be any family’s story, really. The Impossible seems to underscore this sense by altering the actual family that inspired the film. In real life, the Alvarez Belons are a Spanish family of five. In the film, they are a British family that has settled in Japan. The script by Sergio G. Sánchez (with a story credit to Maria Belon herself) almost makes a point of avoiding the exact mention of the family’s homeland, with Watts masking her Australian accent with a British inflection and with McGregor speaking in his natural Scottish brogue. Likewise, the family’s last name seems elusive, aside from the letters that we see scrawled on Maria’s arm as she lies on her hospital bed. It’s curious that the nationality of a Spanish family was changed in a Spanish film, but the film hardly suffers for it since the disaster touched the lives of so many others.

The Impossible finds optimism in the unlikeliest of circumstances and grabs its audience with its harrowing emotional odyssey. Bayona creates a disaster that seems unflinching real thanks to top-notch, albeit sparingly used, visual effects, and through notable work by the make-up and sound team. (The Impossible is only the second film to explore the new 3D sound design.) Most effective of all, though, is the uncontrived poignancy that ripples through this powerful film. This tsunami movie might seem like an odd release for the holiday season, but it’s the kind of film that makes you want to go home and spend time with the ones you love.


The Impossible opens in Toronto December 21.
It opens in Ottawa January 11 at The ByTowne.