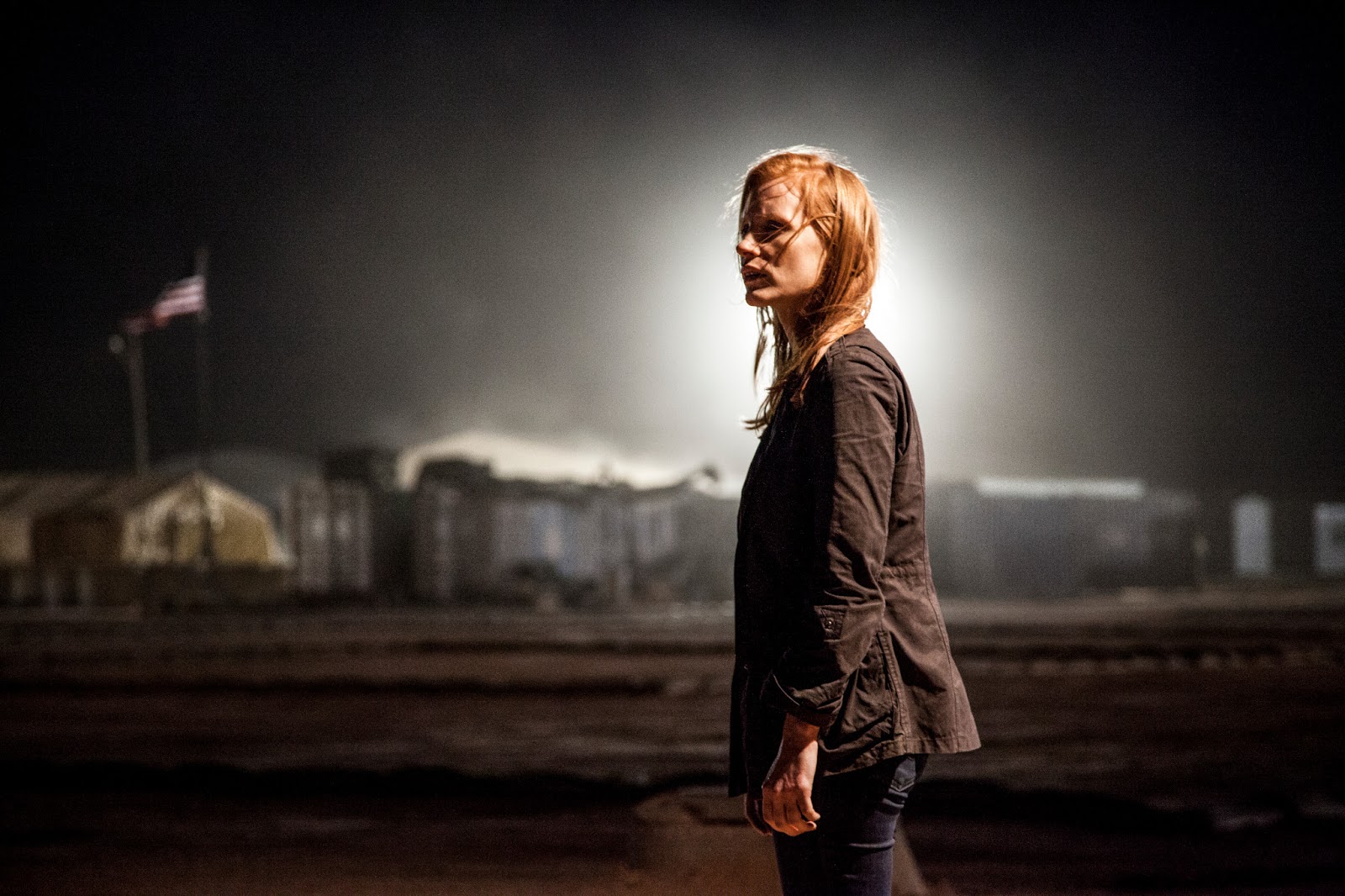 Now that the hunt for Osama Bin Laden is complete, Jessica Chastain should be sent on a mission to smoke out all members of the Academy who failed to nominate Kathryn Bigelow for Best Director. Yesterday’s snub makes absolutely no sense, since Bigelow displays a vanguard’s hand behind the camera with Zero Dark Thirty. Like her 2009 Oscar winner The Hurt Locker or her 1995 sci-fi thriller Strange Days, Bigelow offers an enthralling, if not ground-breaking, feat of cinema with Zero Dark Thirty.

Ripped from the headlines narratives have rarely offered such a sense of authenticity or clarity. The script by journalist/screenwriter Mark Boal (who also wrote The Hurt Locker) takes a breathtakingly revelatory approach to recent events, the details of which are barely known by much of the public, and embarks on a thrilling fact-finding mission that fills in the gaps with insightful drama. The keen eye for details resides in the film’s compelling protagonist. She’s a young woman named Maya, played by Jessica Chastain, who was recruited out of high school to work for the CIA.

Maya’s first real assignment is a biggie. She finds herself in Pakistan as part of an elite CIA intelligence team tasked with the mission to find Osama bin Laden. Maya’s a rookie, but she’s a killer, as her colleague Dan (Jason Clarke) notes when her co-workers, including a noteworthy Jennifer Ehle (Contagion), raise their eyebrows at the pretty girl who walks into the dusty interrogation room in her finest suit.

Maya proves herself a true mercenary, though, as her sharp mind outwits, outlasts, and outplays all her co-workers as follows a lead into a decade-long hunt for bin Laden. Like a generation of Americans, Maya has lived much of her life in a post-9/11 mindset. Looming paranoia and a need to ferret out the enemy drives Maya day by day as she studies the minutest of details and combs the desert, looking under every rock and snake hole to ensure that her lead does not get away.

Zero Dark Thirty chronicles the CIA’s hunt for bin Laden in absorbing detail. Bigelow and Boal have a unique approach for the material as they unearth the labyrinthine network into which top members of Al-Qaeda burrowed and hid in the years following the attacks of September 11, 2001. The filmmakers thrust Maya’s quest into the mindset of both the West and the Middle East: gung-ho macho attitudes abound about squashing the terrorist cells, but Zero Dark Thirty offers several encounters with sympathetic Middle Easterners, some of whom assist in the mission while others protest America’s presence on their soil. It’s all viewed through Maya’s instinctual gaze, but what transpires on screen might be the most psychologically and sociologically rich case of detective work this side of season four of The Wire.

Zero Dark Thirty also displays an even hand at the complex politics of the hunt for bin Laden. Political rhetoric in the film is scant. Not once do Maya or her colleagues articulate the need to snap the “axis of evil” or flush out “evildoers”. Likewise, all explicitly political references refer only to “The President” and President Obama emerges onscreen in one sole instance in which he appears in a TV interview and chastises the very action that has transpired in the preceding scenes.

The President insists the need to cease instances of aggressive interrogation techniques used by Americans to serve their cause. In essence, he insists that torture is an appalling endeavour that puts America on the same level as the terrorists it seeks to bring to justice. However, Zero Dark Thirty opens with an aggressive interrogation. A man is hung from his arms, deprived of sleep, and forced to hang limp in his own excrement. He is waterboarded by his interrogators, yet he doesn’t break as he is flooded by hostile tactics. The person who does snap, however, is Maya.

The man only offers proper answers once Maya suggests they prod him the old-fashioned way. Logical questions and skillful deception turn the interrogation to their favour; however, Dan notes that the detainees lack of sleep works in their favour. Zero Dark Thirty therefore begins by asking the audience how much they can appreciate the results of the manhunt if they were obtained through morally questionable means. Alternatively, Maya advances the manhunt through excellent fact-finding and deductive reasoning. The search is almost thrillingly academic in its presentation of and experimentation with various theses, all of which on some level debate the implications of the end result.

Zero Dark Thirty, ultimately, does not advocate for torture but instead paints aggressive tactics with a shade of grey. The tone with which Bigelow unfolds the events of the first act, compared with the notable turn of the second, clearly favours Maya’s investigative approach to the material. The film shows her pursuit as more tedious, gruelling, and difficult than the convenient shortcuts afforded by aggressive behaviour, but it underscores the fact that democratic detective work achieves cleaner and far more desirable results.

The greatest feat of the film, however, is the riveting final act that dramatizes the raid on bin Laden’s compound by a team of Navy SEALS. Bigelow unfolds the drama almost in real-time. Viewed through the lenses of night vision goggles (via the skillful lens of DP Greig Fraser), Zero Dark Thirty captures the defeat of bin Laden with documentary-like authenticity. All the choreography of the tactical and technical teams—both in front of the camera and behind it—works so seamlessly that Bigelow makes the outcome of Maya’s work utterly suspenseful. The last act of the film alone should have merited a win for Kathryn Bigelow, but the film itself is a landmark effort regardless of what the Academy says.

Chastain’s performance as Maya is equally notable. Like Bigelow’s own career of forging ahead in a male-nominated industry, Maya fearlessly stands out amongst her male colleagues. She begins the film as a reluctant participant in the aggressive techniques that Dan uses in his interrogations. Maya, at first a plucky go-getter, gradually becomes hardened by the job. The dark turn in the character is felt by Chastain’s compelling performance, which wears the psychological toll of the manhunt in every frame. Like Meryl Streep, Chastain has a face that is impeccably well-tailored for screen acting, as it registers the subtlest of details for the camera. The war in Zero Dark Thirty goes on in Maya’s mind as she tries to remain one of the good guys

Bigelow offers her best film yet with Zero Dark Thirty. Not only is it the best action film of the past few years, but it’s also one of the most intelligent, intuitive, and absorbing dramas to hit the screen in quite some time. Even though the fateful killshot of May 1, 2011 ensures that all viewers know the outcome of Zero Dark Thirty, what transpires onscreen is edge-of-your-seat entertainment that leaves one breathless.