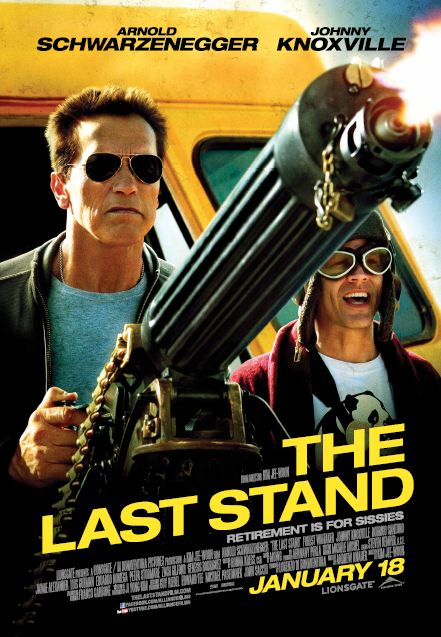 “Retirement is for sissies.” I can’t think of a better tagline to follow up the post for our last contest, Quartet. (There’s still time to enter that one, too!) Arnold Schwarzenegger proves that he’s not going to retire after ending his term as Governor of California. He’s back to kicking butt.

Action icon Arnold Schwarzenegger makes his much-anticipated return to the big screen in Korean director Kim Jee-woon’s hard-hitting US directorial debut, The Last Stand. After leaving his LAPD narcotics post following a bungled operation that left him wracked with remorse and regret, Sheriff Ray Owens (Schwarzenegger) moved out of Los Angeles and settled into a life fighting what little crime takes place in sleepy border town Sommerton Junction. But that peaceful existence is shattered when Gabriel Cortez (Eduardo Noriega), the most notorious, wanted drug kingpin in the western hemisphere, makes a deadly yet spectacular escape from an FBI prisoner convoy.

Thanks to our friends at Alliance Films, we have fifteen (15) double passes to the Ottawa sneak peek of The Last Stand. All you have to do to enter is answer the following question: What is the title of Arnold Schwarzenegger’s recently released autobiography?

Email your answer along to contests@cinemablographer.com with the subject “Last Stand.” Bonus entries go to anyone who RTs this contest on Twitter or shares it on Facebook!
Contest closes Monday, January 14th at noon. Screening takes place Wednesday, January 16th.

The Last Stand opens in Ottawa on January 18th.