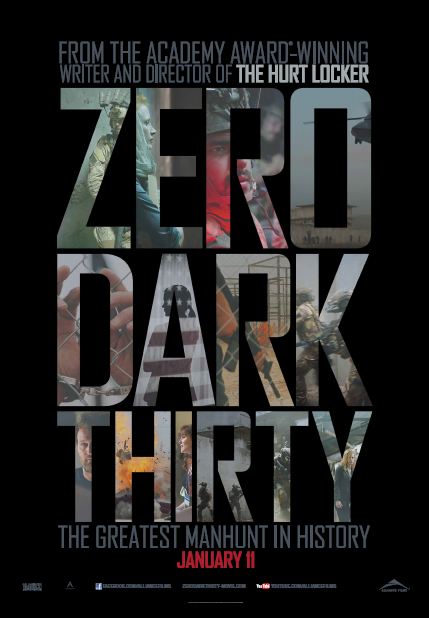 The Oscar nominations are just days away! In fact, the Academy is set to unveil the nominees on January 10th and, in an exciting coincidence, Alliance Films is having an Ottawa sneak peek of Zero Dark Thirty, which is bound to be among the films honored at this year’s Academy Awards. Zero Dark Thirty is the timely new film from Oscar winning director Kathryn Bigelow about the ten-year manhunt for Osama bin Laden. For a decade, an elite team of intelligence and military operatives, working in secret across the globe, devoted themselves to a single goal: to find and eliminate Osama bin Laden. Zero Dark Thirty reunites the Oscar® winning team of director-producer Kathryn Bigelow and writer-producer Mark Boal (The Hurt Locker) for the story of history's greatest manhunt for the world's most dangerous man.

Thanks to our friends at Alliance Films, we have ten (10) double passes to the Ottawa sneak peek of Zero Dark Thirty. All you have to do to enter is answer the following trivia question: Zero Dark Thirty stars Academy Award nominee (and Cinemablographer favourite) Jessica Chastain. In what recent stage production did Chastain make her Broadway debut?

a) The Heiress
b) Othello
c) Tree of Life: The Musical
d) Doubt

Email your answer to contests@cinemablographer.com with the subject “Zero Dark Thirty.” Bonus entries go to anyone who RTs this contest on Twitter or shares it on Facebook!