Mama
(Spain/Canada, 100 min.)
Dir. Andrés Muschietti; Writ. Niel Cross and Andrés Muschietti & Barbara Muschietti
Starring: Jessica Chastain, Nikolaj Coster-Waldau, Megan Charpentier, Isabelle Nélisse.
Toot toot! All aboard the Chastain Train! Jessica continues her roll of impressive credits with Mama, her first foray into the horror genre. Mama is also Jessica’s first Canadian credit, as this Canuck-Spanish co-pro, executive produced by horror master Guillermo del Toro, was shot in and around Toronto and Quebec City. As a filmgoer who shamelessly champions Canadian content, but is often sceptical of scary films, I’m pleased to announce that Mama is not the caboose of the Chastain Train. It’s a highly entertaining film and a stylish, atmospheric entry into the horror genre.

Chastain stars as Annabel, a punk rocker who becomes a reluctant mother-to-be when her boyfriend (Nikolaj Coster-Waldau) adopts his two orphaned nieces. The girls, Victoria and Lilly, were abandoned in the woods after their father (Coster-Waldau, in a dual role) kidnapped them following a shooting spree that left several victims, including their mother. The girls, however, survived under the protective care of a strange cherry-offering ghost named Mama.

As the girls—two little Nells or inhabitants of Room—reveal under the surveillance that continues while they’re under Annabel’s care, Mama may not actually be the imagined presence their doctor (Daniel Kash) presumes her to be. Less of a coping mechanism and more of a smother-mother, Mama is watchful and protective of the girls as they become Annabel’s children. The older girl, Victoria (Megan Charpentier), is adapting well to her new mama and papa, but the younger child, Lilly (Isabelle Nélisse) is a real wild child. Finding an in-between-place amid the dead girl from The Ring and Damian in The Omen, Lilly is a creepy, bug-eyed, and sweet little girl. Unlike the recent onslaught of horror films have been possessed by demon children since they scared audiences with The Ring, Mama makes the horror a shared relationship between mother and child. Experiences should be for the whole family. 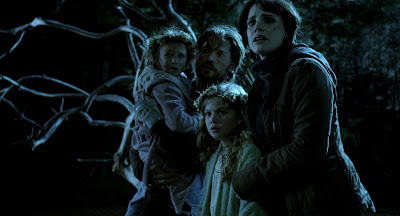 Director/co-writer Andrés Muschietti, expanding his own short film into feature length, makes a creepy and atmospheric haunted house movie. Offering some chilling compositions with cinematographer Antonio Riestra, Mama makes effective use of place and space by revealing Mama’s presence in the film through simple set-ups, most notably a divided hallway that brings the audience in the loop and keeps Annabel in ignorance. Negative space hasn’t looked so creepy in a while, depending on what one thought of Tom Hooper’s direction of Les Misérables.

Mama makes sparing use of pop-out surprises and overbearing music cues, and instead relies on creepy set-ups of children/Chastain in peril. The kids are partly the vessels for the scares, too, so one is often on edge watching Annabel try to console the kids since one never knows if they’re going to play Jekyll and Hyde and take a bite out of her. Isabelle Nélisse, the younger sister of Sophie Nélisse who won the Genie last year for Monsieur Lazhar, is especially creepy for such a young performer. Children creep me out regardless, but they’re especially hair-raising when they’re quiet, complacent, and stuffing their mouths with slimy, squishy moths. Kids are gross.

Just as Mama gets creative with the eerie kid vibe, so too does the film try something new with the monstrous feminine. Mama reverses the typical tropes of motherhood and monstrosity. Annabel isn’t carrying a baby, nor does she particularly want to take on the burden of straightening out a pair of feral children. Annabel has night terrors, but they’re not paired with morning sickness or icky shots of menstrual blood. At the other end of the family tree is Mama, who clings to motherhood like a mania. Like Annabel, Mama has no idea how to raise a child, but her obsession for parenthood manifests itself as a fatal possessiveness. Whereas expectant mothers like Rosemary might see their baby as horrific manifestations, Annabel’s torment from Mama makes her a better parent. Annabel, an unenthusiastic mother, ultimately finds herself fighting for kids she didn’t want.

Mama is an odd sort herself. She is a twisted, if unconvincingly rendered, ghoul that floats around the house like the love child of spirits from The Grudge and A Nightmare Before Christmas. Played by a man (Javier Botet), yet voiced by a woman (Jane Moffat, who also appears as the girls’ Aunt Jean), Mama is an oddly androgynous Goth, much like Annabel herself.

Annabel couldn’t be further from the classy, charismatically girly persona that Chastain embodies on award season red carpets. Death becomes her, too, since the punk rocker look suits Chastain surprisingly well—she’s the motherfucker who found bin Laden, after all—and Mama showcases another facet of Chastain’s versatility. Scared shitless, but confident and maternal at the same time, Annabel is the girl percolating underneath Maya’s stoic veneer in Zero Dark Thirty.

Chastain’s characteristically strong turn in this spooky film often makes Mama resemble del Toro’s other films of past and present. Although Mama reworks conventions of deadly kids and deranged parents, Mama is also possessed by the ghost of horror movie clichés. For every refreshing surprise in the film, there is a tired sight gag, an old lady in the archives, or a character who wanders into the woods in the middle of the night. Likewise, Mama comes to an abrupt climax that pulls everything together a bit too conveniently, but then offers an unexpected twist to complicate the typical resolution that sees the nuclear family triumph in the end.

Younger audiences will no doubt find the film scary—I hand a group of underage screamers at my screening—and horror buffs will love the stylish atmosphere of Mama. Mama is a highly entertaining film even though one’s eyes roll one away from the edge of the seat. The Chastain Train keeps on rolling too: it’s scary how this talented actress stayed hidden for so long!