Retirement is for Sissies


The Last Stand
(USA, 107 min.)
Dir. Jee-woon Kim, Writ. Andrew Knauer, Jeffery Nachmanoff
Starring: Arnold Schwarzenegger, Forest Whitaker, Eduardo Noriega, Rodrigo Santoro, Jaimie Alexander, Johnny Knoxville, Luis Guzmán, Peter Stormare.
“Wham!” “Bang!” “Pam!” “Kablammo!” Somewhere at Rolling Stone magazine Peter Travers is churning out a series of one-word pull-quotes for The Last Stand. The Last Stand, a riotous action/comedy/western, is an inspiration for the old guys. Arnold Schwarzenegger proves that retirement is for sissies as he gets back to pumping lead after his stint in political office. Arnold still packs a mean punch and proves his years of public service haven’t made him soft. At 66 years old, Arnold is as comfortable behind the machine gun as Helen Mirren is. Whether The Last Stand is a vacation full of beans or an audition tape for Red 3, Arnold has a lot of fun and provides good old action movie escapism.

Arnold’s return to the camera—his last appearance was a cameo in The Expendables—smartly plays to his heightened age. His character, Sheriff Ray Owens, has settled into a quiet life in the sleepy border town of Sommerton Junction. Sommerton Junction is the kind of place where an old man can relax and enjoy a cup of coffee at the local diner while he watches tumbleweeds roll through the dusty thoroughfare. Owens' friendly little hamlet, however, gets a taste of big city violence when a Mexican drug lord named Cortez (Eduardo Noriega) escapes from the Feds during a high-security transfer. Cortez escapes in a souped-up CorvetteTM and rips through the Wild West, unleashing a string of bloody carnage as he evades the efforts of Special Agent Bannister (Forest Whitaker). Unwilling to let the evil mobster disrupt his small town and use it as an escape route to freedom, Owens and his fearless troupe of local deputies (Jaimie Alexander, Johnny Knoxville, and a very funny Luis Guzmán) take the last stand for small town America. 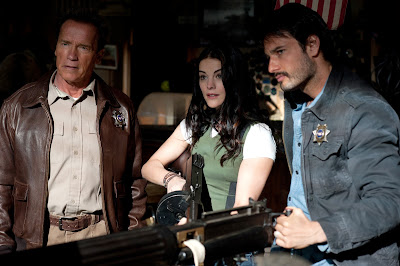 Owens is world-weary old westerner. Arnold’s acting skills haven’t declined during his time away from the film set (although they haven’t improved, either), since politics is essentially acting with a different weapon. Arnold still has the action-star stuff of his earlier days, yet Owens is a much different, more reluctant hero than the gung-ho gunslingers Schwarzenegger usually plays. Owens embodies a disdain for bloody violence (he left a career in LA after witnessing too much bloodshed), but he isn’t afraid to fire a bullet in order to protect his idyll way of life. Unlike the gun-toting cops turned robbers of Gangster Squad, however, Owens only uses violence as a means to an end – hyperbolically so, as we see the quaint country sheriff pull out the heavy artillery to keep the peace.

Bullets fly and bodies pile up, but The Last Stand never takes itself too seriously. The English-language debut by South Korean director Jee-woon Kim (I Saw the Devil), The Last Stand is a drolly blood-soaked exaggeration of American cinema. It's a stylish one, too, with the director orchestrating some high-octane action sequences, as well as a final car chase that slows the action down into a corn field and lets the stalks fill the screen and builds suspense with the crunch of maize. Owens' defense of his town is ultimately a comical, if overlong, take on the western genre, as The Last Stand is a tongue-in-cheek action movie that offers a funny little farce on America’s passionate right to bear arms. Even a cantankerous old granny pulls out the big guns to fire back at the bad guys. One never knows who might be packing heat in these friendly little towns.

The Last Stand’s fun play on America’s mania for gun violence couldn’t come at a better time. Both the right and the left could enjoy the film, since it pits gun violence as a ridiculous circus, a brainless bloodbath of sorts that intrudes on Arnold’s small country town and disrupts the ideal way of American life. On the other hand, when it comes time for Arnold and the obliging granny to arm themselves with high-calibre weapons, the gun nuts at the NRA could easily praise the film for showing the benefits of the Second Amendment. Either way one looks at The Last Stand, though, America’s love for guns offers an armament of jokes. It simply depends whether one is laughing at the gun nuts or with them.