What is the Price of Oil and Gas, You Ask? 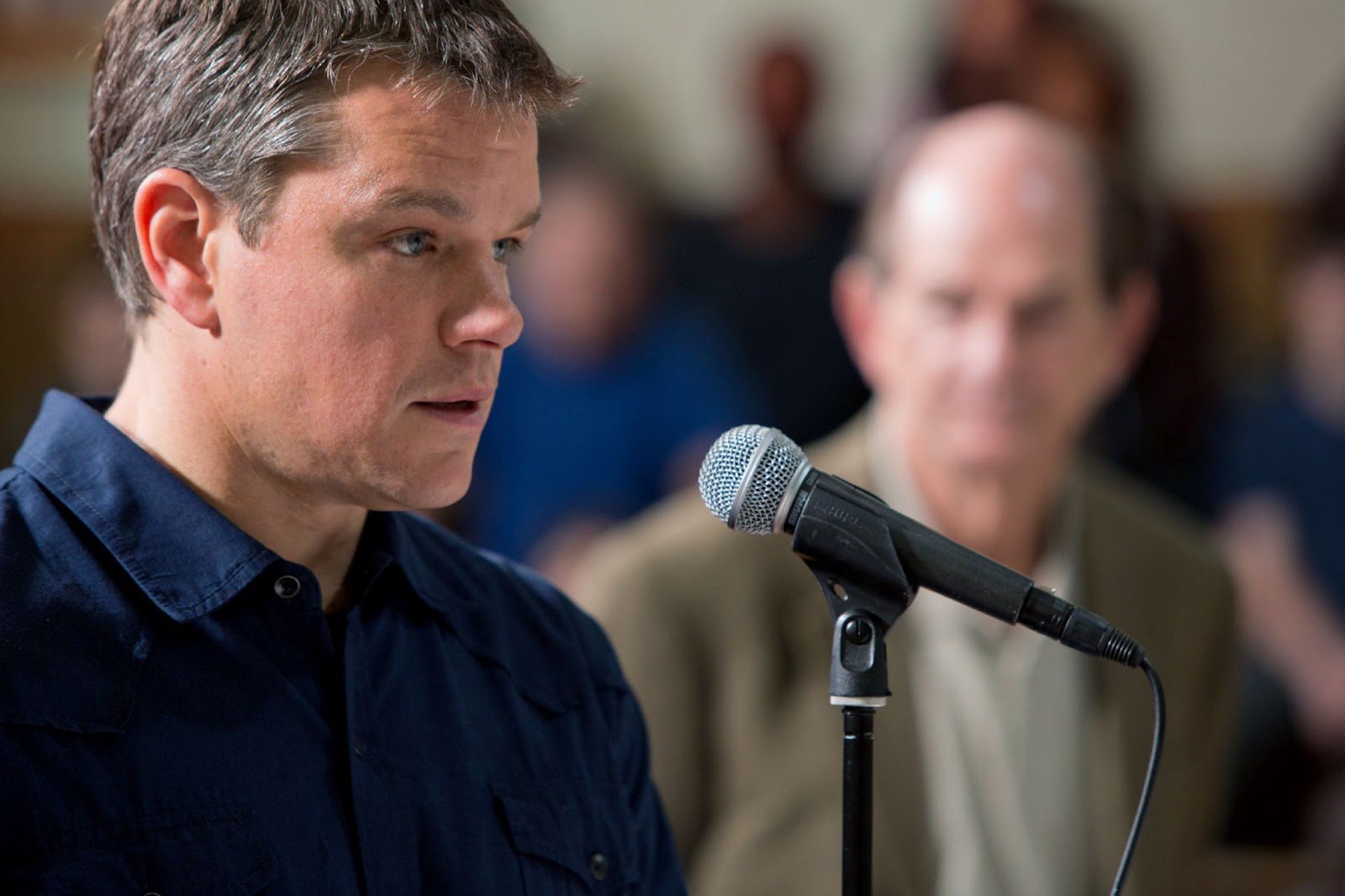 What is the price of oil? You might recall the question appearing as the ad line for another Matt Damon movie, Syriana, 2005’s provocative look at the global ripple effects of the oil industry. Damon’s character in Promised Land, Steve Butler, a salesman for the corporation of Global Gas, asks the audience what cost they’re willing to pay to escape their reliance on oil. “If you’re not for this, then you are for oil,” Steve says while trying to convince the townsfolk of McKinley, Pennsylvania, that natural gas is smart viable solution. The question is one of several bold queries raised in Promised Land, the new film by Damon’s Good Will Hunting director Gus Van Sant.

Scripted by Damon and co-star John Krasinski, Promised Land puts Steve in the thick of small town America, the backbone of the country and the heartland of the American dream. Full of dairy cows and stores that sell both groceries and guns, McKinley is one of those friendly little towns where everyone knows your name. It’s the small kind of place that David Lynch might fill with white picket fences and plastic-wrapped teens. There’s a dark underside to Van Sant’s quaint American town, however, since Steve aptly notes how the residents of the county’s rolling hillsides cling to a dying ideology even as it bleeds away their livelihoods. 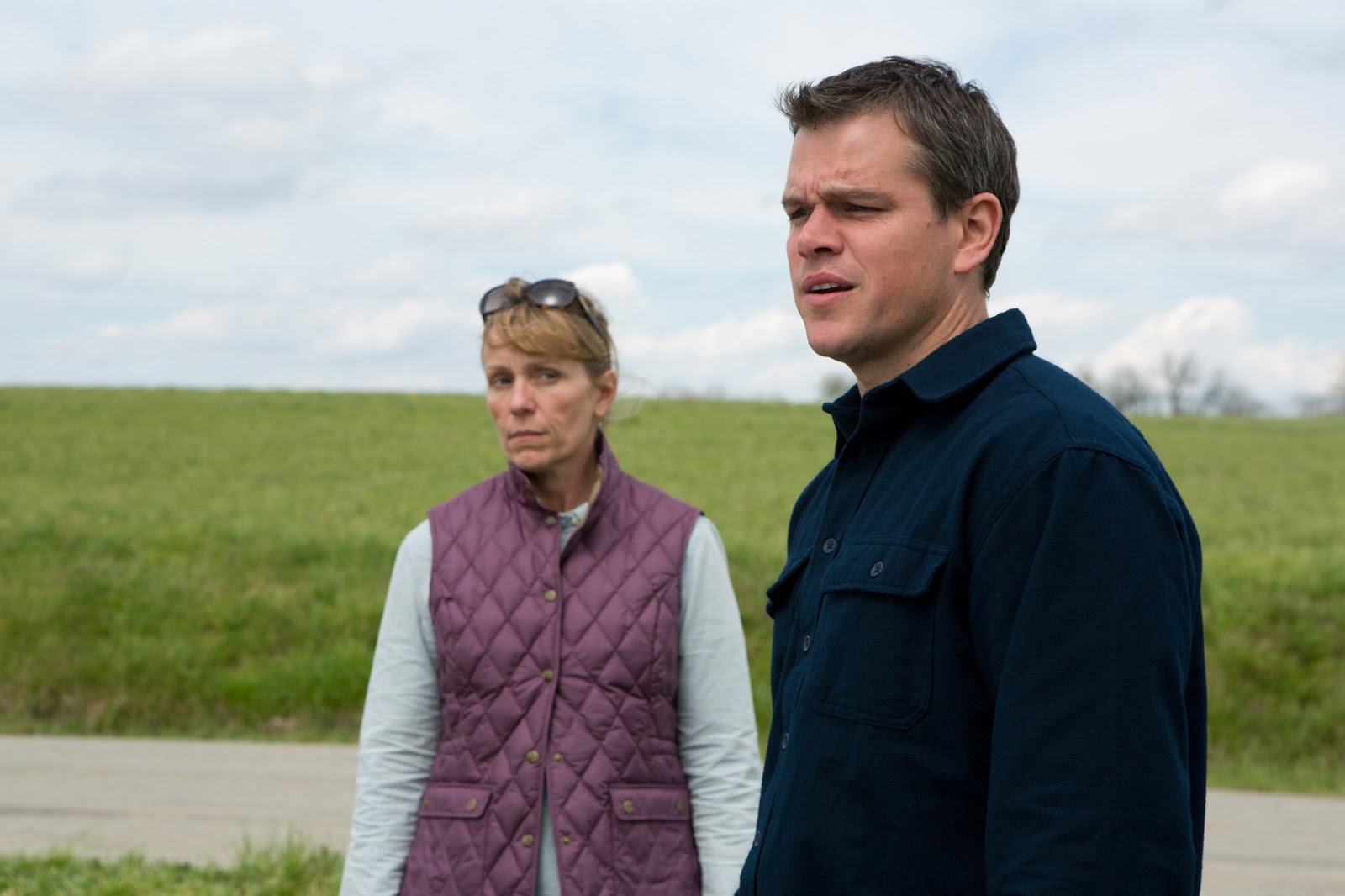 Steve is in the town with his business partner Sue (played with sassy flair by Frances McDormand) and they’re on a mission to convince as many landowners as they can to lease their land to Global Gas. By offering their land for drilling, Global Gas can mine the natural riches of the town and, in turn, yield a geyser of riches, jobs, and tax dollars to the decaying town. It’s a bit like the trickle-down effect, except that the gas company lets the needy townsfolk turn on the tap so that it can loot-and-plunder the land.

Several of the simple townspeople are easily convinced by Steve and Sue’s suave pitch and modest proposal. What cash-strapped farmer would refuse a cash advance and healthy residuals in return for a little drilling? Alternatively, Promised Land pitches natural gas as an intelligent alternative to foreign oil: keep the mining on American soil and the money stays in the local economy; likewise, the country benefits from profits that stay in America and from cleaner consumption. Steve articulates that natural gas is smart solution that can save a fledgling nation that has driven itself into a corner with an ideology that runs on the myth of cheap oil for all.

On the other hand, is natural gas the best fuel to save America? Steve and Sue’s presence in the town is cramped by the appearance of an outspoken science teacher (Hal Holbrook) who lists the harmful side effects of drilling for natural gas. (Viewers of Promised Land might want to see the NFB doc Wiebo’s War to observe the effects that mining gas can bring.) He proposes that the citizens weigh the benefits offered by Global and put the gas company’s proposals to a vote. Soon thereafter, a muckraking environmentalist, named Tom Noble (named either as a nod to the nobility of green-thinking or as a hat-tip to the noble gases), played by John Krasinski, arrives in town and protests to the people of McKinley that he is a small-town farmer whose land was decimated by the harmful effects of Global’s drilling tactics.

Tom, unfortunately, comes off as an arrogant d-bag, even to a liberal with environmental concerns such as me. Promised Land therefore offers a debate with ambiguous politics: should viewers side with the ever-likable Matt Damon as he sells the riches of corporate goodies, or should they align themselves with the film’s antagonist, a ball-cap wearing showboat and obnoxious goon? On one hand, Promised Land forces viewers to consider the pros and cons of alternative energy by pitting the protagonist as the voice-box for the oft-vilified gas company. On the other hand, the unlikable Tom implores the audience to dispute counterarguments for natural gas. Does an alternative to oil amount to a hill of beans when the environmental damage simply occurs while extracting the resource, rather than while consuming it?

Promised Land unfortunately mars its intriguing debate. Instead of leaving the query open for audiences to cast the deciding vote, the film opts for an unforgivably convoluted (and heavy-handed) plot twist that ultimately elides big questions and points the finger at corporate greed. The film is well-intentioned, as it emphasizes a need for more awareness. It also has admirable convictions, since its credits note that the filmmakers “used sustainability strategies to reduce its carbon emissions and environmental impact.”

Even if the film muddles the political message, Promised Land is a consistently compelling character study thanks to Damon’s charismatic performance and to the believable character arc that Steve undergoes. Also worth noting is a nice turn by the ever-reliable Rosemarie DeWitt as Steve’s love interest Alice the schoolteacher, whose charming passion for preserving the land and her heritage helps bring about Steve’s reversal of fortune. Perhaps Steve’s arc is Promised Land’s real message. It doesn’t really matter whether natural gas is less evil than foreign oil, or if corporate business equals more profits for all. The promise for change ultimately resides in individual choices or actions. One can advocate for a cause, as Steve and Tom do; one can see energy simply as a job or transaction, as Sue does; or one can even follow Alice’s lesson of cultivating the earth for oneself. Promised Land doesn’t leave too much room for alternatives, but it shows that some necessary choices need to be made in order to preserve our land and livelihoods.