I’ll give Seth MacFarlane credit. He did a decent job as the host of Hollywood’s biggest night. He had big shoes to fill after Tina Fey and Amy Poehler received good reviews for the Golden Globes, and he matched them fairly well considering he was asked to fill more of the broadcast than they were. MacFarlane opened the night by making fun of his juvenile humour with a hilarious bit involving William Shatner as Captain Kirk, who travels back in time to warn MacFarlane about curbing a disastrous hosting job. The sketch included a fun send-up to Sally Field’s days as The Flying Nun, plus some throwback dance numbers to classic musicals (the best of which was the Fred Astaire/Ginger Rogers tribute by Channing Tatum and Charlize Theron. The opening act ended with the musical number “We Saw Your Boobs” in which MacFarlane got all his frat-boy humour out of the way before moving on with a (mostly) funny and tasteful night that fed on song and dance. Ben Affleck had the swan song of the night when Argo won Best Picture and his co-producer Grant Heslov thanked him for his work as a director.

I watched the broadcast with a group of friends this time and even though it was difficult to hear much of the show, it was a fun evening among fellow film buffs. We began the night by enjoying a potluck menu of items made in tribute to the nominated films. Among the spread were hushpuppies in honour of Beasts of the Southern Wild, crabby snacks (dee-lish!) as a nod to Silver Linings Playbook, Frankenwieners, Abra-HAM sandwiches, bread for Les Mis (not stolen), and pita chips and hummus for Zero Dark Thirty. As dessert, there was Life of Pi pie and a medley of Skittle and chocolates eggs, which were brought as a hat tip to @Michael_Haneke, whose Twitter feed provided the best commentary of the night. I made a white cake in honour of Django Unchained.

We got to salute Django with white cake early on in the evening (well, we waited until the commercials to cut it) when Christoph Waltz won the night’s first award for Best Supporting Actor for his performance as bounty hunter Dr. Schultz. Winning his second Oscar for a Tarantino film after his Best Supporting Actor win for 2009’s Inglourious Basterds, Waltz made history as the first male actor to win two Oscars for performances in films by the same director. The feat has been done only once before, by actress Dianne Wiest, who won Best Supporting Actress for her performances in the Woody Allen films Hannah and Her Sisters (1986) and Bullets Over Broadway (1994). Oddly enough, Quentin Tarantino and Woody Allen are my favourite directors!

Tarantino won Best Original Screenplay for Django, besting Mark Boal for Zero Dark Thirty. Boal’s script for The Hurt Locker beat Tarantino when he was last nominated for Basterds.
Other wins for the record books came from two of the night’s most forgone conclusions: Adele’s “Skyfall” became the first song from a James Bond movie to win Best Original Song, and Lincoln’s Daniel Day-Lewis is the first actor to win Best Actor three times. The night’s two other acting winners, Anne Hathaway (Les Misérables) and Jennifer Lawrence (Silver Linings Playbook), were well-deserved wins. All the actors gave gracious speeches, although Jennifer Lawrence won the prize for Most Excited when she tripped on the large train of her dress and slipped walking up to collect her prize. Don’t worry Jennifer, this means that your win will always be remembered!

Other notable wins of the night included a tie for Best Sound Editing between Zero Dark Thirty and Skyfall (the last tie was in 1969 when Barbra Streisand and Katherine Hepburn tied for Best Actress), and Anna Karenina’s scoop of Best Costume Design for Jacqueline Durran’s impressive work. It was nice to see the best film of the year acknowledged. Among the highlights of the show were Meryl Streep’s 'wedgie,' Jack Nicholson’s hilarious reaction shots, and Best Actress nominee Quvenzhané Wallis, who stole the broadcast by showing off her pipes. Also good were some of the night’s song performances, especially the tribute to contemporary musicals sung by Best Supporting Actress winners Catherine Zeta-Jones, Jennifer Hudson, and Anne Hathaway (along with the cast of Les Mis). Hudson’s performance of “And I Am Telling You I’m Not Going” from Dreamgirls was one of the few moments when our party of twenty fell silent. (The other was for Adele’s performance of “Skyfall,” naturally.)

Also worth noting is how well Canada was represented at the Oscars even though we lost the prize for Best Foreign Language Film to Amour. Among the Canadian winners were composer Mychael Danna and visual effects supervisor Guillaume Rocheron, both of whom took home prizes for Life of Pi. Best Director winner Ang Lee also thanked the Canadian crew and Life of Pi author Yann Martel.
Canada also got a welcome, but unnecessary, word of thanks from Ben Affleck as he thanked those who participated in the film and in the story that the film depicts. Affleck had come under consistent criticism by ex-Canadian Ambassador Ken Taylor and some members of the Canadian press, who charged that Argo put Taylor in the backseat in order to amplify the hero role for Tony Mendez. According to the CBC, Taylor was satisfied with the acknowledgment made during Affleck’s Best Picture speech. Taylor and his wife Pat also received a special shout-out from Argo screenwriter Chris Terrio, who won Best Adapted Screenplay. Argo's win continues to boost the impact of Canada's top festival, the Toronto International Film Festival, and shows TIFF's impact on the Oscars since it was the runner-up for last year's People Choice Award. The festival's big winner, Silver Linings Playbook, didn't do too badly, either.

Argo’s win capped off a good broadcast that paid tribute to old-style entertainment. Argo is a worthy winner to stand for a strong year at the movies. I was generally pleased with the winners overall. Even though many of my top picks didn’t win, most of the prizes went to second choices and/or contenders who were equally worthy. I did alright with my predictions, too, getting a score of 20/24. I missed Supporting Actor, Sound Editing, Live Action Short, and (grumble) Production Design. Overall, it was a good show to end a great movie year. Here’s looking forward to Oscars 2014!

“Skyfall” by Adele and Paul Epworth, from Skyfall

Finally, it wouldn't be an Oscar recap without my picks for the Best Dressed actresses of the night. I think the room voted for Jennifer Garner, but I pick: 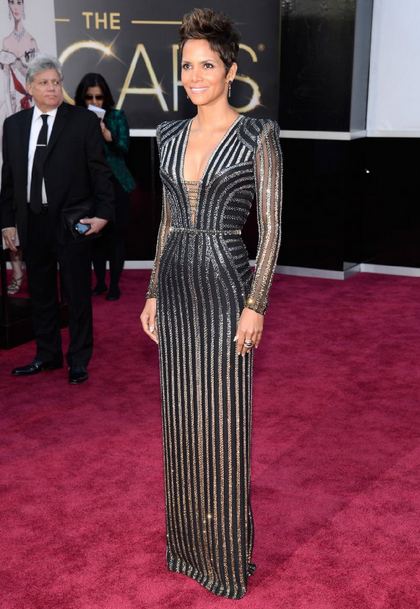 What did you think of the show/winners?