(Denmark/Sweden/Czech Republic, 137 min.)
Dir. Nikolaj Arcel, Writ. Nicklaj Arcel & Rasmus Heisterberg
Starring: Alicia Vikander, Mads Mikkelsen, Mikkel Boe Følsgaard, Trine Dyrholm, David Dencik.
A Royal Affair is a Danish film? Really? Where are the chalk lines? Where is the shaky camera? Why is there such stunning production value? The film is a notable departure from the Dogme 35 style that sometimes stereotypes Danish cinema thanks to the successful films of Lars Von Trier; however, A Royal Affair, Denmark’s Oscar nominee for Best Foreign Language Film at this year’s Academy Awards, has an essence, a vitality, and a full-bodiedness that appears in few faultlessly crafted heritage films.

A Royal Affair dramatizes a chapter of Danish history that’s almost too fascinating to believe. This superb period piece explores the reign of King Christian VII (played by Mikkel Boe Følsgaard, who won the Silver Bear at Berlin for his performance) and the tumultuous route to social change that progressed during his life. A mad king, Christian is a puppet for his councilmen. The King merely signs papers that put more money into the hands of the rich and then goes off to enjoy a romp with the hookers like a libertine.

The King’s freewheeling ways are to be put in order by a marriage to Caroline (Anna Karenina’s Alicia Vikander). An English royal, Queen Caroline is immediately marked as ill-suited for a betrothal to Christian, since she catches him pants down on their first meeting and then he proceeds to grant his dog far more attention than he affords her. Poor first impressions are a bad omen for marriage, but they foreshadow a spellbinding marital drama.

More tensions arise when Caroline realizes that she is superiorly better versed in the theories of social progress circulating throughout Europe than her husband is. Writers of the Enlightenment are censored in Denmark, as are Caroline’s books, so the Queen’s open mind is alien to the Danes. The King rejects her ideas. So too does the King reject Caroline’s very person since her finds her to be a cold fish compared to other ladies of the night. He even refers to Caroline as “Mother”, if she didn’t feel unloved enough. 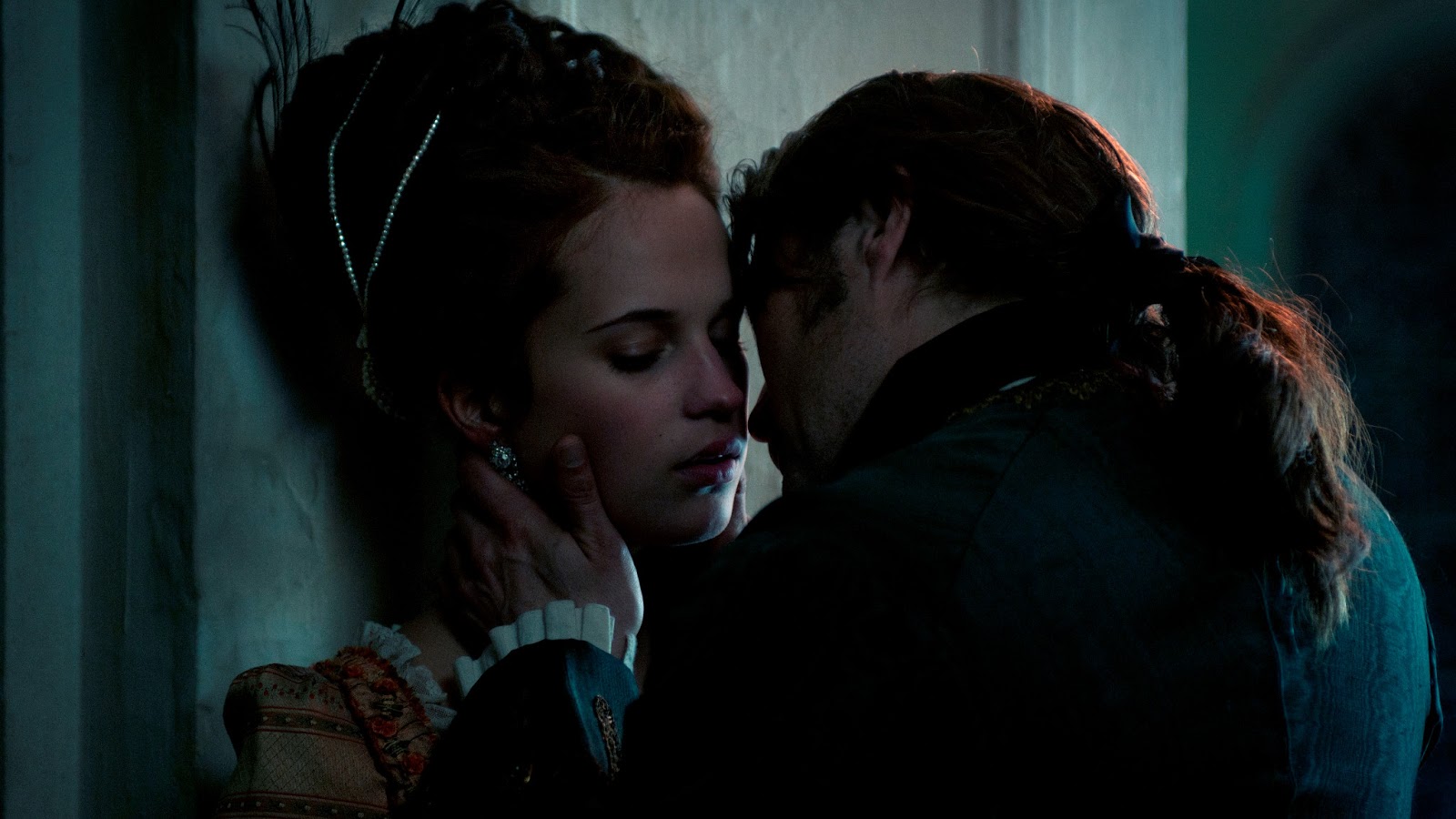 A changing of the guard happens, however, when the King rebuffs Caroline. Put off by her husband’s lechery, Caroline gradually develops a friendship with his closest confidant. The King’s doctor, Johann Struensee (Mads Mikkelsen), is a far better prescription for Caroline’s needs, as well as for Denmark’s. Dr. Struensee, like Caroline, is a freethinker himself. Not only is he as well-read as the Queen is, but he has also written several treaties on the need for social reform. Their affair begins with book-lending (don’t they all), but then escalates into full-scale bodice-ripping.

A Royal Affair pairs the seduction of Queen Caroline with Struensee’s seduction of King Christian. Not willing to see their country continue its slip into decay as the wealthy fête their own opulence, Christian proffers the theses of his conversations with Caroline to the King. The King, surprisingly, yields to Struensee’s advice and reforms Denmark to better his people. The affair explodes into an engrossing ménage à trois as both the King and Queen grant Struensee more favour.

The infidelity drama of A Royal Affair is especially riveting thanks to the strong trio of performances by the lead actors. Serving as the audience’s eyes throughout the royal affair, Vikander is truly magnetic as the Caroline. Mikkelsen is equally compelling as the film’s dramatic turntable, while Følsgaard is at turns both hilarious and horrifying as the mad King. There’s a hint of Amadeus within the relationship of Struensee and King Christian. One a man on the sidelines, and the other a madcap centre of attention, Mikkelsen and Følsgaard are two binary forces.

There’s an underlying sense of menace to A Royal Affair, however, since the King’s former allies resent the influence of his closest confidant. As the wicked wealthy plot the demise of social reform, the history lesson in A Royal Affair gains increasing resonance: the power of the rich controls the needs of the majority and, as remains the case in some circles of today, health care and quality education aren’t granted the priority of pastry cakes and personal property. Director/co-writer Nikolaj Arcel and co-writer Rasmus Heisterberg (screenwriters of the Swedish The Girl with the Dragon Tattoo) develop the complexly intertwined conflicts with near literary craftsmanship, tone, and insight. The film is thrillingly cinematic, though, as the gorgeous cinematography by Rasmus Videbæk and the score by Gabriel Yared and Cyrille Aufort heighten the drama with more nuance than written words ever could. It’s almost too hard to believe that the fight at the centre of A Royal Affair is a contemporary issue. How can social equality be so long in the making, and how could progressive thinkers ever be so vilified?

The morale of the film is underscored by its lavish production values, which accentuate extravagance and excess in every frame. The costumes by Manon Rasmussen are impeccably tailored jerseys for the wealthy, as is the immaculate production design by Niels Sejer, which is every bit as ornate as the Palace of Versailles. One can easily see why Marie Antoinette lost her head in the French Revolution. The film is refreshingly optimistic, though, for a dramatization of such a bleak chapter of history. A Royal Affair finds room for good people to exist in the world. It celebrates intelligent, forward-thinkers as the true heroes of history.

A Royal Affair plays in Ottawa at The ByTowne until February 14.