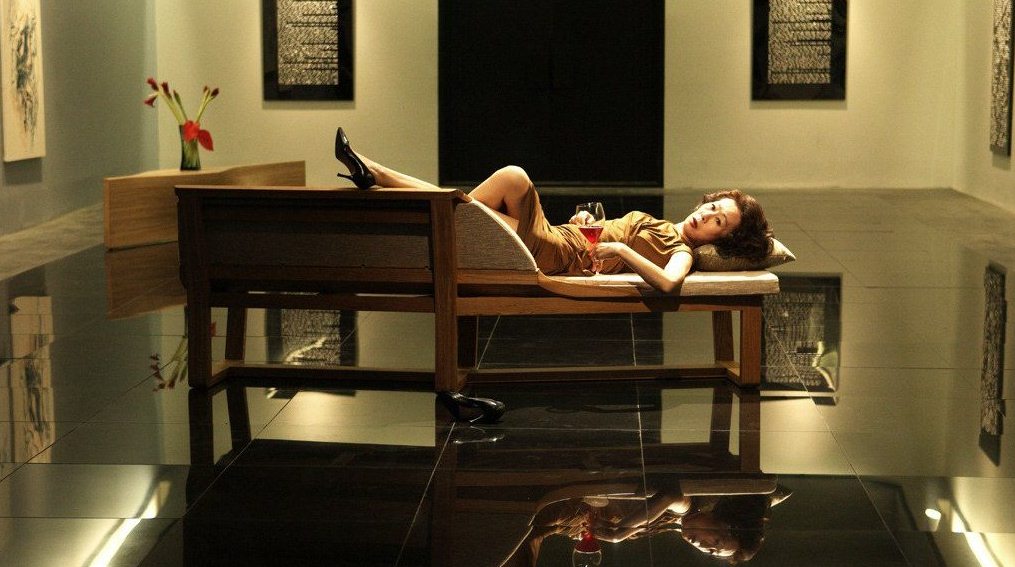 Greed has an odd aftertaste. Bitter as a lemon, but with the scrumptious rich feel of a good piece of duck, greed fattens you up by deriving pleasure from extra calories. People who can afford this palette never lose the taste for succulent greed. Greed and gluttony go hand-in-hand, as those who can have more pile on one extra helping after another until they’re too fat to move. Just look at Henry VIII, who became more rotund with each new wife. Like Henry VIII, The Taste of Money has a drumstick in one hand and a comely maiden in the other. A spectacularly gluttonous film, The Taste of Money serves up an all-you-can-eat buffet of cinematic excess. Director Im Sang-soo offers seven sinful steam trays in The Taste of Money, his follow-up/sort-of-sequel to the audacious 2010 hit The Housemaid. Greed and gluttony are the main course in this smorgasbord, with lust as an appetizer and wrath as a finger-licking dessert. 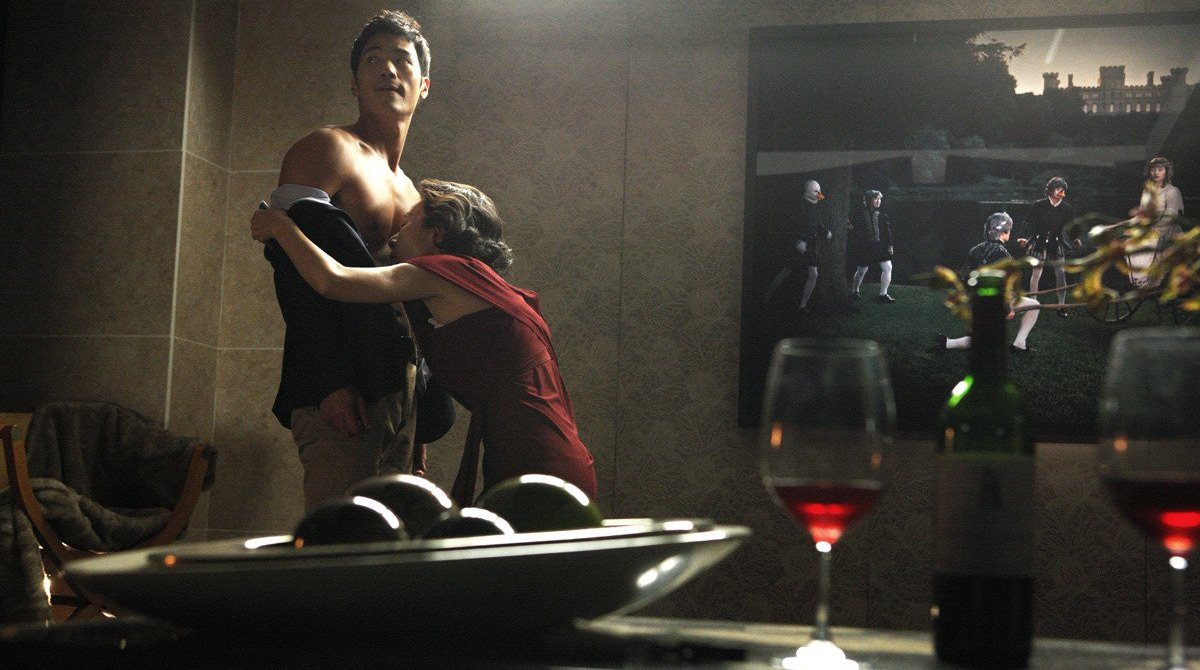 Once again setting the drama in a large cavernous mansion, Im offers another aberrant story of the vile tensions of class, wealth, and privilege. Downstairs in the manor—and occasionally downtown—are the servants. Young-jak (Kim Kang-woo) is Mr. Yoon’s chief secretary. On the level from a moral standpoint, Young-jak serves as the audience’s eyes throughout this tawdry glimpse into the lives of the wealthy. We know that Young-jak is bound to be corrupted at some point, for, in the film’s opening scene, his employer, Mr. Yoon (Baek Yun-sik), offers the protégé a free taste of money as he stacks bundles of bills into a briefcase. Young sniffs the money as heartily and thoroughly as one breathes in a good wine. Young takes pride in his moral virtue and refuses to sell out to his employer’s temptations.

More easily tempted by Mr. Yoon is Eve (Maui Taylor), the family’s Filipino maid and caregiver to the children. Like Eun-yi in The Housemaid, Eve performs dirty chores for the family in the afterhours. Unlike Young, though, she’s given in to greed.

Upstairs in the manor are the members of one of South Korea’s most profitable families. Yoon is the CEO of a dirty corporation. Doing cash transactions in the dark and the nanny after midnight, Yoon runs a shady operation. His wife, Madame Baek (Youn Yuh-jung, Mrs. Cho from The Housemaid), however, is the real shrewd plotter of the household. Crafty, mischievous, and bad to the bone, Madame Baek is a ruthlessly driven woman who gets what she wants regardless of the cost.

A stylish potboiler ensues when Madame Baek discovers that her husband is screwing the housemaid. As she did in The Housemaid, Youn Yuh-jung steals the show with a wildly entertaining bit of scene-chewing, as she plays the villain with melodramatic, over-the-top flair. “Hell hath no fury like a woman scorned,” the playwright says, and The Taste of Money puts the servants in positions of punishment and powerlessness to which The Housemaid only alluded once the envious wife in Im Sango-soo’s drama learns of her family’s deceit.

After an ugly rape shifts the dynamics of the household, Young finds himself in a strange new position. His ally in the empty house eventually becomes Baek’s only daughter, Nami (Kim Hyo-jin). Nami has a fondness and appreciation for the help that is lacking in her other family members. She sees Young as her equal. As a young girl, Nami witnessed the death of her own nanny who was driven to self-immolation as a consequence of being a toy for her wealthy masters. The same child to whom Eun-yi bowed years before, Nami refuses to let the servants bow to her.

The Taste of Money makes ample reference to its predecessor. In both plot and style, the film is a continuation. The family even watches The Housemaid (and its 1960 original) during The Taste of Money, if the familiarity wasn’t enough. The Taste of Money, however, takes the ferocious debauchery of The Housemaid and amps it up to eleven. The Baeks still wield their bulbous wineglasses as a king does his sceptre, but there’s an even bigger beer glass from which the characters guzzle this time around. Power dynamics are thwarted, themes are warped, but whoever ingests the most spirits once again reigns as king of the castle.

Lack of nutritional value notwithstanding, The Taste of Money is a spectacularly scrumptious feast. Trash, tastelessness, and taboo are rarely so yummy and entertaining. Hooked up to an intravenous of gravy, there are oodles of blood flowing through this melodramatic turkey. It’s all so ridiculous and over-the-top that one can only take a bun and sop up all the extra juices smeared along the buffet table. So satisfy your cinematic hunger: indulge on The Taste of Money and let out a big hearty burp.

The Taste of Money is available to rent on iTunes.