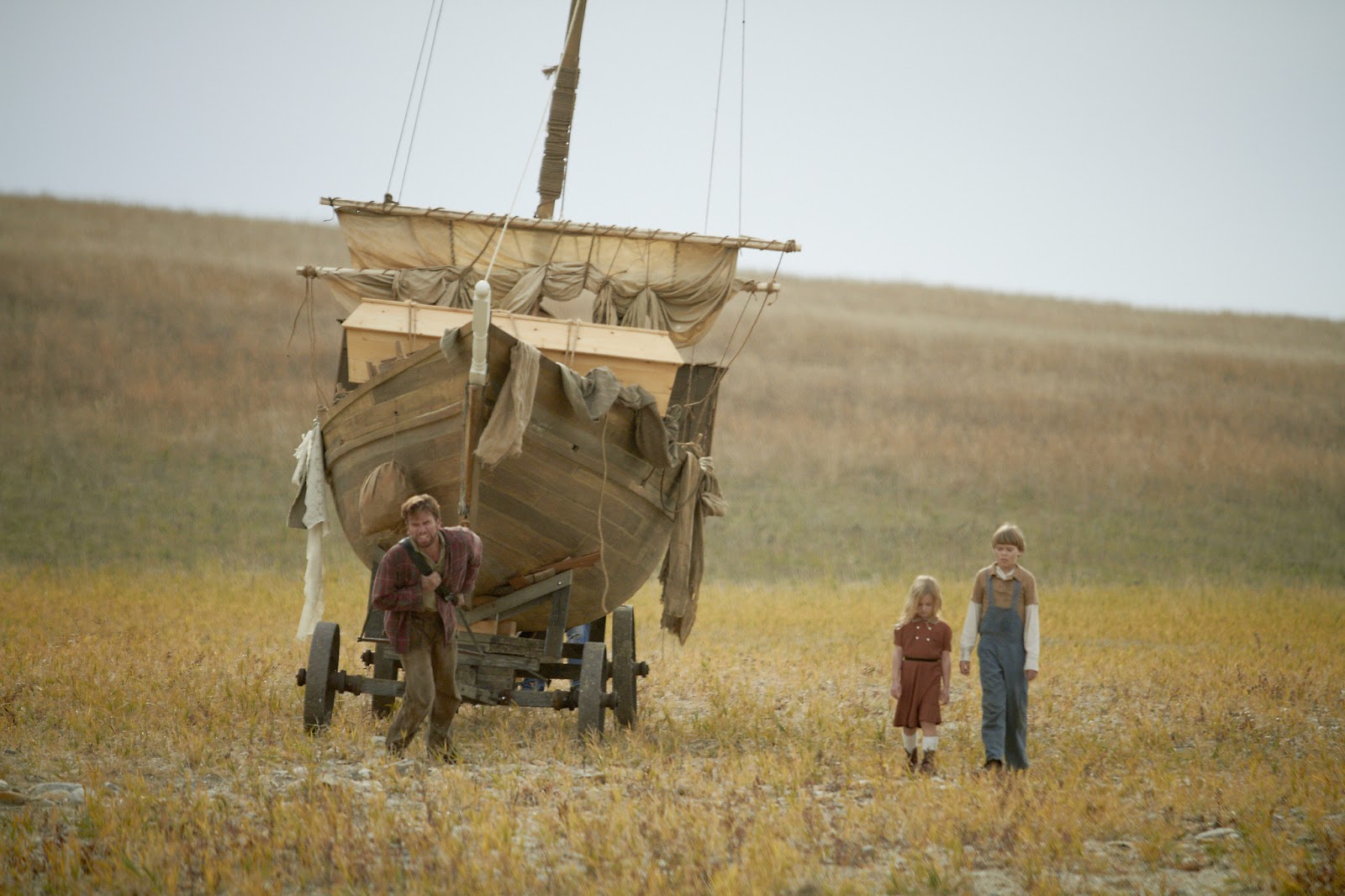 Why would anyone move to Manitoba? The prairie isn’t among Canada’s sexier provinces even though it seems like one of the country’s most avant-garde hotbeds thanks to the distorted lens of Guy Maddin. The work of Canada’s most cracked-out auteur makes the province look as if it’s trapped in a continual time warp. Perhaps it is, since most films that emerge from the province are either anachronistic (re: Maddin) or Canadian films of the Anne of Green Gables variety (see: The Stone Angel). Mad Ship, the latest Manitoban movie, falls somewhere in the middle. It has a classical, almost literary aura to it, yet it also is a visually striking piece that finds artfulness in the province’s bland dusty hillsides.

Much like in the films of Guy Maddin, or even John Paizs’ Crime Wave, Manitoba seems like a miserable place to live. Mad Ship opens with a man, Tomas (Nikolaj Lie Kaas from The Whistleblower), collapsing in the sand as he tries to escape the godforsaken place. Tomas is dragging a boat across the land, which looks more like a Biblical desert, and his struggle has him lying breathless like a fish that’s been out of water for a little too long.

Tomas moved to the prairies with his wife, Solveig (played by the striking Norwegian actress Line Verndal). The husband and wife left Norway with hopes of finding a better life. One flashback scene sees them gaze out across the rolling waves of the ocean from the rocky shoals of their homeland. Solveig teases that she can see America way down yonder. Tomas quickly rebuts her playfulness and insists that free land awaits them in America where their lives will be much better. Some turn of events brought them not to America but to Canada. Poor them.

There’s nary a drop of water to be found in their strange new land, as the place Tomas and Solveig inhabit is dry, dusty, and barren. Years of hard work tilling the land has left them worse off than they were before. They had nothing when they came to Canada, yet now the couple has an outstanding debt with their local bank, for which their banker, Cameron (Gil Bellows, House at the End of the Street), makes frequent house calls to remind them.

Solveig hates life in the prairies and wants to take Cameron’s insistence as a sign of defeat. Her homesickness is symbolized in the gramophone that provides brief moments of solace through the Norwegian records she brought from home, which are Solveig’s remaining connection to her past. Solveig’s music provides a haunting theme throughout Mad Ship, as her favourite pieces arise again to torment Tomas as he realizes the destitution to which he has brought his family.

Mad Ship captures the desolation of their experience in this foreign land with some arresting cinematography that finds the cruelty in the country’s rolling hillsides. Director David Mortin and cinematography Michael Marshall exploit the visual possibilities of the fields, finding beauty in the full wheat that sways in the wind, and seeing death and desperation in the grey dust that drains the life from Tomas and Solveig. One particular set piece, in which Tomas rises in the middle of the night and taunts the roaring winds of the land only to be countered with a booming dust storm, is a true feat of visual madness. Mad Ship, captured in a classical hue, is like an elegy for lost souls, an immigrant song with the tune of a funeral hymn.

The slow, plaintive rhythm of Mad Ship is occasionally stiff and often depressing, but, like a sturdy ship, the film is buoyed by excellent craftsmanship. A great nostalgic soundtrack by John Gzowski and smart period work by costumer Patricia Henderson (who earned a Canadian Screen Award nomination for her work) underscore the visual power of the film. Bellows, meanwhile, is effective slimy as Cameron. Likewise, the always-reliable Rachel Blanchard (Adoration) and the especially strong Martha Burns (A Wake) add much to the film in small supporting roles. Lie Kaas is a serviceable presence as Tomas, while Verndal’s sorrowful turn as Solveig gives Mad Ship much of its haunting power.

Tomas and Solveig probably stood little chance of finding success in Canada in the 1920s. How could one foresee The Great Depression during immigration? Mad Ship looks at the all-consuming desperation people like Tomas and Solveig faced when trying to piece together a new life out of nothing. (The film is inspired by a true story.) The evocative compositions of Mad Ship—both the cinematography and the score are extremely effective—convey Tomas’s mournful madness with a reflective nod to the past that resonates strongly with the economic downfall of current days.

It’s hard to see much hope in the grey horizon that Solveig sees from the porch of her unwanted home. However, the billowing sails of the ship Tomas drags across the desert promise a renewed dream and a return to better days. His Quixotic adventure is an exodus of sorts, but also a rejection of defeat. Somewhere between the madness of a Maddin movie and a Can Lit scepticism of the forceful landscape does Mad Ship find an answer. Life might be miserable in Manitoba, but escaping the prairies looks magnificent.

Mad Ship is currently playing in Toronto at the Varsity and the Canada Square.