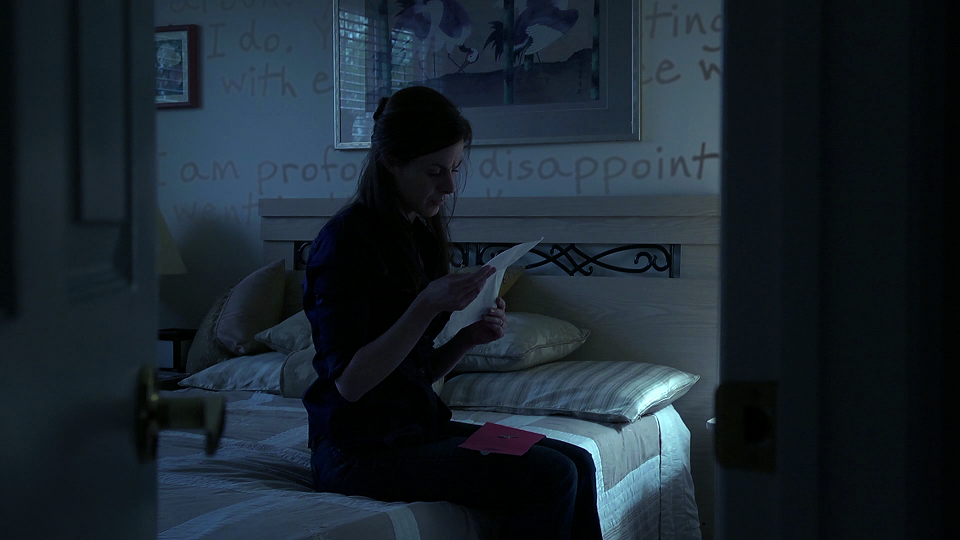 Oh, the bored middle-aged suburban house wife. No other woman, save perhaps the hooker with a heart of gold, enjoys so much pliability. She’s a versatile trope, but also one who’s open to trying new things to re-ignite the spark that’s slowly fading away. Nicole’s life, for example, looks fifty shades of grey as lensed by the cold, almost clinical cinematography in Sean Garrity’s slow-boil thriller Blood Pressure. Played by a spectacular Michelle Giroux, who makes a surprising feature film debut, Nicole is a forty-year old mother living in the GTA who works as a pharmacist and dreams of escape. Somewhere warm, Mexico say, will get her heart racing again.

Nicole’s pulse starts rising in the heart of suburbia, however, when she receives an anonymous letter from a stranger. It arrives in the mail the same day that Nicole’s husband Mike (Judah Katz) rebuffs her idea of a getaway. She might have tossed the later aside on any other day, or maybe have even called the police. The note, a love letter in spite of its stalkery creepiness, is the kind of billet-doux Nicole should receive from her husband. It tells her she’s beautiful. It tells her she’s important. It promises a life of adventure and romance.

The letter evokes the same kind of jocular persuasiveness that leads to a globetrotting nightmare in Will Ferguson’s recent Giller Prize winning novel 419. Perhaps friendly communication is a new trend in Canadian culture. Like the email received by Mr. Henry Curtis in 419, Nicole’s love-letter sounds like an answer to all her problems. When she reciprocates the note’s instructions, a chain of letters ensue and lead her on a trip more thrilling than any family vacation in Oaxaca could ever be.

Garrity superimposes the letters onscreen and evokes the sensation Nicole feels when she opens the envelope and unfolds the paper. The text appears sparingly, subtly at first—you’ll nearly miss the first draft—and then becomes assimilated into the energy of the film more forcefully as Nicole’s passion becomes fuelled and eventually engulfed by the notes from the anonymous stranger. Garrity incorporates the onscreen text rather well, as it appears as a complement to the passion it instills in Nicole while Giroux reads the letters aloud in an affectionate, tender voice.

Unlike the distracting subtitles of, say, Home Again, the visual text in Blood Pressure suggests the warmth and sense of connection one receives from personable communications that actually read like communication. Whereas the texts Nicole sends back and forth with her daughter Kat (Tatiana Maslany) are quick communiqués made simply for the sake of relaying a message, the letters from the anonymous sender allow for closeness. Their part of a relationship, while Kat’s constant texting takes away from the bond she has with her mother and vice-versa. The letters themselves are frank compositions. Honest, fully worded, clearly articulated messages—written on paper and pen, no less—seem like novelties from a bygone time.

Blood Pressure feels like an old-school product itself as the papers lead Nicole down a dark trail. This thriller builds slowly and creates a psychology for its protagonist that will be used against her in the surprising turn of its final act. As Nicole pushes herself to new limits to meet the writer’s demands, Blood Pressure compose a provocative message about the lengths to which people might go in order to escape the suffocating monotony of our impersonal communities. Garrity sets the drama in a world that captures the disconnected sprawl of Toronto, with DP Ben Licty offering some striking shots of Toronto’s smoggy cityscape and its spider-web-like expressways and busy streets.

Garrity (whose My Awkward Sexual Adventure made last year’s Canada’s Top Ten) delivers a clever thriller that relies on character and a strong sense of place. Nicole’s urge to escape plays out smartly thanks to Giroux as she takes Nicole on a remarkable arc, transforming her from a sullen, impassive defeatist to a woman empowered by life yet trapped in an all-consuming verve of passion and escapism. Giroux is joined by a cast of worthy co-stars, especially Maslany as her daughter, but this could easily have been a one-woman show.

Blood Pressure is a slow, methodically paced thriller that leads not to action, but to intriguing consequences. The morale question it raises about one’s desire for escapism are potent, especially when one must leave the darkness of the theatre and, sigh, return to reality.

Blood Pressure is currently playing in Toronto at the Carlton.
It plays in Ottawa at The ByTowne beginning May 31.