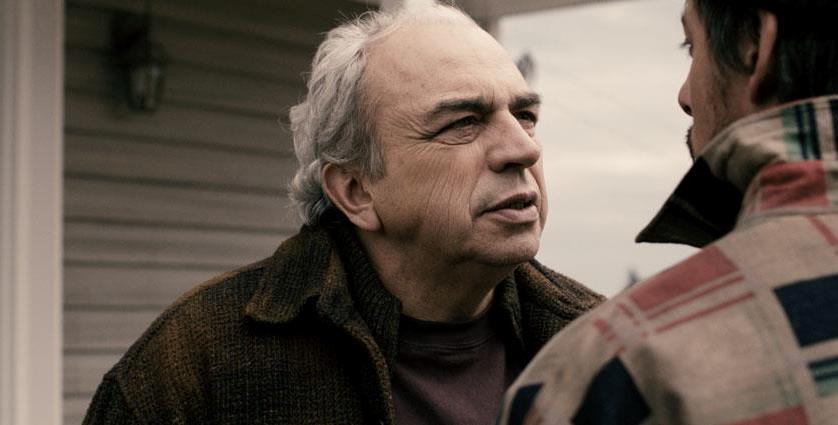 “Je me souviens.” The famous Québécois slogan, etched by Eugène-Étienne Taché into the stone of Parliament below Quebec’s coat of arms, roughly translates to “I remember.” The phrase has an ambiguous meaning for Anglophone Canadians—or it at least exists in the sense that we can grasp it, but never fully comprehend it—but it celebrates in a simple three word phrase a rich culture that exists within a larger nation. To remember means to keep something alive.

The three-word slogan creates one of the most striking compositions in Rafaël Ouellet’s beautiful film Camion (which translates as Truck). “Je me souviens,” in fact, offers the opening—perhaps establishing—shot of the film. The film begins with a close-up of the tail end of a big rig truck. Off-centre on the truck’s rear, which spans the scope of the film’s wide frame, is a licence plate that reads RCO701L. Under this number, and partly covered in mud, is Quebec’s subtitle. This truck, it seems, carries a big load of memories and some sense of itself is being obscured.

The driver of the truck is a big rig himself named Germain (Julien Poulin, in a performance of powerful subtlety). Germain quietly loads his truck with wood and then motors along the gravel roads of rural Quebec. The muddy souvenir on Germain’s truck offers an ominous foreshadowing, as the quiet, almost tranquil opening montage collides with unexpected force when Germain kills a woman with his truck when her car suddenly barrels into the frame, into his lane, and then into his truck. Camion is immediately marked by a palpable, jarring sense of loss.

Germain is devastated by the accident and feels unable to move on. A recent widower, Germain thinks like his life is an empty void and he falls into an understandable depression. His sons, Sam (Patrice Dubois) and Alain (Stéphane Breton) also seem to be at a crossroads. Sam feels restless with his dead-end job as a janitor, while Alain lives in a motel and cannot work due to an injury. To help heal their father—and, ultimately, themselves—Germain’s sons make a road trip home.

At the centre of this road-movie-cum-family-drama is the truck itself. It’s not out of commission, but rather only in need of a much-needed tune-up. Aside from general slight motor maintenance and cosmetic refinishing, nothing about the truck is ruined. There’s only the negative memory that Germain cannot erase from his mind.

Germain’s journey with his boys eventually leads him back behind the wheel. In a vaguely open-ended finale, Germain returns to the driver’s seat and admires the snow that falls on the other side of the windshield. He learns to remember the good times, rather than one tragic affair.

Writer/director Rafaël Ouellet keeps this family drama sparse and intimate, often letting the actors’ faces or the ragged rocks of the land create the power for him. There’s an undeniable sense of reparation between Germain, his sons, and the land that draws them together. Like last year’s Wetlands (Marécages), Camion has a distinct and uncontrived feel for the citizens in the Canadian Francophonie and their connection to the land. If the family in Wetlands feels a sensual pull with the earth, the family in Camion enjoys the workings of the outdoors as a return to their roots. The more that Germain and his boys work together—splitting wood, bringing in the dock—the more they expose old memories that have long been in need of repair.

Like Wetlands, Camion notes the endurance of a Québécois culture. During one scene near the midpoint of Camion does Sam hear on the radio an interview with a politician who voices his perception of a culture resisting assimilation with America. Wetlands makes similar reference to the invasion of American culture, yet only through a pop song that drifts over the airwaves of the radio. If Wetlands feels like a family in utter isolation struggling to survive, though, the family in Camion comes across as part of a larger community, as they learn to adapt and they aren’t afraid to use a little Franglais to relate to their peers.

Marked by a expressively melancholy and refreshingly natural lensing by DP Geneviève Perron and an evocative score by Vivane Audet, Robin-Joël Cool, Éric West-Millette, Camion is a remarkable slice-of-life portrait of the working class. The film offers one of the most affective soundtracks in recent Canadian cinema, as sombre folk songs accentuate the mood or subtly voice the emotions that the family members struggle to articulate. Anyone who sees Camion will surely be moved the minimalist guitar riffs or the haunting ballads. One scene, for example, sees Alain press play on Richmond Fontaine's "I Fell into Painting Houses in Phoenix, Arizona" and then gush to his brother about the song's sorrowful depiction of directionless blue collar Joes like themselves. Ouellet then allows the song to play at length as the brothers finish their drive. What acts merely as a "favourite song" moment in other films works in Camion as a poignant road map. Most powerful, however, are the occasional rumbles of trucks that pass by Germain’s home and punctuate the silence of his grief.

Camion is a great film, and it’s surely another film that people will cite whilst insisting that the best Canadian films are all coming out of Quebec. There’s a distinct sense of minimalist artistry and atmosphere to Camion, and it sits comfortably in a growing mode of films that celebrate their local character with near-universal clarity. However, the open ending of the film, marked by Germain’s nostalgic, pensive look as he observes the falling snow from behind the wheel of his truck, evokes a kind of sensation that can’t really be explained in language. Rather, its strength is felt in the powerful afterthought of remembering.

Camion screened in Ottawa at The ByTowne as part of DiverCiné.