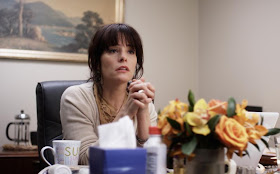 Price Check is a shopping spree of Parker Posey goodness. The Queen of the Indies once again enjoys a great role at bargain bin prices and offers another fun, manic performance. Price Check could have easily gone the way of a clearance sale with another actress in the lead, but Posey’s charm gives the film a decent shelf life.

Posey stars as Susan Felders, an ambitious career woman working her way up the retail ladder of a discount grocery chain. In order to cut company costs and put a gold star in her portfolio, Susan takes the lead of a fledgling pricing team in Long Island. Her neurotic, type-A personality clashes with her team of office drones, all of whom seem primed for a long career at Dunder Mifflin. The office’s stuffiest square is Pete, played by a stiff Eric Mabuis, a mid-level player in the grocery chain who wants to quit the biz and return to the music biz. Pete, however, is seduced by Susan’s aggressive ball-busting and he settles for a long-term commitment when she offers him an executive position. Much like how Susan walks in and saves the company, Posey takes control of the film even though she’s cast as second fiddle to a bland male lead.

With the presence of Posey, one can only imagine what a filmmaker like, say, Hal Hartley could have done to draw out the satirical elements in Price Check. Writer/director Michael Walker’s plain, low-budget beige/grey environment seems indebted to Hartley’s Jersey-set satires, as it crafts a semi-self-aware farce that sees its players corrupted by ambition, trouble, and desire. It’s droll situational humour played out against a fluorescent din. Price Check is Hartley at a discount, though, as it offers an enjoyable musing on 21st century values—capitalism, the family, and such—without treading too far into scathing critique or clever comedy.

Like many a good Hartley film, however, Price Check is worth the time for Parker Posey alone. Fans of the actress should enjoy watching Posey bring her brittle character to life. (She even sings!) Susan is a ferociously unlikable character thanks to Posey’s cutting sarcasm and hilariously dry take on the corporate-grade bitch boss. Few actors can make jokes about groceries sound funny, and Posey puts the situation humour in the cart and takes it to the checkout. Thanks to Parker Posey, Price Check should avoid handing out any refunds.