'This is Not a Kids' Movie' 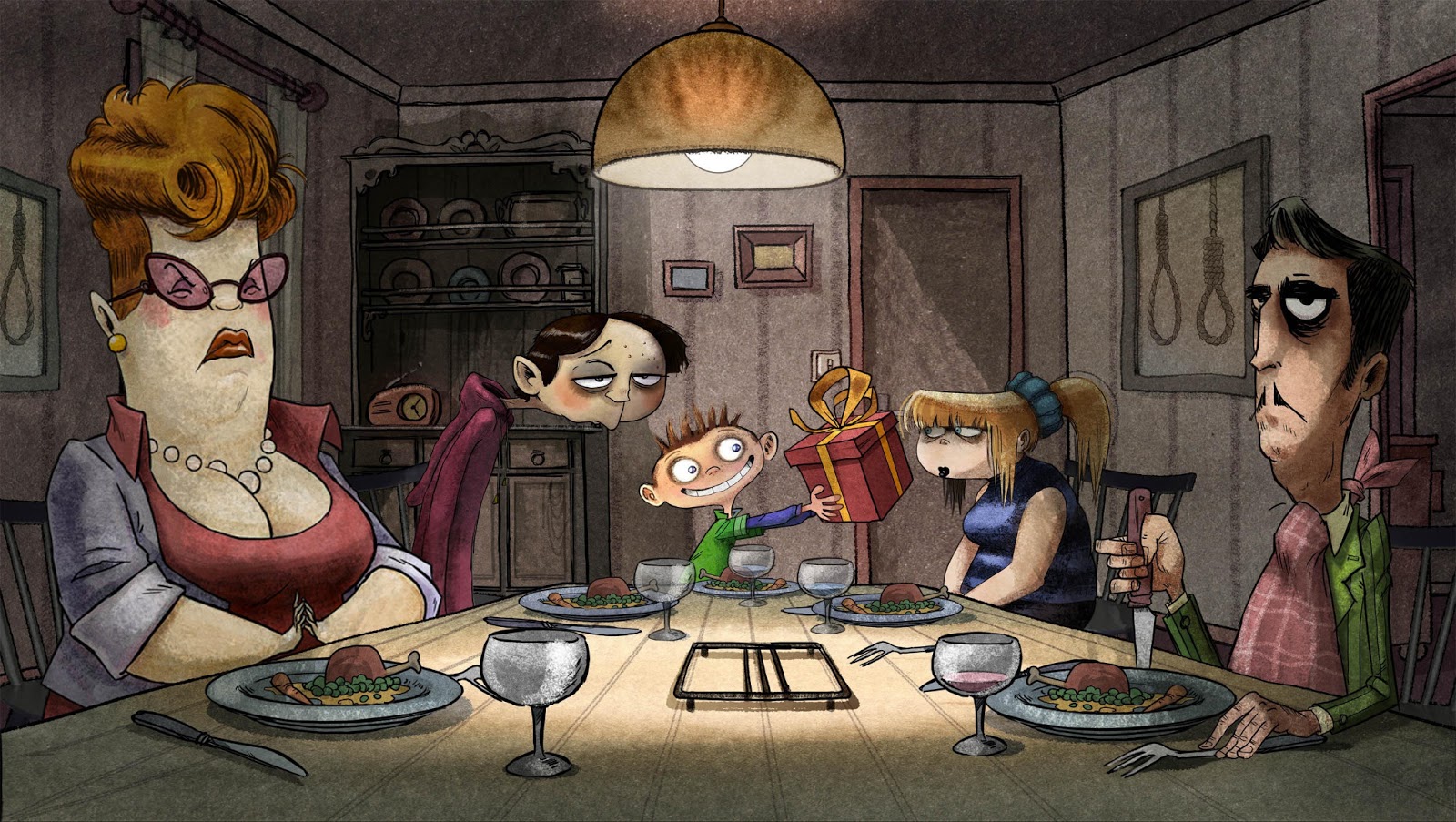 What is it about death and pigeons? Michael Haneke’s Amour, for example, features two startlingly ambiguous moments in which pigeons provide comic relief from a sombre tale of death. A fleeting image of mortality, Haneke’s pigeon unsettles you in the way that an aerial assault from the dirty bird would ruin your day. Another French master, Patrice Leconte, opens his film with a pigeon flight of life and death. As one pigeon flies through the air during the opening sequence of The Suicide Shop and navigates the human bodies that drop from the sky, its animated eyes and funny jowls set the mood for a comical affair. Then the pigeon joins its mates on a lamppost right before one of its comrades says adieu and dive bombs to the sidewalk. This is not a kids’ movie.


The Suicide Shop is as far as one can get from animated films of the “happy working song” variety. It’s a morbid tale of contemporary malaise in the streets of Paris, as Frenchmen drop like flies to escape their dull, pointless lives. “The recession creates depression,” sing the Parisians as they off themselves in the film’s introductory number. The Suicide Shop, an incongruous musical, turns death into a strange, playful, and surprisingly upbeat experience.

So many Frenchies are killing themselves that the government has decided to make suicide a crime. A ticket for your loved ones adorns your corpse after the po-po arrive to the scene of the crime, so suicide leaves an additional unpleasantry for the ones you leave behind. On the other hand, a botched suicide attempt leaves one in a worse state than before: depressed, alive, probably injured to some degree of severity, and ridden with a ticket to pay. Hence The Suicide Shop – one-stop shopping for an efficient kill.

La famille Tuvache runs the business with a flair for tragedy. Customers always seem satisfied since nobody ever returns and asks for their money back. It’s a place where the transaction ends with au revoir rather than à bientôt. It’s harder to be happy than it is to be sad, and the Tuvache’s Suicide Shop is merely an extremity in ventures that profit from the misery of others.

The Suicide Shop is a humourless place until Mme. Tuvache has a baby. Her son, Alan, brings an infectious smile to the shop. Customers seem to hesitate around this cheery child, as little Alan reminds them of better times.

Alan displays the kind of innocence that only a child can have. He’s too young to be corrupted by the misery and suffering of things like disappointment and debt. Alan, born with a smile on his face, seems like some weird miracle baby destined to save the French. As Alan grows in The Suicide Shop, he plans new tricks to thwart suicides and to turn frowns upside down. Happiness seems like an innate quality in Alan; it’s as if humans are born to be happy, but they learn to be depressed by some form of social conditioning.

The Suicide Shop finds humour in our downtrodden dumpiness. If we can acquire misery, we can surely find joy in everyday things, too. The sparse songs of the film rise with a gradual bubbliness, going from elegies to optimistic choruses. Not all the verse and melodies translate well from French to English, but the quirky death ditties are fun in their own gloomy fashion. Even though it’s a movie about self-inflicted death, The Suicide Shop brings an unexpected smile.

Leconte creates this strange, surprising energy by offering the musical as an animated tale. Suicide seems less taboo when it’s discussed by dark quirky characters with singsong dialogue. The animation also creates The Suicide Shop’s striking tone, as the film’s colour palette helps the viewer shift moods as one might with seasonal affective disorder. The film enjoys a dreary desaturation during its first act, or whenever M. or Mme. Tuvache fills the screen, and it gains a cartoonish vibrancy every time Alan bounces into the frame and tries to brighten the mood. With a simple change in hue, The Suicide Shop puts us down or picks us up.

Suicide might be painless, but this animated film shows that living is a lot more fun. Even the pigeons—the greyest of the birds—learn to live a little and join in the film’s upbeat, optimistic ending. Georges and Anne might have faced a different outcome had a pigeon graced their apartment with a little song and dance, but that’s an entirely different movie. At least until Michael Haneke sets his eyes on Mickey Mouse.

The Suicide Shop screens in Ottawa at The Mayfair until Wednesday, March 6th.